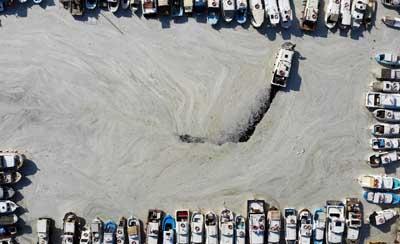 Turkish researchers have stepped up their efforts to determine the reasons behind mucilage, which has covered swathes of the Marmara Sea, south of Istanbul, and effective methods to clean it up, as authorities continue their intense cleaning works.

A team from Istanbul University has succeeded in cleaning mucilage formed on the surface of the Marmara Sea with marine bacteria in its natural environment.

The pilot study was initiated at an Istanbul harbor in order to eliminate mucilage in its natural environment with beneficial bacteria.

After a barrier was laid on the sea to surround the mucilage, local bacteria selected by the project team among the bacteria that were previously isolated from the sea and whose metabolic properties were suitable for decomposing the mucilage was placed in the area every morning and evening.

Istanbul University academic Gülşen Altuğ told state-run Anadolu Agency they started the project under controlled conditions and collected samples from the area prior to its implementation.

“We applied local bacterial isolates that we have picked from the seas for 20 years to the mucilage-covered area,” she said, adding there was a dilution in the distribution of mucilage on the surface after the first application.

After the third application, the dilution was more obvious and the mucilage formation was almost cleaned, she noted.

She stressed that the mucilage did not sink to the bottom of the sea either.

“This bacteria restricts disease-causing bacteria in the environment, decomposes nutrient organic matter and contributes to the marine ecosystem cycle by breaking down leaves, dead organisms and wastes in the sea in normal times when there is no mucilage,” Altuğ said.

Meanwhile researchers from Turkey’s Middle East Technical University (ODTÜ) will use a research ship to investigate the effects of the “sea snot,” or mucilage, at the lowest point in the Sea of Marmara at 1,210 meters.

The Bilim-2 vessel collects data from 100 stations in the sea as part of the Marmara Sea Integrated Modeling System (MARMOD) Project.

ODTÜ scientists will focus their research in the depths of the Marmara Sea, especially on the formation of hydrogen sulfide.

Mustafa Yücel, an academic from ODTÜ, said samples taken by a water measuring device from 100 different stations are analyzed in the laboratory of the ship.

Yücel said they have recently focused their work on the examination of the samples and on a modeling study to create a high-resolution digital twin of Marmara Sea as part of the project.

Underlining the importance of the creation of the digital twin, Yücel said: “By looking at this twin, it will be decided to what extent the reduction of the loads in the sea will affect the cleanliness.”

He said their current findings suggest that the mucilage settles 40-50 meters beneath the sea surface.

“We see that mucilage production continues in the sea and the agglomeration is in the sea. It is observed that the mucilage rises from the bottom of the sea,” he noted.