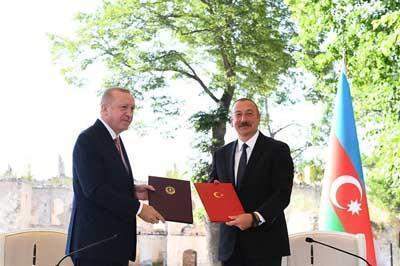 Turkey and Azerbaijan have signed a protocol of alliance in a bid to further strengthen their ties following the latter’s victory in Nagorno-Karabakh that liberated occupied Azeri lands from Armenian occupation.The protocol was signed between President Recep Tayyip Erdoğan and Azerbaijan President İlham Aliyev in Shusha, a city liberated by the Azeri army during the six-week armed conflict between Azerbaijan and Armenia in late 2020.“With the Shusha Protocol, we have determined the road map of our relations in the new term. It’s very important that this protocol has been materialized in Shusha. This protocol contains a lot of aspects of our relations as well as the vision in regards to our region,” Erdoğan told a press conference with Aliyev.Aliyev, for his part, said they will never forget the support Turkey has lent during his country’s efforts to liberate its lands.Erdoğan informed that Turkey is planning to open a general consulate in Shusha in a bid to intensify Turkey’s contribution to Azerbaijan’s reconstruction of the Nagorno-Karabakh region.“We will also contribute to Azerbaijan’s efforts to reconstruct the region in the way we did for the liberation of its territories,” the president said, appreciating Baku’s intensified infrastructure works in the region.“We call on everybody to look at the future. There are new cooperation opportunities for everybody. We, as Turkey, want to further deepen our geographical relations through cooperation,” he stated.Recalling Turkey’s calls for a regional initiative with the participation of six countries, including Turkey, Azerbaijan, Georgia, Russia, Iran and Armenia, Erdoğan called on Yerevan to positively respond to these calls for peace and stability.In case all the parties would abandon hate politics and provocations in the region and Azerbaijan and Armenia would sign a comprehensive peace agreement, then Turkey will take steps for the normalization of its ties with Yerevan, Erdoğan stated.

According to the Anadolu Agency, the protocol suggests “In the event of a third state’s threat to the independence or territorial integrity of any of the parties, the parties will provide the necessary assistance to each other.”

The parties make joint efforts to resolve regional and global security and stability issues, it reads, adding “The parties state that the military-political cooperation developed between the two states and in line with their interests is not against third states.”