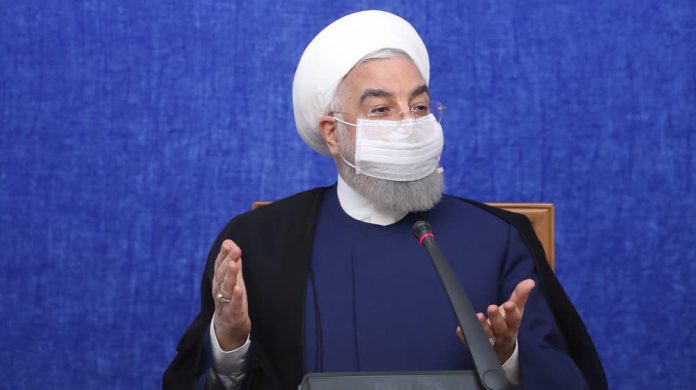 https://www.presstv.com-Iran’s President Hassan Rouhani addresses a meeting with his administration’s economic coordination staff in Tehran on June 15, 2021. (Photo by president.ir)

Iran’s President Hassan Rouhani says documents revealing the severity of the economic war launched against Iran during past years through the imposition of tough sanctions must be made public to inform the entire world of the inhumane crime committed by the former US president, Donald Trump, against the Iranian nation.

Rouhani made the remarks in a Tuesday meeting with his administration’s economic coordination staff, in which the impact of the economic war launched by the United States against the Islamic Republic and the effects of the coronavirus pandemic on Iran’s economy were discussed.

“In order to enlighten all the people, documents related to the imposition of the economic war [on Iran] and actions taken by those who imposed broad-based and unprecedented sanctions [on Iranians] must be made public, so that the entire world would know about the inhumane crime committed by the Trump administration against the Iranian nation,” Iran’s president said.

As a victim of such an inhumane measure, Iran will present the world with the document attesting to the crime committed by those who have imposed sanctions on the country, Iran’s chief executive emphasized.

While the Trump administration described its anti-Iran measures as the “maximum pressure” policy, Tehran slammed the measures as “economic war,” “economic terrorism” and also “medical terrorism,” maintaining that the sanctions have severely harmed Iranians but failed to bring the nation to its knees.

Meanwhile, the new US administration of President Joe Biden has conceded that the so-called maximum pressure campaign has failed, promising to replace it with a new policy.

Elsewhere in his remarks, Rouhani elaborated on the Iranian nation’s resistance and his administration’s plans in the face of the US economic war, with the final goal of defeating those who imposed sanctions on the country.

“In addition to documenting Trump’s crime, which impeded development and progress of a country and a nation and inflicted great harm on people’s livelihood and even their health and medical needs, the resistance [of the Iranian nation] and details of [Iran’s] handling of the [US] economic war must be documented for the world as well,” Iran’s president said.

In an address via videoconference to the 10th summit of the D-8 Organization for Economic Cooperation, also known as Developing-8, last month, Rouhani said the economic war waged by the United States has totally failed and all measures taken by Washington to bring Tehran to its knees have been proven futile.

“Here, I am honored to announce that all illegal unilateral measures taken by the United States to bring the Iranian nation to its knees have failed,” he added.