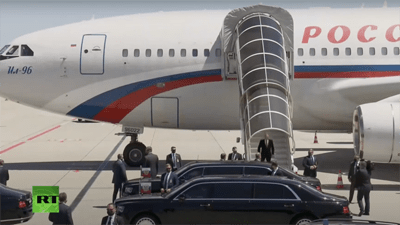 Russian President Vladimir Putin’s plane has landed in the Swiss city of Geneva ahead of Wednesday’s long-awaited summit with his American counterpart, Joe Biden. The two will soon meet for the first time since Biden took office.

The Russian leader, who arrived at Geneva Airport in the Ilyushin Il-96 presidential aircraft, will now set off for the Villa La Grange, a historic 18th-century villa with a beautiful view of Lake Geneva. He took off from the southern Russian city of Sochi at around 10:15am local time (9:15am CET).

Putin’s motorcade will pass through the Swiss city on the way to the stately home. As well as a heightened level of security, Geneva has also been decorated for the occasion, with the city’s main bridge, the Pont du Mont-Blanc, lined with both Russian and US flags.

The landmark summit was initially proposed by Washington and marks the first Russia-US summit since Putin met with then-President Donald Trump in Helsinki in July 2018. That encounter was somewhat chaotic, and Moscow will hope that today’s encounter leads to more substantial results.

The meeting is expected to last about four or five hours and, as of yet, there are no specific plans for a one-on-one discussion between the two leaders, although it may happen if they both favor that option. Putin plans to return to Russia this evening.

Alongside Putin will be Russian Foreign Affairs Minister Sergey Lavrov and Kremlin spokesman Dmitry Peskov, as well as Anatoly Antonov, the Russian ambassador to Washington, and military Chief of General Staff Valery Gerasimov, among others.

Biden’s entourage includes Secretary of State Antony Blinken and National Security Advisor Jake Sullivan, as well as US Ambassador to Russia John Sullivan and Victoria Nuland, the under secretary of state for political affairs. The latter is regarded as a controversial figure in Russia, due to her role in the 2014 Kiev Maidan, and she has previously been refused a visa to the country.

According to Yury Ushakov, a Russian diplomat and long-time aide of Putin on foreign policy matters, the two heads of state will talk about a wide range of topics, including the Covid-19 pandemic, the war in Eastern Ukraine, and the fight against cybercrime. They are also due to discuss other areas for cooperation, such as climate change, the Arctic, and the Middle East.