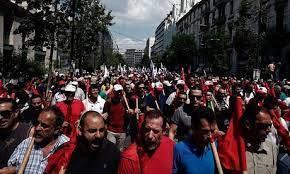 Lebanon sees a nationwide general strike called by the General Labor Union on Thursday, protesting the dire economic and financial conditions and the delayed cabinet formation.

The strike garnered support from Lebanon’s wrangling political parties, including those in power.

The strike aims to protest political leaders’ failure to form a much-needed government to steer the country out of its multiple crises.

General Labor Union head Beshara el-Asmar asked in a statement the “economic bodies, merchants’ organizations, the Association of Banks in Lebanon to back the strike and allow employees and workers to participate in this national day.”

Several political parties, including al-Mustaqbal Movement and the Free Patriotic Movement, said they intend to take part in the movements. Similarly did the Association of Banks in Lebanon.