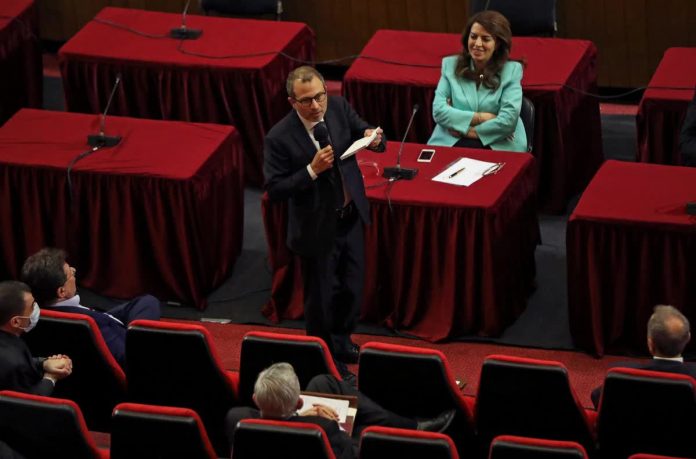 PARIS/BRUSSELS, June 18 (Reuters) – Criteria for European Union sanctions being prepared for Lebanese politicians are likely to be corruption, obstructing efforts to form a government, financial mishandling and human rights abuses, according to a diplomatic note seen by Reuters.

Led by France, the EU is seeking to ramp up pressure on Lebanon’s squabbling politicians after 11 months of a crisis that has left Lebanon facing financial collapse, hyperinflation, electricity blackouts, and fuel and food shortages.

The bloc, which has been holding technical discussions on possible measures for the last month, has yet to decide on which approach to take, but foreign policy chief Josep Borrell is due in Lebanon this weekend and will report back to foreign ministers on Monday.

As many senior Lebanese politicians have homes, bank accounts and investments in the EU, and send their children to universities there, a withdrawal of that access could help focus minds.

Paris says it has already taken measures to restrict entry for some Lebanese officials it sees as blocking efforts to tackle the crisis, which is rooted in decades of state corruption and debt, although it has not named anybody publicly.

The EU first needs to set up a sanctions regime that could then see individuals hit by travel bans and asset freezes, although it may also decide to not list anybody immediately.

The note, which also outlines the strengths and weaknesses of taking such a measure, focuses on four criteria. It begins with obstructing the establishment of a government, the political process or the successful completion of the political transition and then turns to obstructing the implementation of urgent reforms needed to overcome the political, economic and social crisis.

Financial mishandling, which would target people, entities or bodies believed to be responsible for the mismanagement of public finances and the banking sector, is also a core criteria as is the violation of human rights as a result of the economic and social crisis.

“It might be argued that the lack of political responsibility of the leadership in Lebanon is at the core of a massive implosion of the economy,” the note reads, referring to the possible human rights criteria.

“This has led to significant suffering and has affected the human rights of the population in Lebanon.”

Such diplomatic notes are common in EU policymaking, circulated among EU diplomats and officials, although they are not made public.

The note also says an “exit strategy” proposing benchmarks for establishing whether the sanctions regime has served its purpose as well as for renewing or lifting individual designations should also be put in place.

How quickly sanctions could be imposed is still unclear, but with political divisions continuing to worsen, the bloc is likely to press ahead before the summer holiday period.

There are divisions among the 27 EU states over the wisdom of EU sanctions, but the bloc’s two main powers, France and Germany are in favour, which is likely to prove pivotal. A larger group of nations has yet to specify their approach.