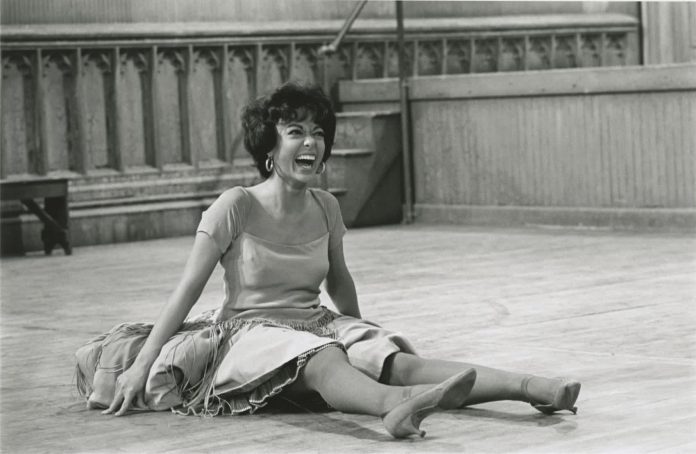 Rita Moreno emigrated with her mother from Puerto Rico at age five. By six, she was dancing at Greenwich Village nightclubs. By 16, she was working full time. By 20, she was performing in “Singin’ in the Rain.”

“I can’t think of anyone I’ve ever met in the business who lived the American dream more than Rita Moreno,” Norman Lear says in the documentary “Rita Moreno: Just a Girl Who Decided to Go for It.”

In the decades that followed, Moreno has won a Tony, a Grammy, an Emmy and and Oscar, for “West Side Story.” (Her entire acceptance speech: “I don’t believe it.”) With seemingly infinite spiritedness, she has epitomized the best of show business while also being a victim to its cruelties. That has made Moreno, who co-stars in Steven Spielberg’s upcoming “West Side Story” remake, a heroic figure to Latinos, and to others. “I have never given up,” she said in a recent interview by Zoom from her home in Berkeley, California.

The reason for the conversation was Mariem Pérez Riera’s intimate and invigorating documentary, which opens in theaters Friday after playing virtually at the Sundance Film Festival and at an outdoor premiere at the Tribeca Festival. The film opens with Moreno preparing a Cuban themed party for her 87th birthday. “And I demand costumes,” the screen legend says with a smile.

As upbeat as Moreno remains, “Just a Girl Who Decided to Go for It” also deals frankly with the many turbulences of Moreno’s life: being positioned as the “Spanish Elizabeth Taylor” and the stereotyped casting that followed; a long and painful relationship with Marlon Brando; the abuse of her agent; a confining marriage.

Remarks have been edited for clarity and brevity.

What struck me most watching the film is that despite going through what would defeat or embitter most, you seem to have emerged with such joy and appreciation for life.

Moreno: I have a very strong constitution. Maybe you inherit it. Maybe it’s due to learning how to cope with my tumultuous life through psychotherapy. I really credit that for helping me through some really, really bad times. My mom was like that, too. And you know what? I have a feeling that a lot of people who are outliers have strong constitutions because it’s either sink or swim, right? And I think you learn early on in life that swimming is preferable to sinking.

How early did you learn that?

Moreno: The first test, I think, was learning English in kindergarten when I didn’t know a word, not a word. That’s the first thing that happened to me literally when I came to this country. Children are impressively resilient. And then, in a way, they’re also extremely tender and fragile. I think the reason I ending up having such a hard time in life is that I ran into a racial bias very early on. When you’re young — I mean 5, 6, 7 — and people call you bad names like “spic” or “garlic mouth” or “gold tooth,” like in “West Side Story,” you’re tender, you’re a child. You believe these things. You believe that you’re not worthy.

Your life seems to be this long process of unlearning the cruel or wrong things you were told about yourself.

Moreno: What a wonderful way to put it. You’re absolutely on the money. I had to learn that I was a person of value like all other people. But it’s very difficult when you learn something from childhood. It’s not as though I came to this country when I was 20 and learned something different. I was a little girl and you’re very impressionable. You believe that you don’t have value. You don’t know why you don’t have it, but you believe it. And, man, that is so hard to get rid of.

Your central therapy session followed years with Marlon Brando. In your memoir, you spoke about him as your greatest lover but your time with him was torturous.

Moreno: Here’s what’s hilarious to me. It was he who said to me: “You need help. You need therapy.” So the lunatic is telling the crazy woman that she needs help! (Laughs). But he was right! He was right. I remember the day he said that to me, I thought: “Yeah, but he’s crazy as a loon!”

After “West Side Story,” you’ve said you were offered only similar, stereotypical roles for years.

Moreno: Those were brutal. Brutal! When I got the Oscar and the Golden Globe, I thought: “OK, finally.” And that’s not what happened at all. In fact, it was the opposite. I was offered more Anita-type roles when I was offered something, which was not that frequent. I made a decision not to accept any more of those kinds of roles. It was a lot of coffee pourers, housewives and stuff. I said I’m not going to do them anymore. Ha-ha, I showed them. I didn’t make a movie for seven years. I mean, how stubborn can you get?

You recently revisited “West Side Story” with Spielberg. How was that?

Moreno: It was just grand. I’ve been a fan of Steven’s work for years. When he called, he offered me a part in “West Side Story.” I nearly peed my pants because this is Steven Spielberg, one of my idols. I said to him that I would love to do a cameo, but I said, “You don’t really want me to do that, do you?” And he said, “Oh, no, no. It’s a part. It’s a real part. Tony Kushner wrote it for you.” First of all, Tony Kushner’s writing the script? What! I was thrilled. I was excited the way a child would be excited.

I don’t imagine you do, but do you have any regrets?

Moreno: If I can’t have all the movies I always wanted to be in — which are all the Meryl Streep movies, I wanted to be her — but if I can’t do that, I’ve done pretty well, considering. And I think I’ve left an important legacy in a very, very meaningful sense and that is: That I have never gave up.