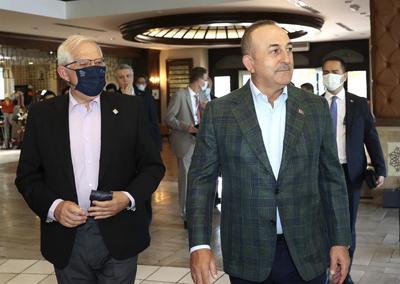 Top Turkish and European diplomats held talks on June 18 to discuss Ankara-Brussels relations ahead of a key EU Council meeting slated for June 24 and 25.

Foreign Minister Mevlüt Çavuşoğlu and the EU’s high representative for security and foreign affairs, Josep Borrell, met on the sidelines of the Antalya Diplomacy Forum that was launched by the former’s introductory speech.

“[We] discussed Turkey-EU relations, especially the modernization of the Customs Union, migration and visa liberalization with EU High Representative Josep Borrell, who is in Antalya for SEECP and ADF meetings,” said Çavuşoğlu on Twitter. There was no joint statement.

The two men discussed in detail the Turkey-related agenda of the upcoming EU Council meeting in Brussels.

Turkey is expecting a formal green light for the start of the negotiations for the modernization of the customs union. The EU Council in late March signaled that a necessary mandate could be given to the EU Commission to start talks with Turkey. Also, the EU Commission is expected to inform its preliminary work for the renewal of the migration deal of 2016.

It’s less likely to observe a progress on the visa liberalization, according to sources.

President Recep Tayyip Erdoğan reiterated Turkey’s expectations from the EU at the opening speech of the SEECP meeting.

“It’s not possible for the EU to reach its target of becoming a center of power and attraction without Turkey as a full member. We want to accomplish our half-a-century-long struggle to the accession of the EU,” he stated.

The EU should abandon its strategic blindness and improve ties with Turkey in the context of the positive agenda, Erdoğan stressed.