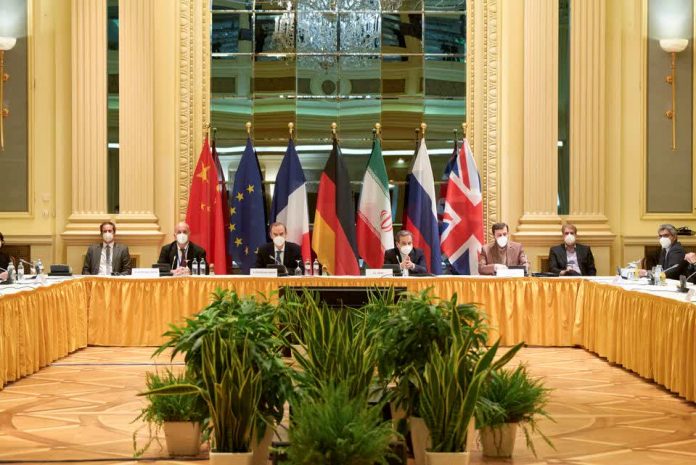 DUBAI, June 20 (Reuters) – Negotiators for Iran and six world powers on Sunday adjourned talks on reviving their 2015 nuclear deal and return to respective capitals for consultations as remaining differences still need to be overcome, officials said.

“We are now closer than ever to an agreement but the distance that exists between us and an agreement remains and bridging it is not an easy job,” Iran’s top negotiator Abbas Araqchi told state TV from Vienna. “We will return to Tehran tonight.”

After more than a week of negotiations in their latest round, parties to the pact wrapped up with Russia’s envoy saying no date for a resumption in negotiations had been set for now, although he suggested they could return in about 10 days.

Negotiations have been going on in Vienna since April to work out the nature and sequencing of steps Iran and the United States must take on nuclear activities and sanctions to return to full compliance with the nuclear pact.

Ebrahim Raisi, a hardliner and fierce critic of the West, won Iran’s presidential election on Friday and will take office in early August, replacing pragmatist Hassan Rouhani, under whose aegis the 2015 deal was struck.

But Raisi’s rise is unlikely to disrupt Iran’s effort under Supreme Leader Ayatollah Ali Khamenei, who has final say on all major policy, to restore the nuclear pact and be rid of tough U.S. oil and financial sanctions.

The United States under then-President Donald Trump left the deal in 2018, branding its terms too weak to remove the risk of Iran developing nuclear weapons potential, and reimposed sanctions on the Islamic Republic.

Iran has since breached the deal’s strict limits on uranium enrichment, a possible path to a nuclear bomb. It has said its moves would be reversed if the United States rescinded all sanctions.

U.S. National Security Adviser Jake Sullivan said disagreements over how to save the deal persisted, repeating that the ultimate decision on the issue lay with Khamenei.

“There is still a fair distance to travel on some of the key issues, including on sanctions and on the nuclear commitments that Iran has to make,” Sullivan told broadcaster ABC News. He added that the question of which sanctions on Iran should be lifted was still being discussed.

Iranian Foreign Minister Mohammad Javad Zarif said he had edited the text of a possible deal being discussed in Austria, saying it was getting “cleaner and cleaner”. He said there was a good possibility a deal could be reached before mid-August when the current Iranian administration leaves office.

With the talks on pause, attention will now turn to extending a separate accord between the International Atomic Energy Agency, the U.N. nuclear watchdog, and Iran. That pact, expiring on June 24, aims to cushion the blow of Tehran’s decision to reduce its cooperation with the IAEA by ending extra monitoring measures introduced by the 2015 deal.

Mora said he expected the two sides to reach that deal.

The Islamic Republic’s arch-enemy, Israel, on Sunday condemned Raisi’s election. New Prime Minister Naftali Bennett said it would be a “regime of brutal hangmen” with which world powers should not negotiate a new nuclear accord.

“(His) election is, I would say, the last chance for world powers to wake up before returning to the nuclear agreement, and understand who they are doing business with,” Bennett said in a statement.

Raisi has never publicly addressed allegations around his role in what the United States and human rights groups have called the extrajudicial executions of thousands of political prisoners in 1988. He is under U.S. sanctions over that past.

Bennett, a nationalist atop a cross-partisan coalition, has hewed to the opposition of conservative predecessor Benjamin Netanyahu to the nuclear deal, whose caps on projects with atomic bomb-making potential Israel deemed too lax.

CREDIT FOR A DEAL

Raisi, like Khamenei, has supported the nuclear talks as a route to cancelling U.S. sanctions that have laid waste to the Islamic Republic’s oil-based economy and dramatically worsened economic hardships, stirring widespread discontent.

The new government will hope to claim credit for any economic benefits arising from the revival of the accord, something the outgoing administration might clinch before Raisi takes office.

“If the deal is finalised when Rouhani is (still) president, Raisi cannot be criticised by hardline supporters for giving concessions to the West,” a government official who is close to the talks told Reuters. “Also Rouhani, not Raisi, will be blamed for any future problems regarding the deal.”

Several Iranian officials told Reuters that the country’s current negotiating team would remain intact at least for a few months under Raisi’s presidency.

“Who Raisi picks as his foreign minister will reveal the new government’s foreign policy approach,” said another official. “But the establishment’s nuclear policy is not decided by the government” but by Khamenei.