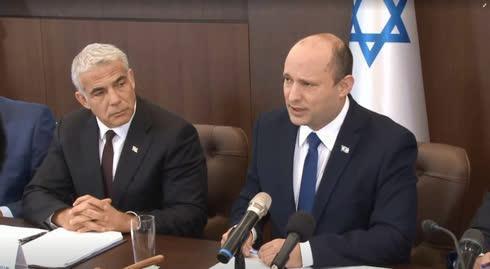 Opinion: The new Israeli government must take the initiative in key areas, in particular moving quickly to repair ties with the U.S. Democratic Party and with American Jews and launching a diplomatic initiative that attempts to resolve the conflict with the Palestinians

Without getting into the political-social complexities that await us and the new government, it is worth reminding Prime Minister Naftali Bennett, Foreign Minister Yair Lapid and Defense Minister Benny Gantz of several foreign policy principles that even the polarized incoming government can accept.

Israel’s strength lies in a combination of shared values and long-term interests, and not in short-term interests alone. True, our liberal friends are often critical of us, but since when does Israel fear criticism?

U.S. President Joe Biden is a true friend, but he does not operate in a vacuum. So are the diverse streams of the American Jewish community.

The required initiative would be based on international principles and resolutions that have been acceptable to all Israeli governments, such as the UN Resolutions 242 and 338 and the “road map to peace” put together by the administration of George W. B.

This initiative must take into account the dramatic changes in the region over the past decade, including the achievement of the former government in normalizing relations with the UAE, Bahrain, Sudan and Morocco through the Abraham Accords.

The 2002 Arab Peace Initiative, sponsored by our new unofficial friend Saudi Arabia, could provide a sound basis for reshaping the face of the region in a manner that serves Israel’s national security.

An iron principle guides Israel’s foreign and defense policies: initiative conveys power and foresight, even if the path is rough. Initiative preserves room for maneuver and favorable public opinion at home and abroad.

Momentum does not mean naïveté, but rather a sober understanding of what can be expected of a state such as Israel. This translates into the launch of a diplomatic dialogue on all levels between Israel and the Palestinian Authority.

The prolonged absence of such a dialogue, and the deeply rooted narrative according to which Israel does not have a partner for dialogue, have generated a deep and understandable feeling of mistrust among Israelis.

A change of atmosphere, the conduct of meetings and dialogues will ease this skepticism and boost trust. And who knows, it might even lead to agreements and concessions. The success of such a diplomatic process with the Palestinians is hardly guaranteed, but it is vital. The “Guardian of the Walls” operation proved yet again that the Palestinian issue is alive and kicking.

The Foreign Ministry is a professional organization tasked with the conduct of Israel’s foreign relations. Diplomacy is a distinct profession, and diplomats are the unchallenged experts in dealing with the region and the international arena. Their voice must be heard, even ahead of the defense agencies’ voice.

This principle has been eroded greatly in recent years, despite its crucial importance for Israel, given the unique and complex challenges it faces. Bolstering diplomacy and foreign policy must also be translated into budgetary allocations. We are talking about negligible sums, not to mention almost ridiculous, out of the state budget.

Adopting these principles will bolster Israel’s standing and position far more than the many entities engaged in “Hasbara”, mostly without any coordination.