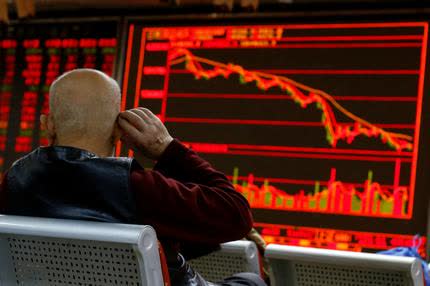 TOKYO (Reuters) – Asian stocks dropped on Monday as investors mulled the implications of a surprise hawkish shift last week by the U.S. Federal Reserve, while the Treasury yield curve flattened further with 30-year yields dropping below 2%.

FILE PHOTO: An investor sits in front of a board showing stock information at a brokerage office in Beijing, China, December 7, 2018. REUTERS/Thomas Peter/File Photo

Japan’s Nikkei led declines with a 3.3% drop and dipped below 28,000 for the first time in a month, while MSCI’s broadest index of Asia-Pacific shares outside Japan fell 1% in early trading.

The yield curve – measured by the spread between two- and 30-year yields – was the flattest since early February.

The U.S. dollar hovered near the 10-week high touched on Friday versus major peers, following its biggest weekly advance in more than a year.

“The story of last week was arguably the one-way move in the USD, which morphed into a clear de-grossing through equity markets, with the ‘value’ parts of the market really getting clobbered,” Chris Weston, the head of research at Pepperstone Markets Ltd, a foreign exchange broker based in Melbourne, wrote in a client note.

“It feels that the pain trade is for further strength in the USD, higher real rates, and a flatter Treasury curve, with the market continuing to see the reflation trades unwound.”

Shares of banks, energy firms and other companies that tend to be sensitive to the economy’s fluctuations have fallen sharply following the Fed’s meeting on Wednesday, when the central bank caught investors off guard by anticipating two quarter-percentage-point rate increases in 2023 amid a recent surge in inflation.

St. Louis Fed President James Bullard further fuelled the sell-off on Friday by saying the shift toward faster policy tightening was a “natural” response to economic growth and particularly inflation moving quicker than expected as the country reopens from the coronavirus pandemic.

Several Fed officials have speaking duties this week, including Chair Jerome Powell, who testifies before Congress on Tuesday.

The MSCI world equity index, which tracks shares in 45 nations, fell another 0.2% on Monday, extending its retreat from a record intraday high reached Tuesday.

In commodities, gold rebounded 0.6% to $1,773.12 an ounce on Monday, looking to snap a six-day losing streak, but still remained near the lowest since early May, pressured by a stronger dollar.