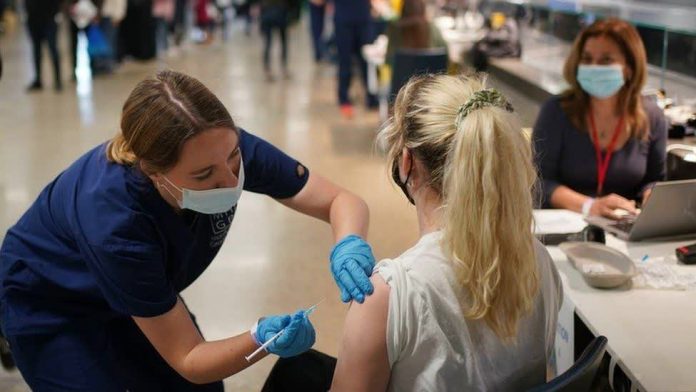 image captionRosi Stamp, 25, was one of those who received their Pfizer jab at Tottenham Hotspur’s stadium on Sunday

The government must start planning for the autumn booster jab rollout now, doctors and NHS trusts have said – as it will involve bigger challenges.

The doctors said there were many questions that need answering, including how long immunity from the original coronavirus jab lasts, and whether children will be vaccinated.

“We cannot just carry on as we are, with an emergency response,” they said.

The government said it was planning for a booster programme later this year.

But it said final decisions on what the rollout would be like depended on the data from ongoing trials.

People have been rushing to get their vaccines in recent days, with more than one million jabs booked on Friday and Saturday in England after vaccinations opened to all over-18s.

Ministers have repeatedly said that vaccination is the way out of lockdown, and the delay to England’s lockdown ending from 21 June until 19 July was partly to allow more people to get vaccinated.

Some restrictions have been eased, though, on the day that had been dubbed Freedom Day – the original date for lockdown ending.

The number of guests at a wedding is no longer limited to 30 (although there are capacity rules depending on a venue’s size), visiting arrangements for care homes are changing, children can go on overnight trips in groups of 30, and pilots of large events like Euro 2020 games will continue.

And in Wales, rules are also being lifted slightly, including Covid capacity restrictions for music and comedy and the limits on weddings changing in line with a venue’s size.

However, the average number of daily confirmed cases of coronavirus is now rising in the UK, with a further 9,284 announced by the government on Sunday. A further six deaths were announced.

On Monday, Chris Hopson, the head of NHS Providers, which represents NHS hospitals and trusts in England, and Royal College of GPs chairman Martin Marshall said the 19 July target to offer a first dose to all adults was “not so much a finishing line as a staging post”.

The government has previously promised there will be a booster programme for the Covid jab – but the health leaders said the prospect of a yearly Covid vaccine would bring “arguably greater challenges”, and it was important to know:

They also said combining the Covid and flu vaccine rollouts – for example a Covid jab in one arm and a flu jab in the other – needed to be explored, but that would make the rollout more complex.

And they said there needed to be investment in proper vaccination venues rather than relying on sports stadiums or community facilities.

“Since flu jabs start in September we need ministers and the JCVI – the Joint Committee on Vaccination and Immunisation – to really answer those questions as quickly as possible, so we’re ready to administer the jabs we need to in the autumn,” Mr Hopson told the BBC.

“We need to recognise that what comes next is going to be really quite challenging.”

Mr Hopson and Mr Marshall said there needed to be a sustainable approach to vaccination, which meant the NHS could carry on vaccinating while also doing its other work.

“We cannot just carry on as we are, with an emergency response largely delivered by an overstretched workforce,” they said – and “the window for planning is limited”.

A Department of Health spokesman said final decisions on the booster programme would partly depend on the data from ongoing clinical trials such as the UK’s Cov-Boost trial.

That trial is testing third doses across England. The first results are expected in September and will help the JCVI take decisions on the booster programme.

The World Health Organization has previously urged rich countries like the UK to donate doses to poorer countries before organising booster jabs. The UK has promised to donate 100 million doses in the next year, although the WHO has called for wealthy countries to give more and give them faster.

Meanwhile, Margaret Keenan, the 91-year-old who became a household name when she became the first person in the world to get the Pfizer/BioNTech jab last December, has spoken to the BBC about her fame, saying “I take it all with a pinch of salt”.

She revealed that she has stayed in contact with the nurse who administered the first jab, May Parsons, and the two have become good friends.

“It did feel very important at the time,” she said, of getting the jab, and acknowledged that her vaccination gave many people around the world hope.