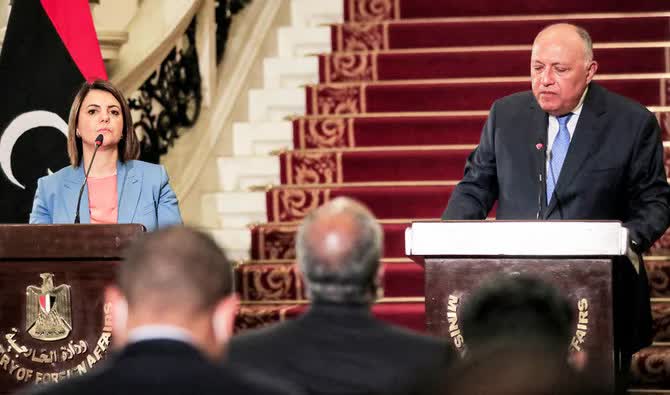 Egypt’s Foreign Minister Sameh Shoukri (R) and his Libyan counterpart Najla al-Mangoush (L) give a joint press conference after their meeting in the capital Cairo on June 19, 2021. (AFP)

CAIRO: Egypt’s Foreign Minister Sameh Shoukry has called for the exit of foreign mercenaries from Libya without delay, during a joint press conference with his Libyan counterpart Najla Mangoush.
Shoukry affirmed Cairo’s support for the Libyan Presidential Council during its transitional period to restore security and stability in Libya until the elections on Dec. 24.
He reaffirmed Egypt’s support for the Libyan interim executive authority, noting that he discussed with Mangoush the efforts to restore security and stability in Libya, and advancing relations between the two countries.
Shoukry said that the talks with his Libyan counterpart included discussions about preparations for the Berlin ministerial conference, which will be hosted by Germany on June 23.

Egypt’s foreign minister reaffirmed Cairo’s support for the Libyan interim executive authority, noting that he discussed with his counterpart the efforts to restore security and stability in Libya, and advancing relations between the two countries.

The meeting will discuss the Libyan crisis. The two ministers also discussed preparations for a new set of Libyan peace talks in Berlin.
The Egyptian foreign minister said that through this conference, both sides would seek the renewal of the commitment of the international community inside and outside of Libya.
He said that his and Magnoush’s renewed emphasis was on advancing joint cooperation frameworks aimed at ending foreign interference and preserving the capabilities of the Libyan people.
Meanwhile, his Libyan counterpart said: “We need Egypt’s support in the political process, to achieve stability and a cease-fire in Libya.”
Magnoush added that there were signs of hope for the unification of Libyans after the conference in Berlin.