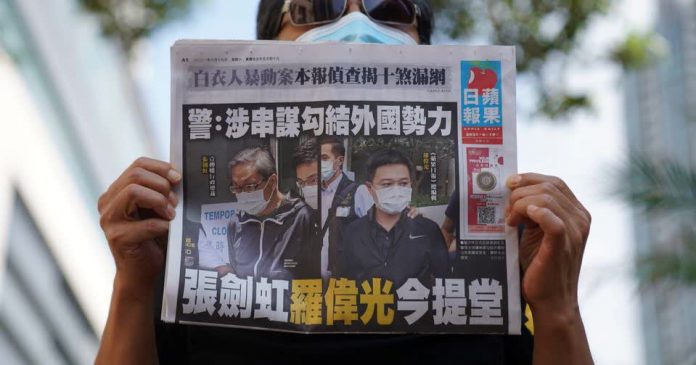 HONG KONG, June 21 (Reuters) – Hong Kong pro-democracy newspaper Apple Daily will be forced to shut “in a matter of days” after authorities froze the company’s assets under a sweeping national security law, an adviser to jailed tycoon Jimmy Lai told Reuters on Monday.

Mark Simon, speaking by phone from the United States, said Next Digital (0282.HK), publisher of the popular Hong Kong newspaper, will hold a board meeting on Monday to discuss how to move forward.

“We thought we’d be able to make it to the end of the month,” Simon said. “It’s just getting harder and harder. It’s essentially a matter of days.”

His comments signal the closure is imminent even after Apple Daily said on Sunday the freezing of its assets had left the newspaper with cash for “a few weeks” for normal operations.”

The news comes two days after chief editor Ryan Law, 47, and chief executive Cheung Kim-hung, 59, were denied bail after being charged with collusion with a foreign country.

Three other executives were also arrested last Thursday when 500 police officers raided the newspaper’s offices in a case that has drawn condemnation from Western nations, global rights groups and the chief U.N. spokesperson for human rights.

The three have been released on bail.

“Vendors tried to put money into our accounts and were rejected. We can’t bank. Some vendors tried to do that as a favour. We just wanted to find out and it was rejected,” he said.

The newspaper has come under increasing pressure since owner and staunch Beijing critic Jimmy Lai, who is now in jail, was arrested under the national security law last August and has since had some of his assets frozen.

Three companies related to Apple Daily are also being prosecuted for collusion with a foreign country and authorities have frozen HK$18 million ($2.3 million) of their assets.