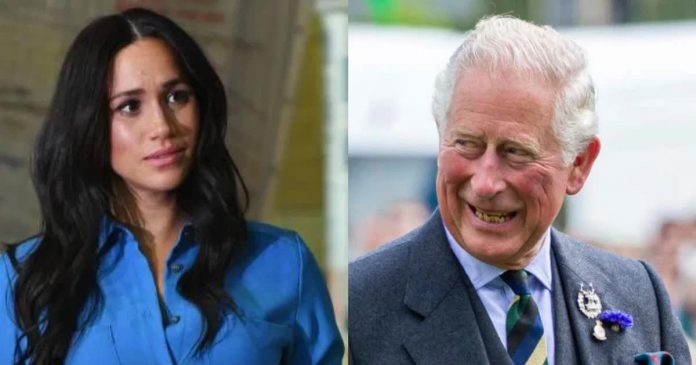 Prince Charles is determined that Meghan Markle and Harry’s son, Archie Harrison Mountbatten-Windsor, will never achieve the title of prince, according to the Daily Star.

Traditionally, the grandchildren of the British monarch are all granted the titles of prince and princess.

But Prince Charles has a vision of a “slimmed-down” monarchy, one that would have a streamlined, smaller set of senior royals that only includes those directly in line for the British throne and their children and spouses. This would exclude Harry and Meghan Markle’s firstborn child, Archie.

A source close to Prince Charles has reported that the future king has a plan to alter legal documents to ensure that Meghan Markle and Harry’s son, Archie, will never become a prince.

The source told the Mail on Sunday: ““Harry and Meghan were told Archie would never be a Prince, even when Charles became King.”

A considerable amount of money is at stake, because senior royals receive an avalanche of cash to support their lavish lifestyles from the Sovereign Grant.

As a Prince, Archie would also be eligible for taxpayer-funded police protection — a fact that Meghan Markle told Oprah Winfrey in March was particularly important to her.

Should Prince Charles slap Meghan Markle in the face and exclude Archie from becoming a Prince, he would also have to snatch the titles from the daughters of Prince Andrew and Sarah, Duchess of York — Princesses Eugenie and Beatrice.

The Daily Mail reports that Meghan Markle and Prince Harry are infuriated by Prince Charles’ desire to exclude Archie from ever receiving a royal title, and that this rage has been behind their recent efforts to trash the House of Windsor in the press.

The decision, which follows months of fraught discussion behind the scenes, has plunged relations between Harry and his relatives to a dangerous new low.

A source told the Daily Mail, “Harry and Meghan were told Archie would never be a Prince, even when Charles became King.”

This news about Archie’s future place in the royal family — or lack thereof — comes as a new book by royal biographer Robert Lacey, Battle of Brothers, reports that Prince Harry has demanded the right to approve at least one of the reporters covering the unveiling of the Princess Diana statue in London on July 1. The duke is said to have plans to travel alone to the UK for the event, leaving Meghan Markle behind in California with their newborn daughter, Lilibet Diana Mountbatten-Windsor.

Meanwhile, Charles and his younger brother Prince Andrew have long battled over whether Eugenie and Beatrice will receive police protection.

But The Sun reports that as far as Prince Charles is concerned, the public is fed up with bankrolling so many members of the royal family. So Meghan Markle and Harry can come up with their own cash to finance Archie’s existence.

The Queen issued a new Letters Patent that went into effect in 2013 that gave titles to William and Kate Middleton’s younger children, Princess Charlotte and Prince Louis, as well.

“Charles has never made any secret of the fact that he wants a slimmed-down Monarchy when he becomes King,” an insider said of the Prince of Wales expected efforts to infuriate Meghan Markle and deny Archie a title. “He realises that the public don’t want to pay for a huge Monarchy and, as he said, the balcony at Buckingham Palace would probably collapse.”

The Mirror reports that when Archie was born, he could have been granted the title of the Earl of Dumbarton. But Meghan Markle and Harry are said to have been holding out for a much more choice title once Prince Charles becomes king.

It comes after a rocky few months for the royal family after Prince Philip died and the fallout over Meghan and Harry’s interview with Oprah Winfrey.