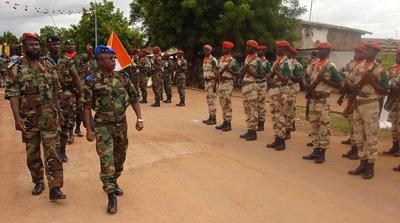 By William Assanvo* Several attacks in Côte d’Ivoire along the border with Burkina Faso claimed the lives of six Ivorian soldiers in the past three months. Five others were injured. These incidents have heightened fears of violent extremism spreading in the country. Ivorian authorities attribute the assaults to a group linked to Katiba Macina, affiliated with the Jamâ’ah Nusrah al-Islâm wal-Muslimîn (Group for the Support of Islam and Muslims). On the night of 7 June, armed fighters attacked the town of Tougbo (see map). A month earlier, Bolé was stormed, with attackers accusing residents of being informants for the Ivorian security forces. In March, armed forces in Kafolo and a gendarmerie post in Kolobougou were targeted. On 1 April, a vehicle struck an improvised explosive device on the road between Nassian and Kafolo. This is the first time such an incident has been reported in the country. On 12 April, a liaison vehicle of the national gendarmerie was similarly attacked on the same road. These incidents aren’t exhaustive and probably reflect the worst manifestations of the threat. And although the number of attacks to date is relatively small, it shows extremist groups’ intention and ability to target Côte d’Ivoire. The country needs to prepare for sporadic attacks on its defence and security forces and reprisals against civilians suspected of collaborating with them. Communities who resist extremist groups’ efforts to embed among the locals will likely also be targeted. The threat of violent extremism to Côte d’Ivoire is perceived mainly as external. Attacks are believed to be perpetrated by individuals from Burkina Faso, who take advantage of the border’s porosity. However, several incidents have occurred far from the border, suggesting that individuals linked to extremist groups are present in Ivorian territory. Although people from neighbouring countries are suspected of providing the groups with information, logistics and financial resources, they are well integrated into the socio-economic fabric of Ivorian communities. The government of Côte d’Ivoire should avoid the mistake made by other countries in the region of seeing the threat only as an external problem. Violent extremism is usually a result of both external and domestic dynamics. Extremists exploit vulnerabilities such as local conflicts, governance deficits, security gaps and illicit activities to become integrated into communities, recruit members and raise funds. Northern Côte d’Ivoire is not exempt from such weaknesses. Extremists take advantage of recurring conflicts between herders and farmers over access to grazing land and water, and tensions over crop destruction by livestock. The resentment felt by ex-fighters who believe they never benefited from reintegration programs is also exploited. Extremists take advantage of the difficult conditions under which border communities live. They recruit with promises of financial and material reward, and promote illegal hunting or gold mining with the offer of protection services in return for support. To stop extremists from deepening their roots in Côte d’Ivoire, cohesion within and between communities needs to be strengthened. Conflict resolution mechanisms should be reinforced, whether through local chiefs, the gendarmerie or the justice system. And relations between communities and government officials must improve. Attacks shouldn’t be the sole measure of the violent extremist threat. Côte d’Ivoire could, for example, become a supply source for extremists – in terms of financing, operations and members. Strategies would then be needed that disrupt the group’s supply chain and deprive them of these resources. Already illegal artisanal gold mining, cattle rustling, smuggling stolen motorcycles and rural banditry (highway robbery) in the country’s north deserve special government attention. Success here would stifle extremist groups’ ability to further their aims. Ivorian authorities acknowledge the terror threat, and several measures have been taken over the past six years, particularly from a security perspective. More soldiers were deployed in the north after the first attack recorded in Kafolo in June 2020. In April, ‘cross-border terrorism’ was one of the priorities discussed as part of the government’s 2021 work plan. It remains to be seen how this will translate in practice. Côte d’Ivoire’s ability to contain the spread of violent extremism will depend on Burkina Faso and Mali’s actions in their respective border areas. Better cooperation on security and border management with these countries and with Ghana will be instrumental in containing the threat. Ivorian authorities also need to earn the trust and respect of their border communities, many of whom feel neglected. People in these borderlands endure poor living conditions and lack health and education services, economic opportunities and security. Improving living conditions will reaffirm the state’s relevance and authority. Locals must also be involved in finding ways to contain the threat of violent extremism. The government needs to appreciate the risk communities face of being caught between the actions of security forces on the one hand and extremists on the other. It is not inevitable that Côte d’Ivoire will follow the same trajectory as other countries in the region such as Burkina Faso, but the risk shouldn’t be underestimated. *About the author: William Assanvo, Senior Researcher, Regional Office for West Africa, the Sahel and the Lake Chad Basin, ISS Abidjan Source: This article was published by ISS Today and produced with support from the UK Conflict, Stability and Security Fund and the Open Society Initiative for West Africa (OSIWA). ISS The Institute for Security Studies (ISS) partners to build knowledge and skills that secure Africa’s future. Our goal is to enhance human security as a means to achieve sustainable peace and prosperity. The ISS is an African non-profit organisation with offices in South Africa, Kenya, Ethiopia and Senegal.