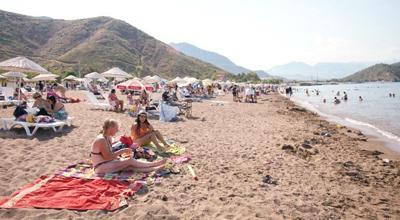 With the resumption of full-scale air traffic between Turkey and Russia, tourism professionals now expect around 1 million Russian tourists to flock to Turkish resorts starting from July.

“I think we can receive nearly 1 million bookings from Russia in the upcoming period,” said Ali Kızıldağ, general manager of Calista, a luxury hotel in the Mediterranean province of Antalya’s Belek resort town.
The hotel was among a couple of tourism facilities inspected by a Russian delegation recently.

“The members of the delegation observed the [health safety] system we have set up in Antalya. We have been involved in this system for the second year. We are being inspected by the tourism, health and interior ministries five days a week. Our system is so detailed that we cannot show every aspect of it in 10 days. We knew that the system is working well, and we showed it to them,” Kızıldağ said.

Russia will resume full-scale air traffic with Turkey as of tomorrow.

The decision was made following a visit of Russian experts to Turkey to assess safety measures, Deputy Prime Minister Tatyana Golikova said in a government meeting in Moscow on June 18.

“Russia’s resumption of flights to our country as of June 22 is an indication of the trust in our country for safe tourism,” Ersoy wrote.

“I hope that we will reap the fruits of our diplomatic traffic with other countries in the upcoming period, as with Russia,” he added.

Turkey has spearheaded safe tourism campaigns and a special certification to ensure that tourists and locals alike are safe from further coronavirus outbreaks.

In a decision announced on April 12, Russia restricted flights to Turkey until June 1 due to rising coronavirus cases.

Authorities in Moscow extended the ban until June 21 despite the fact that daily coronavirus cases in Turkey declined nearly 90 percent from the peak level of 61,000 in mid-April.

“Russia was expected to announce this decision before June 21. It was a fast process,” said Erkan Yağcı, the head of the Mediterranean Touristic Hoteliers’ Association (AKTOB) and board member of the Tourism Promotion and Development Agency (TGA).

Manavgat-Side Hoteliers Association (MASTOB) head Cengiz Haydar Barut said that they predicted the positive decision of Russians because the hygiene standards at their facilities were far higher than two years ago.

“Our new targets are the Scandinavian, Dutch, Belgian and British markets. Observer delegations from those countries are welcome to see our health safety system,” he said.

Rixos Hotels chairperson Fettah Tamince said: “With advantages such as the safe tourism measures, the given vaccination priority to tourism professionals and the high rate of vaccinated people, Turkey is a rising star in world tourism.”