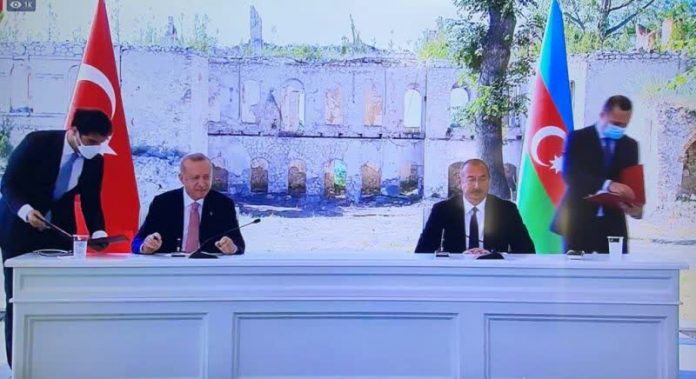 https://www.turan.az-The Presidents of Azerbaijan and Turkey signed the Shusha Declaration About Alliance between the two countries in Shusha on June 15. The signed document refers to the Treaty of Kars. The document covers all aspects of bilateral relations, in particular, the defense industry and mutual military assistance.In his speech, Ilham Aliyev called the day a historic day. The President said that one of the key points in the document is the paragraphs regarding the opening of the Zangazur corridor, which is reflected in the signed document and shows the importance attached to this issue.Turkish President Recep Tayyip Erdoğan said that we called on Armenia to participate in regional development within the framework of the platform of six countries with the participation of Turkey, Azerbaijan, Russia, Iran, Georgia, and Armenia.What is the essence of this declaration? What will the Shusha Declaration give to Azerbaijan?Elman Fattah, an expert on international affairs, answered ASTNA’s questions.

Question: Elman bey, what is the essence of the Shusha Declaration signed by the Presidents of Azerbaijan and Turkey? What will this declaration give to Azerbaijan, Turkey, and the region?

Answer: The essence of the Shusha Declaration is to document the significantly deepened Turkish-Azerbaijani relations in the military, political, economic, and cultural spheres. So far, a number of declarative documents have been signed between Turkey and Azerbaijan; however, from a practical point of view, relations have lagged behind the level indicated in the documents. Over the past year, these relations have deepened rapidly and exceeded the agreements signed between the two countries. The Shusha Declaration reaffirmed the issues in the existing bilateral agreements, formalized the more developed relations and deeper cooperation in the future.

Russia left the eastern part of Turkey, except for Batumi, and Turkey (in particular, Grand National Assembly of Turkey (TBMM)) accepted the transfer of Batumi to Georgia, recognizing the right of an autonomous region.

The terms of the Treaty of Moscow necessitated the signing of the Treaty of Kars between the three Caucasus republics and Turkey in the autumn of the same year in terms of clarifying Turkey’s borders in the Caucasus, clarifying Turkey’s interests in relation to the peoples (of Turkish origin) living there, as well as Turkey’s military-political relations with the newly-Sovietized Azerbaijan, Georgia, and Armenia.

The terms of the treaty include granting Nakhchivan the status of autonomy within Azerbaijan, protecting the rights of ethnic groups (Turks, Georgians, Armenians) living in the territories of the signatory states, and so on.

The main reason why we see references to the Treaty of Kars in important documents signed between Turkey and Azerbaijan today is Armenia’s refusal to recognize this treaty after the collapse of the USSR. Armenia continues to claim land in the eastern provinces of Turkey under the Treaty of Sèvres signed by the Ottomans and expired as a result of the War of Independence and does not recognize the Treaty of Kars.

The second reason is the obligations of the ethnic groups in the treaty. According to the treaty, the signatory countries had to recognize the rights of ethnic groups living in their territories. In fact, Armenia has already expelled or killed all the Turks living in its territory. Declaring its commitment to the treaty, Azerbaijan demonstrates that it will not pursue any discriminatory policies against ethnic Armenians in the Nagorno-Karabakh region, which is still out of its control.

Question: There are many documents on the strategic partnership between Azerbaijan and Turkey. During the presidency of Ayaz Mutallibov, Abulfaz Elchibey, Heydar Aliyev, and Ilham Aliyev, documents on strategic cooperation were signed with Turkey. The most important is the Agreement on Strategic Partnership and Mutual Support between Azerbaijan and Turkey, adopted by the Azerbaijani parliament on December 21, 2010. The document envisages deepening cooperation between the two countries in important areas. The agreement consists of 23 articles and 5 sections: Military-political issues and security issues; Military issues and military-technical cooperation issues; Economic cooperation issues; Humanitarian affairs; and General and final provisions.

According to the declaration, Baku and Ankara intend to help each other if one of the parties is subjected to an armed attack or aggression. The parties will also cooperate to eliminate threats and challenges to national security. Do you think that the signing of a new declaration in the presence of such documents can be considered as a message to the forces seeking revenge?

Answer: I do not think that the declaration is a response to any revanchism. This declaration, as I mentioned earlier, is a re-emphasis on the issues in the existing documents, along with the written form of the relationship, which is much more developed than envisaged in the documents.

On the other hand, if the Turkish president, who played an exceptional role in the liberation of Shusha and in the overall military success of the 44-day war, visited Shusha, at least a protocol document should have been signed. Such a document was a declaration formalizing past, present, and future relations.

As for the message, Ilham Aliyev takes revenge on Pashinyan in every action on Shusha. This time, he sent a message to Armenia not only with the declaration he signed but also with his dance on the Jidir Plain.

Question: Why was this document signed on June 15? What is the symbolism or significance of this history? Before this date, international processes were taking place. Could the date of signing this document, June 15, be related to this?

Answer: It was known months ago that Erdoğan would visit Shusha and the document would be signed there. In other words, the declaration has nothing to do with the NATO summit that Erdoğan attended before visiting Shusha. It is not accidental that it was signed on June 15. June 15 is the anniversary of the revenge of authoritarianism in Azerbaijan in the person of Heydar Aliyev. It was possible to predict that his son Ilham Aliyev would postpone Erdoğan’s visit to Shusha on that day. In general, the international authoritarian coalition has been growing in the Caucasus for the past year. From this point of view, June 15 is a more sacred date for Ilham Aliyev than ever.

Question: Does the Shusha Declaration have any international legal and political force?

Answer: Under the 1969 and 1986 conventions, states have the right to conclude bilateral or multilateral agreements. The intergovernmental declaration signed between Turkey and Azerbaijan in Shusha is also an international agreement. As for the legal force, under international law, any treaty signed by a state has a presumption of validity. To claim otherwise, it is necessary to prove that the declaration contradicts the norms of international law. In this regard, the international legal force of the document is unquestionable. If we look at the classification, it is an international agreement in terms of structure, bilateral in terms of participation, and political in terms of content. That is, considering the issues not provided for in the Shusha Declaration, we can assume that in the future, Turkey and Azerbaijan should sign bilateral or multilateral (Armenia, Russia) agreements on special issues related to the regulation of the Zangazur corridor.

Question: Elman bey, as you know, Turkey is a NATO country. Azerbaijan is not a member of NATO. In this case, according to the document, can Turkey use its military force against any provocation against Azerbaijan? How will NATO or NATO countries react to this?

Answer: The relations of NATO member states are decisively regulated by Article 5 of the NATO Treaty. The general content is that if there is any occupation in North America and Europe, in the polar circle defined by the treaty, including in Turkey, it is a declaration of war against all member states.

In addition, Article 8 stipulates that member states must not enter into an agreement with other states that violates NATO’s obligations. The Shusha Declaration does not contradict Turkey’s NATO commitments in any way.

A controversial issue in Turkey’s relations with NATO is Turkey’s agreement with Russia on the S-400 anti-aircraft missile system. Issues beyond the scope of these two articles, Turkey’s voluntary conclusion of non-aligned alliance agreements with other countries against NATO members, or Turkey’s conduct of military operations outside its borders with its own power are Turkey’s sovereign right. That is, whenever Turkey uses its military power for the benefit of Azerbaijan has nothing to do with its membership obligations to NATO. If such an event occurs, the attitude of NATO countries will be political in nature. Whether in the direction of support or protest.

Question: Many experts and politicians, impressed by the rapprochement between Azerbaijan and Turkey, propose the unification of the two countries. Do you think this proposal makes sense?

Answer: Such proposals are at least 100 years old. During the founding of the republic, Mahammad Amin Rasulzade wrote articles about the inviolability of Azerbaijan’s sovereignty in response to Ottomanist populists. Oppositionists, who accidentally became politicians after leaving the USSR, also re-circulated the proposal for the joining of Azerbaijan and Turkey in each period of emotional rapprochement between the two countries.

And now they have drawn “marriage” results from the Shusha Declaration. They do not understand that one day they declared themselves mujahids for independence, and the next day they made such a proposal, admitting that the independence of Azerbaijan did not mean anything to them. The development of Azerbaijani-Turkish relations, the deeper alliance between the two countries should serve not to lose Azerbaijan’s independence, but to strengthen it.

Question: After the signing of the declaration, the presidents spoke about regional development and the Zangazur corridor within the framework of the platform of six countries with the participation of Turkey, Azerbaijan, Russia, Iran, Georgia, and Armenia. Do you think this six-party platform and corridor will take place? How do you see this process and cooperation?

Answer: It is a logical proposal. If a new system of relations is formed in the region, after a while, it will be necessary for the interested countries to come together on some platform.

On the other hand, the continuing chaotic nature of the traditional system of international relations drives regional power centers to access different platforms on more than one level. Turkey’s multilateral foreign policy concept in recent years also stems from the conditions of this chaotic period. If Turkey is located in the Caucasus via Azerbaijan, then it will be primarily interested in normalizing relations with Armenia.

If the Azerbaijani-Armenian-Turkish relations normalize, it will not happen against the will of Russia. If the Turkish-Russian talks on normalization continue successfully, the platform will become a reality with the opening of the Zangazur corridor, a regional platform with the participation of Georgia and Iran, and a key center for sustainable peace and economic development in the Trans-Caucasus region.

These are the positive results of the proposal. The negative results are the danger that the proposed six-party platform will turn the Caucasus into a bridgehead for the international authoritarian coalition.