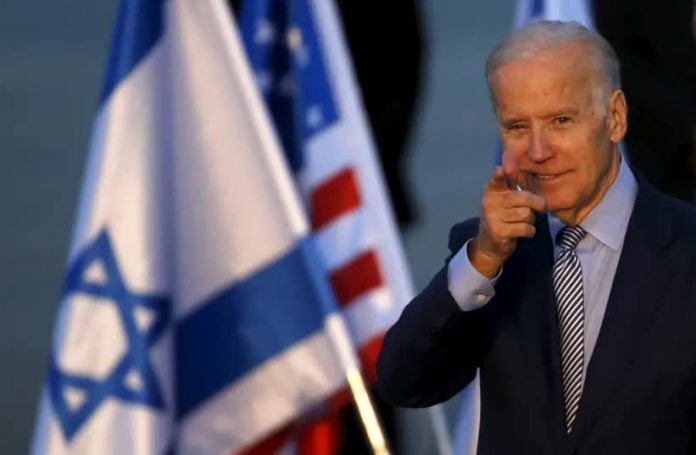 Washington needs to be smart and sensitive to what it demands from Israel, lest steps it takes leads to this government’s downfall.

US President Joe Biden gestures after disembarking from a plane upon landing at Ben Gurion International Airport in Lod, near Tel Aviv, Israel March 8, 2016

The only way the current Bennett-Lapid government can last – a government that includes Meretz and Labor on the Left, Yamina and New Hope on the Right, and Ra’am (United Arab List) – is for the parties to put their ideologies in their pockets.

At least temporarily. At least for the duration of this government’s life.

That means, for instance, that Meretz is going to have to stop pushing an anti-settlement agenda, and Yamina must not push a pro-settlement one. In that context, Meretz MK Mossi Raz’s cosponsorship of a

conference in the Knesset on Tuesday discussing Israel as an “apartheid state” is the type of stunt that will shorten the life of this government.

As both Prime Minister Naftali Bennett and Foreign Minister Yair Lapid realize, the only way for this government to survive is to push aside those issues and concentrate on the ones that the Right, Left and Ra’am can rally around – issues such as the coronavirus.

But it is not only up to the coalition to focus on consensus issues and try as much as it can to minimize the bandwidth taken up by the ideological ones; it is not only up to the heads of Meretz and Yamina to realize that now is not the time to run full force with their ideological agendas; it is also incumbent upon the US administration to be sensitive to Israel’s delicate political moment and find ways to avoid pushing issues that will lead to the types of ideological clashes inside the government that could bring it down.

After 12 years of a right-wing government led by then-prime minister Benjamin Netanyahu, a tenure that witnessed unprecedented friction with a Democratic president (Barack Obama) and the Democratic Party, conventional wisdom holds that the US President Joe Biden’s current Democratic administration is pleased to be working with a different team in Jerusalem, and that it probably is not eager for Netanyahu’s return.

As such, Washington needs to be smart and sensitive to what it demands from Israel, lest steps it takes lead to this government’s downfall.

Take the settlement issue, for instance. Given the composition of the current coalition, it is unlikely that the government is going to initiate major building projects in the settlements: Meretz, Labor and Ra’am would all fervently oppose.

But it is also unlikely that this government is going to freeze all construction either, something that Yamina, New Hope and Yisrael Beytenu would oppose. From time to time, therefore, there are likely to be stories about new projects in settlements inside the main settlement blocs, or in neighborhoods in Jerusalem beyond the Green Line.

But whereas the Obama administration, and even the Bush administration before it, would protest loudly and publicly new projects in Jerusalem neighborhoods such as Gilo or Neveh Ya’acov, let alone in Gush Etzion or Ariel, this administration – if it wants to see this government last for more than just a few months, would be wise not to make major issues out of those types of projects, or at least not doing it publicly, to avoid creating a coalition crisis over the matter.

Another issue that is likely to cause disquiet inside the coalition is the US intention to reopen its consulate in Jerusalem to deal with Palestinian issues, an office that before it was closed by former ambassador David Friedman and folded into the US Embassy, was viewed as an unofficial embassy to the Palestinians.

If Washington asks Israel for permission to reopen the consulate, it is an issue likely to split the government, with those on the Right against, and those on the Left in favor.

While it is difficult to imagine that this would lead to a collapse of the coalition – the parties at this early stage will likely find a way to overcome this hurdle, just as they are likely to find a way to jump over the family reunification law hurdle that has been tossed in its way – it would force to the top of the agenda issues that, if the government is to survive, would better be left alone. The administration, if it has an interest in this government’s survival, would do well to prioritize what is worth pursuing, and leave alone those issues that could trigger an Israeli coalition crisis.

Some may argue that the US needs to pursue its own interests without worrying about how this will play out on the Israeli domestic political scene, but that’s a rather naïve view since the domestic Israeli political scene does have an impact on America’s abilities to push forward its own policies in the region.

For instance, opposition leader Netanyahu is waiting impatiently in the wings ready to pounce and paint this government as weak and unable to withstand US pressure and stand firm on Israel’s security interests.

Netanyahu already did that by alleging Monday that Lapid had forfeited Israel’s freedom of action against Iran by agreeing to a “no-surprises” policy with the new administration. If he pounced on a nonissue – because this policy has long been an aspirational hallmark of Israel-US relations – think how much noise he will make if the government acquiesces to a consulate in east Jerusalem or backs down on the settlement issue.

AND THEN there is Iran. Barring any unforeseen developments, the US appears now on track to rejoin the Iranian nuclear deal that former president Donald Trump walked away from.

IDF Chief of Staff Lt.-Gen. Aviv Kohavi is presently in the US, where this is one of the main issues he is discussing. President Reuven Rivlin will meet Biden next week in Washington, where the issue will also be raised, and chances are good that Bennett may be invited to Washington before the US formally rejoins the deal.

It is obvious that Biden and top US officials do not need to meet Israel’s leadership just to hear again how and why Israel is opposed: Netanyahu has made that eminently clear for the last number of months.

What they can do, however, is come to an agreement with the US on a plan of action that will be taken if Iran violates the terms of the agreement; come to a mutual agreement on how to combat Iran’s nonnuclear malign behavior in the region; or even agree to how Israel’s military capabilities can be enhanced in light of the new deal.

Here, too, if the Americans are keen on seeing this government last, it needs to take into account Israel’s fragile political moment and act accordingly, realizing that Netanyahu is just waiting for something he can use to paint Bennett and Lapid as soft on security, to undermine and quickly break up this coalition.