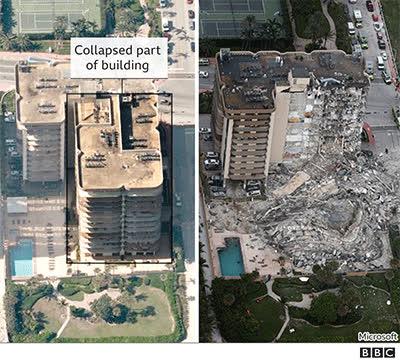 https://www.bbc.com-At least one person has died and 51 others are unaccounted for after the collapse overnight of a 12-storey residential building north of Miami, Florida, officials say.

Rescuers are combing the rubble in the search for survivors and were seen pulling a boy out alive.

It is unclear how many people were in the building at the time.

The complex in the town of Surfside was built in 1980. Out of 130 units, about half were affected by the collapse.

Fifty-one people believed to have been living in the building have not yet been contacted, County Commissioner José Díaz said.

Rescuers pulled 35 people from the wreckage, officials said. Ten were assessed and treated, of whom two were sent to hospital.

“The back of the building, probably a third or more, is totally pancaked,” Surfside Mayor Charles Burkett told a news conference.

Florida Governor Ron DeSantis said he would travel to South Florida later on Thursday. “We are bracing for some bad news just given the destruction that we’re seeing,” he warned, saying he thought the quick response from the emergency services had saved lives.

A community centre in Surfside has been turned into a family reunification centre and an information point for concerned relatives.

Police gave the building’s location as 8777 Collins Avenue, the address of the 12-storey Champlain Towers, which contains more than 100 beachfront apartments and was built in 1981. Surfside runs along Collins Avenue, north of Miami Beach city limits.

Rescuers could be seen using a crane to reach residents in nearby apartments in order to help them evacuate.

One man who was out with his brothers walking their dog described hearing the building come down.

“Basically we heard a really big rumble and we thought it was a motorcycle, you know, and we turned around and saw a cloud of dust just coming our way,” he told CBS Miami.

“We were like – ‘what is going on?’ We went rushing toward it with shirts over our faces and the security guard came out and we were, like, ‘what happened?’ and she said the building collapsed.”

A man who witnessed the aftermath of the collapse told CNN, “It looked like something from 9/11,” referring to the attacks that brought down the Twin Towers in New York in 2001.

Santo Mejil, 50, was woken when his wife called from a unit on the ninth floor of one of the three buildings that make up Champlain Towers. She is an overnight caretaker for an elderly disabled woman.

“She said she heard a big explosion,” Mr Mejil told the Miami Herald. “It felt like an earthquake.” His wife was among those rescued.

A man who lives in a neighbouring building described what happened for CBS: “The building shook and then I looked out the window and you couldn’t see, I thought it was like a storm or something coming in.

“When the dust cleared, the back two-thirds of the building was gone, it was down to the ground.”