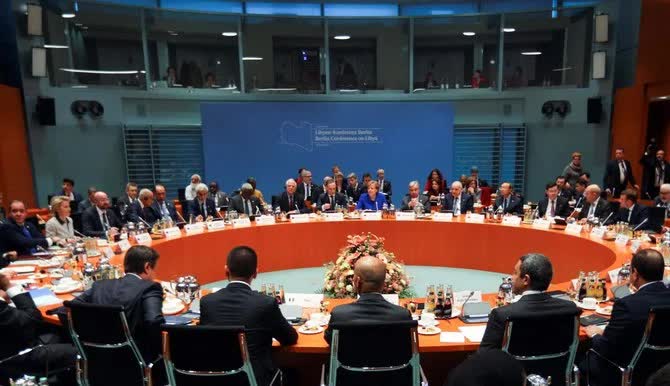 This file photo taken on January 19, 2020 shows a general view of participants attending the Peace summit on Libya at the Chancellery in Berlin. (AFP)

BERLIN: Germany and the United Nations are bringing together representatives of Libya with powers that have interests in the country at a conference Wednesday which aims for progress toward securing elections in the North African nation and the removal of foreign fighters.
The meeting at the foreign ministry in Berlin, with US Secretary of State Antony Blinken among participants, follows up on a January 2020 conference where leaders agreed to respect an arms embargo and to push the country’s warring parties to reach a full cease-fire. Germany has tried to act as an intermediary.
Countries that have been involved in the process include the five permanent members of the UN Security Council, along with Italy, Turkey and the United Arab Emirates.
Ahead of the conference, German Foreign Minister Heiko Maas noted that much has been achieved in the past two years. An October cease-fire agreement that included a demand that all foreign fighters and mercenaries leave Libya within 90 days led to a deal on elections, due to be held on Dec. 24, and a transitional government that took office in February.
But “many challenges still lie ahead of us,” said Maas. “For the further stabilization of the country, it is crucial that elections take place as planned and that foreign fighters and mercenaries really do leave Libya.”
He added that Wednesday’s conference launches a new phase “in which we no longer only talk about Libya, but in which we are now speaking with Libyan men and women about the future of their country.”
Blinken said that “we share the goal of a sovereign, stable, unified, secure Libya free from foreign interference — it’s what the people of Libya deserve, it’s critical to regional security as well.”
“For that to happen, national elections need to go forward in December and that means urgent agreement is needed on constitutional and legal issues that would undergird those elections,” he said at a news conference with Maas. “And the Oct. 23 cease-fire agreement has to be fully implemented, including by withdrawing all foreign forces from Libya.”
The US special envoy for Libya, Richard Norland, said it was important to start bringing all armed groups in the country under a joint military command. “When foreign forces leave, they’re going to need to be replaced by a viable united Libyan national military and police structure,” he said.
Meanwhile, aid group Doctors Without Borders said this week it was suspending its activities in two detention centers in Tripoli after “repeated incidents of violence toward refugees and migrants held there.” It said staff had witnessed guards beating detainees at one center and received reports of people being shot at in another.
Libya has been a key transit country for migrants from Africa trying to reach Europe, especially after the collapse of order when a NATO-backed uprising toppled and later killed longtime dictator Muammar Qaddafi in 2011. The oil-rich country was long divided between a UN-supported government in the capital, Tripoli, and rival authorities based in the country’s east, each backed by armed groups and foreign governments.
In April 2019, eastern-based commander Khalifa Haftar and his forces, backed by Egypt and the United Arab Emirates, launched an offensive to try to capture Tripoli. Haftar’s 14-month campaign collapsed after Turkey stepped up its military support of the UN-backed government with hundreds of troops and thousands of Syrian mercenaries.
Little progress has been made so far on getting foreign forces out of Libya. Jalel Harchaoui, a senior fellow at the Geneva-based Global Initiative Against Transnational Organized Crime who follows Libya closely, said that it is the presence of foreign mercenaries, acting as a sort of deterrent, that has led to the current, if uneasy, peace.
“That’s what it comes down to, and of course it’s not politically correct to say,” he said. He cautioned that elections could deepen polarization if conducted too hastily.