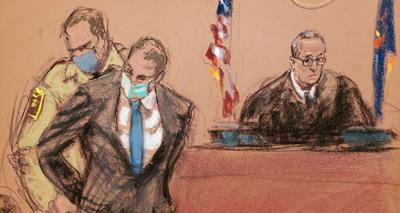 Former Minneapolis police officer Derek Chauvin was found guilty in April of murdering George Floyd, after he kneeled on the man’s neck for over 9 minutes during an arrest in May 2020.

As a Minnesota court is set to announce Derek Chauvin’s sentence on Friday, the former policeman could end up in prison for several decades, legal experts predict.

In April, Chauvin was found guilty of second-degree murder, third-degree murder and second-degree manslaughter for pressing his kneel against George Floyd’s neck for about 9 and half minutes, despite the black man’s pleas for him to stop. The moment was captured on video, eventually spawning a wave of protests and violence across the world under Black Lives Matter slogans. Chauvin’s guilty verdict was cheered by US President Joe Biden as a “giant step forward”.

But as Chauvin’s sentencing is about to be announced, the result may still leave some disappointed.

Legal teams from both sides will make brief arguments on Friday. It’s not expected that Chauvin will speak up in his defence – previously he chose not to. The former officer is also facing a federal trial for violating Floyd’s civil rights and may decide to keep silent in order not to implicate himself in the case.

Floyd’s family can also choose to make statements during the sentencing but none of them have yet expressed a desire to speak.

Out of the three crimes Chauvin is set to be sentenced for, second-degree murder is the most serious, carrying a maximum of 40 years in prison. As all of the charges brought against the ex-cop result from one act, his sentence on each count is expected to be measured concurrently, based on the most serious charge, according to Minnesota statues. Thus, it could not exceed four decades in prison. However, such a lengthy sentence should not be anticipated without a risk of being overturned on appeal, analysts predict.

Meanwhile, Derek Chauvin’s defence attorney Eric Nelson maintains that the officer’s actions were a result of a “broken” system and that the man was just doing his job. The lawyer filed a motion in early June asking to sentence the former policeman to probation, but legal experts believe this outcome is highly unlikely.

According to legal observers cited by the Guardian and AFP, a sentence between 20 and 30 years is something Chauvin should expect to hear from Judge Peter Cahill on Friday. It is believed that the 45-year-old man will appeal any sentence, as he didn’t plead guilty to any of the charges brought against him.

Under Minnesota law, Chauvin still could end up serving only two-thirds of his sentence in prison if it’s deemed that his behaviour is “good”.

Derek Chauvin’s three-week trial grabbed the world’s attention in April, as US authorities braced themselves for a new round of violence in the event of the man being found not guilty. The Minnesota District Court was surrounded by concrete barricades and patrolled by the US National Guard as 12 jury members decided Chauvin’s future.

On 20 April, they came to the conclusion that he had killed George Floyd, despite arguments from the defence that the police officer had acted lawfully and that the man’s death was not directly caused by Chauvin’s actions.

Hennepin County Medical Examiner Dr. Andrew Baker, who performed an autopsy on Floyd’s body in May 2020, concluded that he died from cardiopulmonary arrest that occurred during “law enforcement subdual, restraint, and neck compression” and thus declared his death a “homicide”. Baker, however, argued that he could not find evidence that Floyd died from asphyxiation.

The defence sought to point out the fact that Floyd had a significant amount of fentanyl in his blood and had a preexisting heart condition. This could have undermined the prosecutor’s argument that Chauvin’s actions were a “substantial cause” of Floyd’s death, but juries remained unconvinced.

George Floyd died on 25 May as he was arrested on suspicion of using a counterfeit $20 note at a local grocery store. Despite the man’s controversial history with law enforcement, his death left a huge legacy, prompting worldwide unrest in the name of the fight against police brutality.