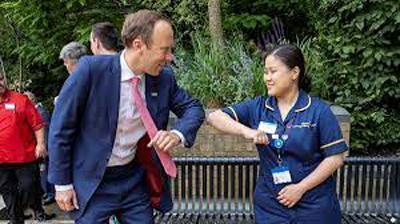 The affair between UK Health Minister Matt Hancock and his aide Gina Coladangelo, both of whom are married with three children, has prompted a flood of commentary and memes online.

Hancock has been mercilessly mocked on social media after CCTV footage of him kissing his aide was leaked. The sarcastic comments posted on Twitter freely referred to Hancock’s professional life where as Health Secretary he was meant to lead the fight against the coronavirus pandemic and has been relentless in telling his fellow countrymen to keep socially distanced from each other.

The phrase “eat out to help out” – initially used by the government to encourage Brits to dine in restaurants to help the hospitality sector – started trending on Twitter on Friday in relation to Hancock.

Health Secretary Matt Hancock and his Aide really did take ‘Eat Out To Help Out’ seriously didn’t they? #matthanock pic.twitter.com/MWwSPvq03m

Well…Matt Hancock brought a whole new meaning to the ‘Eat out to help out’ scheme didn’t he… pic.twitter.com/IUe9g2mvMs

This is #matthanock this morning telling his wife he really did eat out to help out. pic.twitter.com/5W6d9vgcLw

​Others recalled the government campaign to prevent spread of coronavirus indoors – “Hands, Face, Space” – and applied it in a different way to Matt Hancock.

So Hancock really had us clapping hands for NHS while he was clapping cheeks 😂 pic.twitter.com/Z6FCnuYDor

​Hancock responded to the leaked clip by apologising for breaching his social distancing rules which his department has been so eager to enforce, but failed to consider the adultery issue.

Despite the scandal linked to his name, Hancock has received backing from Prime Minister, Boris Johnson who has just married his third wife.