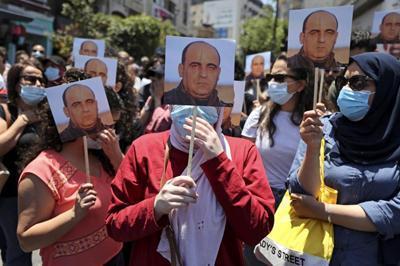 Following what appears to have been the politically driven assassination of Palestinian activist and critic of the Palestinian Authority (PA), Nizar Banat, on Thursday, international actors hurried to issue statements of condemnation. It was an ultimate exercise in hypocrisy and insincerity, as these same actors have sponsored – both financially and politically – the very PA security bodies that arrested and killed Banat.

Indeed, these actors have invested billions of dollars in the PA’s security-sector reform project, and sponsored a process aiming to empower the PA’s security establishment, professionalise authoritarianism and criminalise resistance.

In the aftermath of Banat’s killing, the European Union delegation to the Palestinians announced that it was “shocked and saddened by the death of activist and former legislative candidate Nizar Banat following his arrest by the PA security forces last night”. The Representative Office of Canada to the Palestinian Authority declared that it was “deeply shocked and saddened”, while the United Nations Special Coordinator for the Middle East Peace Process was “alarmed” and “saddened”, urging a “transparent investigation”.

Yet, these and other western actors are, both directly and indirectly, complicit in Banat’s killing.

The killing of Banat, who had been arrested at least eight times by PA security forces over the past decade and survived a number of assassination attempts, offers a dramatic and devastating illustration of the PA’s security doctrine, adopted as part of its internationally sponsored state-building venture since 2007.

That doctrine has not only induced a failed state (or made the idea of a statehood a mere myth or hallucination) but also resulted in the growth of authoritarian trends and structures of repression, rather than a process of democratisation, inclusiveness and accountability.

The internationally sponsored security reform processes – the lynchpin of the PA’s post-2007 state building project – have made structural authoritarianism part and parcel of the Palestinian political system, as the dominance of the PA security establishment extended to political circles, making them even more undemocratic. This was all sponsored and funded by American and European aid.

Under the pretext of the statehood project, a total synchronisation between political and security leadership emerged, wherein political leaders justify the actions of security agencies, who in turn protect the political leadership. This nexus is what killed Banat: his criticism of the PA led to his killing by PA security forces.

This dominance and synchronisation have superimposed another level of policing onto the Palestinian people, affecting many aspects of their daily lives. “After 2007, public gatherings are only allowed for weddings, funerals, or prison gatherings,” a refugee from Balata camp in the occupied West Bank told me.

Even if this is somewhat exaggerated, it clearly illustrates the authoritarian transformations that have taken place in Palestine amid the growing dominance of PA security forces and their entrenchment in almost every aspect of life, from employment, to banking, to political activism at universities, to social media, and beyond.

The international community is as guilty as the PA in creating and nourishing such a repressive context, and it is past time to hold both actors accountable.

The international community, both intentionally and unintentionally, empowered the wrong national Palestinian institutions under the Israeli settler-colonial system. It empowered security structures and institutions that would solidify the existing matrices of control, rather than expanding the narrow margin for freedom.

The Palestinian security sector comprises around 83,000 individuals in the occupied West Bank and Gaza. This sector, which employs close to half of all civil servants, accounts for nearly $1bn of the PA’s budget, and absorbs around 30 percent of total international aid disbursed to Palestinians.

The security sector consumes more of the PA’s budget than the education and agriculture sectors combined. The ratio of security personnel to the population is as high as one to 48, among the highest in the world.

But all of this fails to translate into better security provision for the Palestinian people, especially in relation to the main cause of their insecurity: Israel and its settler-colonial project and military occupation. Worse still, the above-mentioned figures translate into additional layers of suppression, repression and control apparatuses.

The rise of authoritarian governance structures, absence of democratic political processes and implementation of the PA’s security doctrine – which has sought to ensure a “state” monopoly over the use of violence in Palestinian society – have all contributed to the denial of Palestinian rights, including the right to basic human security. Banat’s killing is a case in point.

Statements of concern from key international actors cannot serve as a fig leaf for their complicity in this tragedy. This must be stopped, and the key is to hold these actors accountable for all the harm they have caused over the years by investing in “securitised” approaches that only impede the journey of the Palestinian people towards liberation and freedom.

Banat said: “If my body leaves, don’t let my voice die.” The protesters in the streets of Palestine, and their anger against the PA and its security forces, are amplifying Banat’s voice – and the international community must listen prudently.