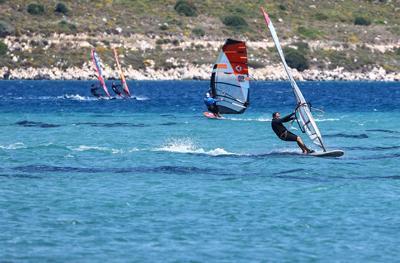 Alaçatı, Turkey’s leading spot in windsurfing and standing out with its architecture and authentic stone houses, is expected to have a dynamic tourism season this year.

Alaçatı, known as an infantry and cavalry village in the Ottoman period, is now one of the most popular tourist destinations in Turkey. Its historical stone houses and cobblestones are a symbol of the western town.

Most of the stone houses in Alaçatı serve as hotels. There are still over 600 boutique hotels on the streets of the town. Drawing people with these quiet and small hotels during the pandemic period, Alaçatı is also an important center for windsurfing, as it stays windy for about 300 days a year.

Speaking to the state-run Anadolu Agency, Alaçatı Tourism Association Chairman Celal Bayraktaroğlu said that Alaçatı was not affected by the changing holiday preferences during the pandemic like other destinations.

Pointing out that the demand for summer houses as well as small hotels is increasing, Bayraktaroğlu said that Alaçatı was lucky in this regard.

“I believe we will have a better season this year than last year. This is because of vaccination and awareness. We foresee that foreign tourists, especially domestic tourists, will come here from the second half of July. We are working with the Culture and Tourism Ministry and local municipalities to promote the region. The number of cases is also very low here. This is our advantage. If we promote it, we will attract more tourists. Of course, human health is very important. Considering the health of people living in the region, a good season awaits us with the increase in both the precautions and the administration of vaccination,” he said.

Stating that the wind of Çeşme Peninsula is famous, he said that they experienced a highland atmosphere by the sea.

“We spend the summer nights cool. This is a great advantage compared to the hot weather resorts. Tourists come as the wind blows,” he added.

Kemal Kaynaşoğlu, the manager of İmren Han Hotel and Mansions in the district, also stated that they expect a longer season this year compared to 2020.

Pointing out that hygiene standards are more applicable in boutique hotels, Kaynaşoğlu said that the star of boutique hotels would continue to shine this year, too.

Stating that most of the houses in Alaçatı were built between 1850 and 1900, architect Mithat Olcay said, “Volcanic stone of the region was used in the houses. Nearly 1,500 homes have been repaired so far. Alaçatı houses are the stone state of Safranbolu houses [which are famous in Central Anatolia].”

“In the past, these houses were used as living spaces. The ground floor of these houses was generally used as a barn for animals. There are also those who store grapes and tobacco, which are the livelihoods of the region. The buildings are at zero position to the street or avenue. The front of the house is zero to the street. Once inside, there is a garden at the back. This garden was used as a field at that time. Upper floors are mostly used as living spaces. The façade of the houses is on the north and south sides. This has two advantages. One is less sun in summer and the second is that these houses face sea breeze in summer, keeping these houses cool. In the summer, the heat in these houses does not bother you. In addition, there are wells at the beginning of all streets,” Olcay added.