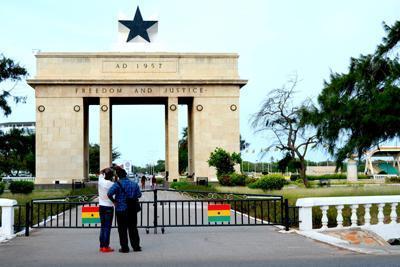 Yotam Gidron recalls a time when Israel — before its occupation of the Sinai Peninsula — was diplomatically engaged with Ghana’s Kwame Nkrumah and projecting itself as a plucky postcolonial nation.

By Yotam Gidron
Africa is a Country

In April 1959, the first Africa Freedom Day event was held at the Waldorf Astoria Hotel in New York. It was a ceremonious gathering that marked the anniversary of the First Congress of Independent African States, held in Accra exactly one year earlier. The only member of the United Nations not invited to attend the event was Israel. Israel already had diplomatic ties with several independent African states at the time, but among the sponsors of the event in New York were Egypt (then the United Arab Republic), Libya, and Tunisia, which threatened to boycott if Israel was included. Their position prevailed.

In Jerusalem, Israel’s exclusion from the “African Party” caused considerable anxiety, to which a pile of telegrams in the Israel State Archives testifies. In the following year, therefore, attempts were made to guarantee Israel’s participation in advance, and Ghana, upon Israel’s insistence, agreed to call for its invitation. This led to a confrontation between the Ghanaian and Egyptian ambassadors to the UN, but once again, the Arab position prevailed.

Ironically, Israel’s complaints that it was being unreasonably singled out only led to the exclusion of another country from the 1960 Freedom Day gathering: apartheid South Africa, the last country Israel wanted to be publicly associated with at the time.

There was a good reason behind Israel’s preoccupation with its right to attend these early celebrations of African independence. In April 1955, Israel was excluded from the first Asian-African Conference in Bandung, Indonesia. Not only that, but the participants of the conference also formally expressed their support “of the rights of the Arab people of Palestine and called for the implementation of the United Nations Resolutions on Palestine and the achievement of the peaceful settlement of the Palestine question.”

The Bandung conference prompted a reassessment of Israel’s foreign strategy. To prevent Arab states from mobilizing, as one official put it at the time, “a broad and unified front of Asian and African nations” against it at the UN, Israel soon began to seek alliances in Africa, making an effort to brand itself as a legitimate member of the postcolonial Afro–Asian world.

Israel’s relationship with Ghana marked the beginning of these diplomatic efforts. A consulate in Accra was established in 1956, prior to Ghana’s independence, and it was upgraded to an embassy upon independence the following year.

Ehud Avriel, Israel’s first ambassador to Ghana, recounted that at independence Kwame Nkrumah, Ghana’s first prime minister, presented the Israeli delegation with “the same list of urgent requirements he expected from other older states,” and that within a year “every single requirement on Nkrumah’s list had become a subject for intensive cooperation between Ghana and Israel.”

Ghana was to turn into a “showcase of Israel’s aid in Africa’s development,” and thus pave its way to international legitimacy.

Several bilateral initiatives were developed. The Israeli water planning authority assisted with water infrastructure development, the Israeli construction firm Solel Boneh helped establish the Ghana National Construction Company, and a Ghanaian-Israeli shipping company was established, 60 percent of which was owned by the government of Ghana and 40 percent by the Israeli shipping company Zim.

The two countries signed a trade agreement and Israel extended Ghana a $20 million loan. Israel also sold light arms and provided training to the Ghanaian army, while Israeli military officers assisted with the establishment of the Ghanaian Nautical College and the Flying Training School, which trained pilots for the Ghana Air Force and Ghana Airways. One Israeli expert even assisted with the establishment of the National Symphony Orchestra.

Ambassador Avriel became a close confidant of Nkrumah, who was able to facilitate contact with other African leaders.

In March 1958, Israeli Foreign Minister Golda Meir attended Ghana’s first independence anniversary as part of her first visit to the African continent. She met with both Nkrumah and Trinidadian Pan-Africanist George Padmore, and was invited by the latter to address representatives of multiple African liberation movements visiting Accra.

If Padmore and Nkrumah hoped to prevent Egyptian President Gamal Abdel Nasser and the Soviet Union from dominating the Pan-African agenda, Israel hoped that an autonomous African bloc over which Arab leaders had limited influence would strengthen its position in the international arena and allow it to obstruct Arab initiatives at the UN, particularly with regard to the right of return of Palestinian refugees.

Following the experience in Ghana, a decision was taken in Jerusalem to pursue ties with other African nations before they gained independence in order to curb Arab influence as early as possible. Israel began sending envoys to African countries to court those who were expected to lead their nations after independence, promising technical assistance and military training. This strategy worked.

By 1963, Israel had 22 embassies in Africa. The only two countries that achieved independence at the time south of the Sahara and did not establish ties with it were Mauritania and Somalia. The growth in Israel’s presence in the continent in the early 1960s was extraordinary, especially given that it did not build on any existing diplomatic networks from the colonial period.

The warm ties with Ghana were crucial for Israel’s expansion in Africa at the moment of the continent’s independence, but they were also short-lived.

By 1961, Nkrumah’s vision of a federated Africa drew Accra closer to Cairo. In January that year, the leaders of Ghana, Mali, Guinea, Morocco and the United Arab Republic convened in Casablanca against the background of the political crisis in Congo.

At Egypt’s behest, one of the topics discussed was the Israeli-Arab conflict, and a resolution was adopted, denouncing Israel as “an instrument in the service of imperialism and neo-colonialism not only in the Middle East but also in Africa and Asia.”

To pursue his political vision, Israeli diplomats assessed, Nkrumah was willing to take a more critical stance towards Israel. But Israel’s close relationship with France (then its main arms supplier), the U.S. and the U.K., was also undermining its relationship with Ghana.

Israel, in response to the developments in Casablanca, sought closer ties with the leading states of the opposing “Monrovia bloc,” whose members rejected the idea of an African federation propagated by the “Casablanca group” in favor of a greater emphasis on state sovereignty and non-interference.

The “Monrovia states” were not necessarily more pro-Israeli. Among them were Somalia, Libya and Mauritania. But they avoided the Israeli-Arab issue altogether for the sake of pragmatic multilateral cooperation, a position that ultimately served Israel as well.

Due to their opposition, the issue also remained largely off the agenda in the early years of the Organization of African Unity (OAU), established in Addis Ababa in May 1963. By then, Israel’s focus in Africa shifted to the eastern part of the continent, where it cultivated close (and more militarized) relationships with elites in Ethiopia, Uganda, Kenya, and Tanzania.

In the years of African independence, Israeli rhetoric portrayed Israel as a young, post-colonial nation and Zionism as a liberation movement, associating the Jewish state with other newly independent nations in the “Third World,” and rejecting the comparison between Zionism and imperialism. After the war of 1967 and Israel’s occupation of the Sinai Peninsula, this narrative became increasingly untenable, and Israel’s “golden age” in Africa gradually came to an end.

One thing that the brief Ghanaian-Israeli “honeymoon” of the late 1950s indicates, however, is also how from the very moment of African independence, concerns over Arab influence over African affairs meant that Israel was suspicious of initiatives that appeared to take too seriously the idea of Pan-African integration and unity. Such initiatives, clearly, threatened to complicate its efforts to project its influence into the continent.

More than five decades later, it is now Gulf countries that are trying to persuade African states — from Sudan to Mauritania — to normalize ties with Israel. But precisely for this reason and as extreme international inequality becomes ever more entrenched, the logic that underpinned earlier calls for continental unity continues to resonate.

“Singly we are too weak to avoid being used by those whose help we need, but together we shall be able to accept aid and investment without endangering our national integrity and independence,” Julius Nyerere wrote to Israeli Prime Minister David Ben-Gurion following the formation of the OAU in 1963. “It is in this spirit that we are working towards African Unity. We have no desire to isolate our continent from the rest of the world, nor to build an aggressive, hostile continent.”