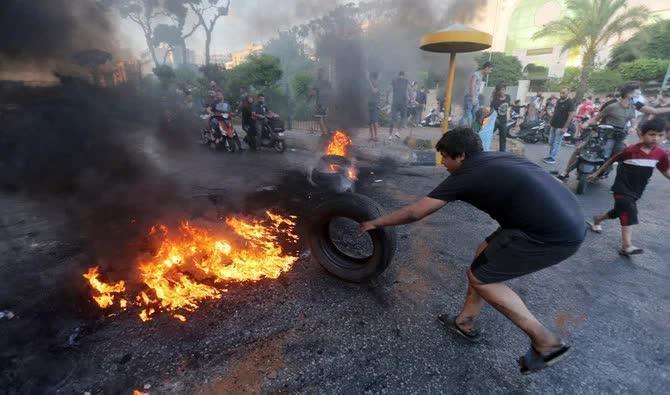 Nine soldiers and nine civilians were injured as a result of riots, which erupted in the backdrop of economic crisis. (AFP)

Ruling class reaching out to steal depositors’ money and has failed to form a govt: Al-Rahi

BEIRUT: The Lebanese Army was widely deployed in the streets of Tripoli in northern Lebanon on Sunday after a night of bloody protests. Nine soldiers and nine civilians were injured as a result of riots.

Protesters tried to storm the homes of politicians, including that of MP Mohammed Kabbara, whose guards fired to repel the protesters as demonstrators threw a petrol bomb at the entrance to the building.
Army units were stationed in front of government institutions in Tripoli, while roads were reopened to traffic. Eight people were injured in Sidon. Protesters also crossed the boundaries of the central bank’s offices in the two cities and fired petrol bombs.
According to eyewitnesses in Tripoli, the army used “excessive force” against the protesters, which was recorded by CCTV cameras at the scene. There were reports that the army quickly dispersed the protests due to “fears of an expansion in the spark of the protests.”
On Sunday, tensions simmered, with protests limited to temporarily blocking some roads in the Bekaa region, but the army reopened them. Protesters also blocked some roads in Sidon.
Maher Abu Shakra, the political organizer of the Lihaqqi (For My Rights) organization, told Arab News: “Those who are moving today in the street are the downtrodden class in Lebanon, and we find them in the cities of Tripoli and Sidon.
“In the street, they express their pain, while the middle class, whose livelihood capabilities are dwindling, is looking for alternative solutions to this situation, either through immigration or finding local alternatives.”
Abu Shakra added: “People … want to bring down those responsible (for the current situation) and hold them accountable.”
Car queues returned on Sunday to some gas stations that were selling the rest of their stock. The stations adhered to the official pricing, which is a condition set by the authorities for the supply of gasoline.
The new official price of gasoline is based on the exchange rate of LBP3,900 to the dollar. Previously, the official subsidy for gasoline was based on the exchange rate of LBP1,507 to the dollar.

Nine soldiers and nine civilians were injured as a result of riots, which erupted in the backdrop of a ‘hysterical’ rise in the exchange rate of the US dollar, the shortage of basic items, and rising prices.

The caretaker government had agreed to borrow from the Central Bank to purchase fuel, in the absence of any political solution. This financing will be from the mandatory reserves of deposits issued in hard currencies, which the governor of the bank had warned against using.
Meanwhile, during his Sunday sermon, Lebanon’s Maronite Patriarch Bechara Al-Rahi attacked the “ruling class that allows itself to reach out to the people’s money and (still) does not form a government.”
He said: “Here is the political group extending its hand today to steal depositors’ money by withdrawing from the mandatory reserves in the Banque du Liban (Central Bank) as if it wants to finance its electoral campaigns from depositors’ money. This is a prescribed crime. Any government decision or parliamentary legislation approving this withdrawal must be appealed to the competent judicial authority.”
Al-Rahi asked: “Has everything become possible except for the formation of a government? All the alternative measures that the authority resorts to are due to refraining from forming a rescue government that carries out the necessary reforms, making it possible for aid to come from brotherly and friendly countries and international institutions.”
Al-Rahi reiterated his commitment to demanding Lebanon’s neutrality, “with the strict implementation of its constitution and international resolutions.”