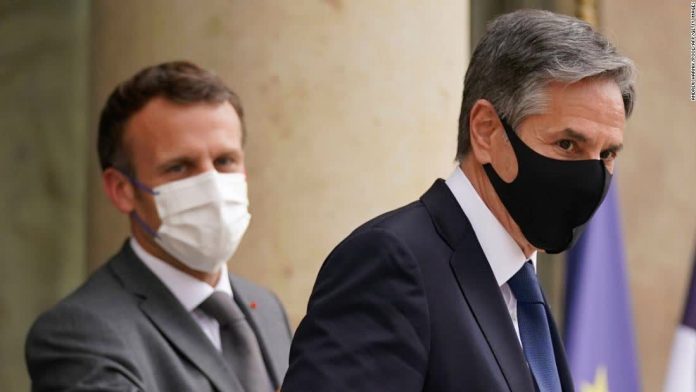 US Secretary of State Antony Blinken (R) leaves after meeting with French President Emmanuel Macron (L) at the Elysee Palace, in Paris, on June 25, 2021.

This story was excerpted from the June 28 edition of CNN’s Meanwhile in America, the daily email about US politics for global readers. Click here to read past editions and subscribe.

When Secretary of State Antony Blinken spoke about China in a New York Times interview in Paris, he offered one of the most revealing insights yet into the Biden administration’s foreign policy. Blinken said that France and the US were “on the same page” on the need to defend the free world order as China gains influence. The alternative, he warned, would be no global order or a Chinese-led world order that would be “profoundly illiberal in nature.”

Blinken, who delivered a tough US message to China in dust-up talks in Alaska in March, was putting colloquial meat on the bones of President Joe Biden’s recent warnings that democracy is under threat — and not only from illiberal trends in the West.

The concept of a new Cold War between the US and China is hardening into conventional wisdom in Washington. One critique however is that the original version was an ideological clash between the capitalists of the West and the communists of the Soviet bloc. The US and China are locked in a more classic duel between a rising power and a declining one — though Blinken certainly seems to see an ideological component.

Chinese President Xi Jinping, who will soon lead the Chinese Communist Party’s 100th anniversary celebrations, has adopted a far more strident position for China on the global stage. Beijing is flexing its power in the Pacific and beyond, and events in Hong Kong show Chinese repression on the march within its territory.

But whether Beijing is interested in (or capable of) waging a global battle against democracy is another question. Is Xi’s use of populist nationalism primarily designed to maintain support for an autocratic ruling Party, or is it the authentic expression of a globally ambitious Chinese foreign policy?

Either way, policymaking in Washington and nascent US political campaigns — from economics to infrastructure and from defense improving the social safety net — is increasingly formulated through a lens of inevitable confrontation with China. From here, at least, it’s getting harder to argue that the Cold War analogy misses the mark.

Pride marches took place in cities across the US this weekend around the anniversary of the 1969 Stonewall riots — with abundant commentary by marchers on issues including immigration, police brutality, and even foreign leaders. Above: Participants at New York City’s Dyke March, June 26.

It is the nature of a nation built on immigration that the human shockwaves of mass casualty events reverberate around the world. Victims from 93 nations perished on September 11, 2001, for instance. It’s the same story in Florida, after the horrific collapse of a condominium buried sleeping residents under a mountain of rubble, cutting short lives that had been nurtured across the globe and woven together in a shared space. Nine people are confirmed dead, but with more than 150 still unaccounted for, rescue workers fear the toll will rise steeply.

Among the missing are many people from South America, reflecting Florida’s Hispanic culture and its role as a gateway to the rest of the Western Hemisphere. They include family members of Paraguay’s First Lady Silvana López Moreira, who in a tragic twist, had traveled to the US for Covid-19 vaccinations. Argentina’s consulate in Miami said that nine of its nationals were missing in the condo collapse. Columbia, Uruguay, and Venezuela have said they are still trying to account for nationals missing. A relative of former Chilean President Michelle Bachelet’s father is also among those missing.

Israel has sent a delegation to help map the disaster site and to help Florida’s Jewish community to identify victims and survivors. At least 20 people associated with one local synagogue are believed to be missing as relatives cling to hope that survivors can be brought out of the pile of crushed masonry alive, even several days after the disaster. “The only thing that helps in these times is kindness and empathy and togetherness, because you can’t take away the reality,” Rabbi Sholom Lipskar told CNN’s Wolf Blitzer.

Canada meanwhile believes at least four citizens are missing. Many Canadians own property in Florida and thousands of “snowbirds” fly south each year to escape harsh northern winters. The exodus has been interrupted this year however by Covid-19 border closures.

Mike Gravel, a former US Senator from Alaska who died aged 91, had a rich political career. One highlight was his decision to read the Pentagon Papers — a damning secret history of the Vietnam War — into the congressional record after newspapers were banned from publishing them. But his most unique contribution to American political history might have been some of the strangest campaign ads of all time.

Released as part of a gadfly presidential campaign in 2008 after years in the political wilderness, one ad shows Gravel staring expressionless into the camera for over a minute, before tossing a rock into a pond and walking off into the distance. The Alaskan later explained that the spot was a metaphor and people were supposed to see the ripples in the pond as an analogy to the change one candidate can make. However strange they were, the ads worked to get Gravel attention; for a while he was a fixture on late night TV comedy shows. Still, he ended up with a 0% showing in the Iowa caucus — out of sight from the winner Barack Obama.