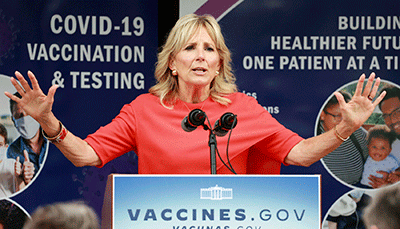 Japan and the United States are making arrangements for First Lady Jill Biden to visit Japan for the Tokyo Olympics opening ceremony, but President Biden is not likely to accompany her, the Yomiuri Shimbun daily said on Sunday.

Attending the opening ceremony, set for July 23, and holding a meeting with Japanese Prime Minister Yoshihide Suga are among the possible events the two governments are looking into for her, the newspaper said, without specifying sources.

Japan is the United States’ major ally in Asia, and President Biden has expressed his support for Suga’s resolve to hold the Games amid the coronavirus pandemic.

France, which will host the next summer Olympics in 2024 in Paris, announced last month President Emmanuel Macron planned to attend the opening ceremony.

There are persistent worries among the general public and medical experts in Japan that the world’s largest sporting event, delayed for a year due to COVID-19 outbreaks, could trigger a fresh wave of infections.