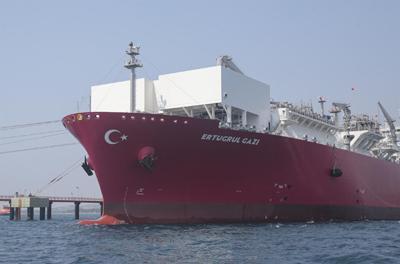 Speaking at the inauguration ceremony of the Ertuğrul Gazi in the southern province of Hatay on June 25, Dönmez said the vessel had the highest gasification capacity among the existing FSRUs in the world.

With speedy integration to the grid system and its ability to mobilize quickly, the ship can be quickly dispatched to regions where it is needed to operate resource points in areas of high consumption, Dönmez noted.

It will undertake its first ship-to-ship LNG transfer on June 29, he confirmed.

The vessel will help ensure that Turkey’s record of uninterrupted power supply will continue. It will be able to meet 8.2 percent of the daily natural gas capacity supplied to the grid system.

Turkey’s first FSRU was launched in the Aegean province of İzmir’s Aliağa district in December 2016 at a time when the country needed extra gas capacity to meet increased consumption due to the very cold weather conditions.

It will connect to facilities in Hatay and meet the annual household energy demand of the provinces of Hatay and Osmaniye.

Turkey imports around 45 billion cubic meters of natural per year, paying approximately $12 billion to pipeline exporters Russia, Azerbaijan and İran, as well as LNG suppliers, including Qatar, Nigeria, Algeria and the United States.

Nearly a third of the country’s gas needs are met with LNG supplies.

New discoveries in the Black Sea are expected to provide as much as 30 percent of the gas Turkey’s $730 billion economy requires when plateau production is reached, which is targeted for 2025.

Discoveries are also expected to allow Turkey to import cheaper gas and trim the annual average energy bill of around $44 billion.