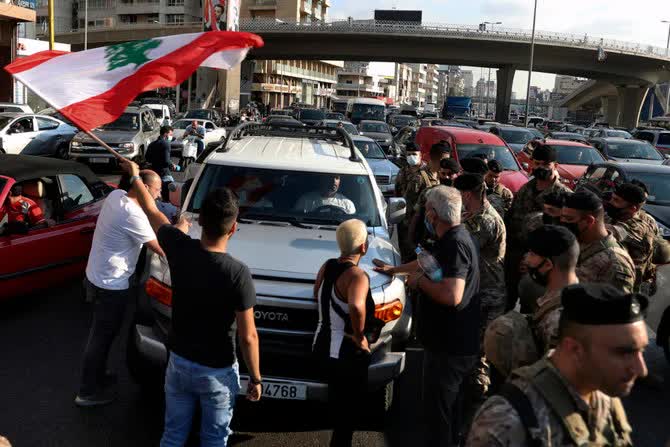 In the Latin American city of Bogota, a prosperous-looking lady goes to an ATM to withdraw cash and her card is rejected. This is how, in the fall of 2019, the widow of a Lebanese immigrant in Colombia first learned of Lebanon’s financial collapse and the bankruptcy of both its banking and public sectors.

Financial collapse strikes like a thunderbolt. Those affected emerge confused and disoriented, hardly realizing what hit them. Economic problems can also have financial repercussions. Unsurprisingly, there is a chicken and egg debate about this among economists: Do real economic factors affect financial phenomena, or is it monetary and financial considerations that affect the real economy? Whatever the answer is, the fact remains that, behind financial phenomena, there exists real economic factors.

For example, the 2008 collapse in the US was caused by a “real” economic factor: Bad loans, known as “subprime.” Bankers created complex instruments to reduce their risk and spread these globally. When the crisis hit, it dragged everyone down with it and people are still figuring out what struck them.

In Lebanon, the banking sector gave loans to the Banque du Liban (BDL) central bank that, in turn, lent the money to the government, which kept increasing its debt to pay the interest. Bankers are easy to blame, and probably deserve it; the other side of the story is what happens in the economy and drives the crisis. This is in a country that historically operated a budget surplus and had a sound monetary policy, with risk-averse bankers.

What the BDL did is no different from what the Federal Reserve and the Treasury Department are now doing in the US, with the trillions of dollars being printed and buying their own bonds. In any other economy, what would follow would be a race between economic recovery and debt servicing to make the latter sustainable. But in the US the government can print dollars as it pleases and feed its own Ponzi scheme indefinitely, as long as the US dollar is the global reserve currency.

There is no banking system that can survive a run and, once it happens, it is unstoppable. A run on a bank is when depositors rush to withdraw their money at the same time. It is caused by a sudden loss of confidence. This is what happened in Lebanon after November 2017.

Lebanon’s crisis actually started much earlier. As long ago as 2011, it was apparent that Lebanon was holding a tiger by its tail and its debt was unsustainable. The BDL’s tricks like “financial engineering,” or borrowing from Peter to pay Paul, could only buy time. But the time bought was not used to fix things or restore confidence in the institutions. If unsuccessful, such moves make the crisis worse — and they did.

That, simply put, was the financial side of the story. The controversy in Lebanon is mainly about blaming the banks and the BDL, with instant experts emerging who ignore real economic costs and the political dimension, which almost amount to an annual ransom — a levy on the Lebanese economy over 15 years that left the country bankrupt. What follows are attempts to redress the balance.

Looking at the real economy, as opposed to finance, shows how the country was turned into another Gaza. But with the right environment in the region, the potential is always there.

In the beginning was a 2004 UN resolution sponsored by France and the US that called for Syria’s withdrawal from Lebanon and the disarming of Lebanese and Palestinian organizations. Thus started the tug of war over Lebanon. At one end of the rope was the Hariri vision of Beirut as the Monaco of the region, with the help of its Arab and Western allies. On the other was Hezbollah and company — the “axis of resistance,” with Syria, Iran and Russia — taking a firmer grip. One side let go and the whole lot went tumbling into the abyss.

Years of unrest followed, with an atmosphere of terror and a string of assassinations, starting with former Prime Minister Rafik Hariri and continuing throughout the last 15 years. This was combined with a state of siege, through periods of political paralysis that crippled the country and the economy.

Downtown Beirut became a ghost town when it was occupied for 19 months between November 2006 and May 2008 in an effort to prevent the creation of the Special Tribunal for Lebanon. Then came a governmental crisis in early 2011 and another between 2013 and 2016 that created 29 months of limbo. This brought the economy to its knees, with no government, parliament or president until a compromise was accepted that gave Hezbollah absolute control.

A destructive war with Israel in 2006 destroyed the country’s infrastructure, but what took a greater toll on the economy in the long term was the constant state of war maintained by Hezbollah through its regular declarations. The results were felt in ruined summer tourist seasons, projects put on hold, and canceled investments. A generation that came back to the country full of hope in the early 1990s started making plans to emigrate again.

The coup de grace for the real economy was the crisis with the Gulf Cooperation Council (GCC). This impacted the tourism industry, investments, bank deposits and the estimated 350,000 Lebanese expats who work in the Gulf.

GCC states were also a major source of aid and accounted for about 40 percent of bank deposits. They contributed to international initiatives to help Lebanon. The Paris I, II and III and Cedre conferences pledged funds that never materialized because they were conditional on reforms, which were constantly blocked.

Major real estate investments, malls, franchises and supermarket chains had important GCC components. The creative sector, including engineering, consulting, advertising and design, also relied on GCC contracts, along with the entertainment industry and the cultural, educational and hospitality sectors, together with IT and innovation. Even agricultural exports were negatively impacted by the crisis with the GCC.

The failure to implement reforms came at a huge cost. Public sector employment became a massive drain on the economy in 2018, when salary increases and promotions were implemented without the requisite reforms. The electricity, telecoms and ports sectors suffered from endemic corruption and a lack of reform.

The war in Syria had a direct cost on the economy thanks to Hezbollah’s participation in the conflict. Thousands of young Lebanese men who participated in the fighting were killed or injured, in addition to the psychological effects and the burden of hundreds of thousands of refugees arriving in Lebanon. There is also the smuggling of subsidized commodities and currency into Syria, as well as the incorporation of Lebanon into the war economy there, with drugs, money laundering and terror activities. It is also possible there is a connection with the Beirut port blast that destroyed a large part of the city last August.

Under the gradual control of the Axis of Resistance, Lebanon was turned into another Gaza — besieged, isolated, under sanctions, impoverished and in a constant state of war.

The real economic impact of all these components is difficult to estimate, but some figures give an idea of scale: Losses were in the region of $4 billion annually from smuggling subsidized fuel out of the country and $4 to $5 billion annually from tax evasion. The deficit from corruption related to the electricity sector alone accounts for more than a third of the $93 billion of debt. Public sector salary adjustments were estimated by the Ministry of Finance to be about $800 million, but they turned out to be nearer $2.5 million and its director now preaches reform.

In spite of all that, the Lebanese economy grew by almost 20 times, from just below $3 billion at the end of the civil war in 1990 to almost $60 billion before the recent collapse — an indication that, with the right environment in the region, the potential is always there.

Disclaimer: Views expressed by writers in this section are their own and do not necessarily reflect Arab News’ point-of-view