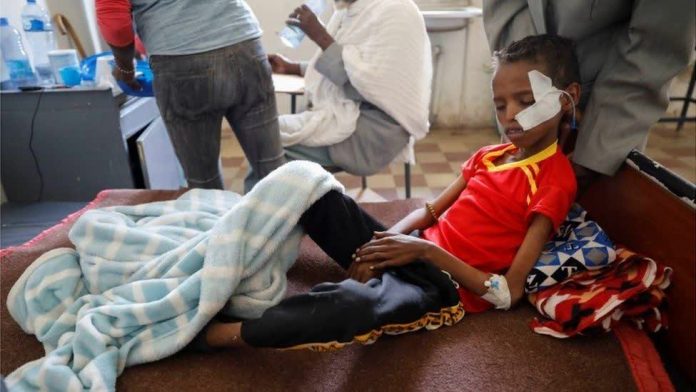 The Ethiopian government has declared a ceasefire in the Tigray region – eight months after Prime Minister Abiy Ahmed sent troops to oust its leadership.

The announcement came as witnesses reported anti-government troops in the streets of Tigray’s capital, Mekelle.

All sides have been accused of carrying out mass killings and human rights violations.

More than five million people are in urgent need of food aid, the UN says, with 350,000 facing famine.

On Monday, reports began to emerge that the Tigrayan fighters – who launched a new offensive last week – had forced the interim administration from Mekelle.

A number of people in Mekelle have also told the BBC they are celebrating federal troops’ departure. An unnamed source within the interim government told news agency AFP “everyone has left”, while two eyewitnesses told Reuters Tigrayan soldiers were seen in Mekelle.

Ethiopia’s government is yet to comment on reports that its troops have been pulled out.

But a statement released late on Monday did clarify some of the details around the ceasefire, saying it would “stay until the farming season ends”, allow aid to reach those in need and give space to find a political solution.

The United Nations (UN) Secretary-General Antonio Guterres, who spoke with Mr Abiy on Monday, said it was “essential that civilians are protected, humanitarian aid reaches the people in need and a political solution is found”. However, he was “hopeful” that the ceasefire would take place.

In a day of fast-moving events, government representatives have reportedly been fleeing from Mekelle – and not necessarily peacefully.

Sources in Mekelle have told the BBC people are celebrating on the streets while posts on social media appear to show supporters of the Tigrayan rebels parading with flags.

The TPLF has called on the city’s residents to stay calm and collaborate with its forces.

Why is there fighting in Tigray?

The party had had a massive fallout with Prime Minister Abiy Ahmed over political changes to the country’s ethnically based federal system – though the TPLF’s capture of military bases in Tigray was the catalyst for the invasion.

media captionEthiopia’s Tigray crisis: ‘The marks of the conflict can easily be seen’

Mr Abiy, a Nobel Peace Prize winner, declared that the conflict was over at the end of November, but fighting has continued.

Thousands of people have been killed. Tens of thousands have sought refuge in neighbouring Sudan.

All sides have been accused of numerous human rights abuses.

The TPLF has since joined forces with other groups in Tigray to form the Tigray Defence Forces.

On 10 June, the UN described a situation of famine in northern Ethiopia.

A UN-backed study found that 350,000 people were living in “severe crisis” in the war-torn Tigray region.

According to the assessment, the food situation in the region has reached the level of a “catastrophe”, which it defines as starvation and death affecting small groups of people spread over large areas.

The UN’s World Food Programme (WFP), Food and Agriculture Organization and children’s agency Unicef have all called for urgent action to address the crisis.

But the analysis was not endorsed by Ethiopia’s government, which has denied that there is a famine in the country.