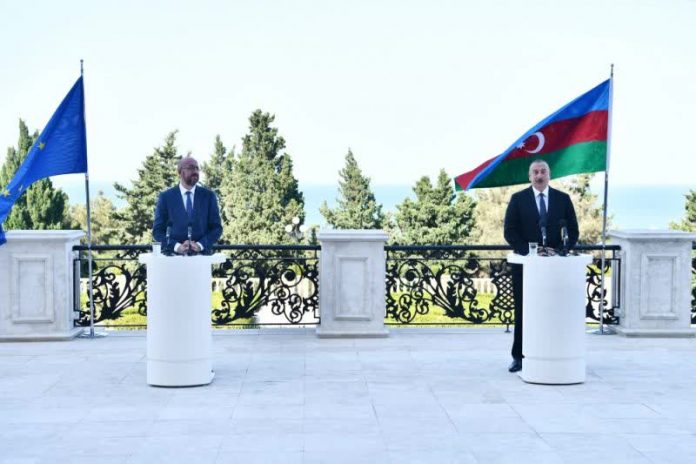 Baku/18.07.21/Turan: The partnership between the EU and Azerbaijan is based not on financial support but on the desire to work together, create innovations, conduct technological exchange and economic cooperation, according to the President of the EU Council, Charles Michel on July 18 at a press conference in Baku after the end of talks with Azerbaijani President Ilham Aliyev.

He said that during his visit he got acquainted with promising projects in Azerbaijan in the field of innovations, satellite communications and related infrastructure. “I got acquainted with activies aimed ar creating new opportunities in the Baku port, as well as on a regional scale. We understand that the partnership between the European Union and Azerbaijan is not based on financial support. On the contrary, it is a partnership based on the desire to work together, create innovations, develop technological exchange and economic cooperation. It is in this spirit that the two priorities are considered by the European Union from the standpoint of economic development – climate change and the digital revolution – should lie at the heart of projects we are launching together,” Michel continued.

It ought to be noted that another topic of the talks was the preparation for the December EU Eastern Partnership Summit. “It is important for us to exchange our views and meet expectations. Both sides are preparing for the summit, ” Michel said.

He noted that his tour over the Eastern Partnership countries is a testimony to the work of the European Union in the region. “This is due to our commitment to security, stability and prosperity in the region, the mobilization of capabilities and resources of the European Union as a result of dialogue with partners and understanding of varied expectations of the Eastern Partnership member-countries,” Michel said.

The third topic of the talks was “the situation with Azerbaijan and Armenia”. “In fact, I would like to thank you for your commitments when even before this visit, a few weeks ago, we had several telephone talks to exchange views on the analysis of the regional situation. These were the first steps. On the one hand, there are of mine maps issue, on the other, the issue of prisoners. At the first stage, this was decided. We hope that other stages of the said issue will take place in the near future,” Michel noted.

“At the same time, we had an opportunity to discuss the remaining issues in detail to thus reach certain solutions, and these options must be sustainable,” he continued.

The European Union is ready to support efforts and achieve progress on various issues, particularly on border delimitation.

“For this to happen, we are ready to provide European expert assistance and, if necessary, monitoring. As for the delimitation of borders, there is an issue of the deployment of armed forces near the disputed territories. I think this topic is also worth discussing,” the head of the EU Council said.

The European Union is also willing to participate and encourage regional cooperation efforts.

“We believe that peace, lasting peace means good agreements and their implementation. There are other issues that will be discussed sooner or later in order to make a lasting peace a reality for the sake of prosperity, stability and security,” Michel continued.

Finally, during the talks, the parties touched upon a number of “issues related to the broader geopolitical situation. “We have noted some efforts of Azerbaijan in a number of areas, especially in the field of secularism. There is a lot of debates about this in the world, ” Michel said.

Also, he emphasized that “the EU values are a political project directed to supporting democracy, human rights and freedoms.”

“However, this project is also aimed at developing strong relations with a number of partners for implementation of projects of mutual interest,” Michel said.—0-