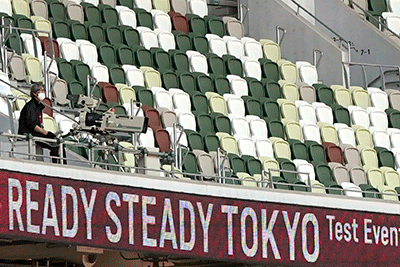 After a yearlong delay and months of hand-wringing that rippled across a pandemic-inflected world, a Summer Games unlike any other is at hand. It’s an Olympics, sure, but also, in a very real way, something quite different.

No foreign fans. No local attendance in Tokyo-area venues. A reluctant populace navigating a surge of virus cases amid a still-limited vaccination campaign. Athletes and their entourages confined to a quasi-bubble, under threat of deportation. Government minders and monitoring apps trying — in theory, at least — to track visitors’ every move. Alcohol curtailed or banned. Cultural exchanges, the kind that power the on-the-ground energy of most Games, completely absent.

And running like an electric current through it all: the inescapable knowledge of the suffering and sense of displacement that COVID-19 has ushered in, both here and around the world.

All signs point to an utterly surreal and atomized Games, one that will divide Japan into two worlds during the month of Olympics and Paralympics competition.

On one side, most of Japan’s largely unvaccinated, increasingly resentful populace will continue soldiering on through the worst pandemic to hit the globe in a century, almost entirely separated from the spectacle of the Tokyo Games aside from what they see on TV. Illness and recovery, work and play, both curtailed by strict virus restrictions: Life, such as it is, will go on here.

Meanwhile, in massive (and massively expensive) locked-down stadiums, vaccinated super-athletes, and the legions of reporters, IOC officials, volunteers and handlers that make the Games go, will do their best to concentrate on sports served up to a rapt and remote audience of billions.

Since the pandemic canceled the originally scheduled version in 2020, the Japanese media have been obsessed with the Games. Will they really happen? If so, what will they look like? And the endlessly fascinating — shocking, really, to many here — prospect of staging an Olympics during what can seem like a slow-motion national disaster has permeated the society nearly as thoroughly as the virus.

“The mindset that the Olympics can be pushed through by force and that everyone should obey the order has invited this mess,” the Asahi newspaper said in a recent editorial. IOC and Japanese officials “should learn that their absurdity has deepened the public distrust in the Olympics.”

Of course, it’s too early to predict what, exactly, will happen when these cross-currents converge during the Games, as about 15,000 athletes and, by some estimates, nearly 70,000 officials, media and other participants insert themselves into the flow of Tokyo life in sequestered and limited, yet ubiquitous, ways.

Will the normally hospitable Japanese people warm to the visitors or become increasingly infuriated as they watch fully vaccinated guests enjoy freedoms they haven’t experienced since early 2020? Will the Olympians and others play by the rules meant to protect the country they’re visiting? Will they bring in variants that will spread through Japan? Will the effort to vanquish the coronavirus be impeded?

One thing seems certain: These games will have far less of what the world has come to expect from the Olympics, with its attractive mixture of human competition at the highest level amid celebrations and cultural exchanges on the sidelines by fans, athletes and local people.

Usually, the Olympics are a vibrant time — a two-week party for a host city eager to show the world its charms. They teem with tourists and all the fun that an exotic locale and interesting visitors can bring. This go-round. though, will be strictly choreographed for TV, with the skeptical people of Japan largely isolated as yet another state of emergency places more constraints on their daily lives.

The story that foreign visitors focus on for these Games will also be very different from the reality on the nation’s streets.

Barring catastrophe, the IOC, local newspapers (many of which are also sponsors), Japanese TV, and rights holders like NBC will likely be unified in their message: Just getting through will be cast as a triumph.

Not many visiting journalists, however, will linger in ICUs or chase down interviews with angry residents who feel these Games were hoisted onto the nation so that the IOC could collect its billions in TV money.

More likely, there will be plenty of made-for-TV images of a tour-book version of Japan, one that mixes shots of ancient history, tradition and natural beauty with a high-tech, futuristic sensibility: Think of a sleek, silver bullet train, for instance, streaking past a snow-capped Mount Fuji. A reality, in other words, riddled with easy-to-digest cliches and predictable establishing shots.

As Tokyo grapples in coming weeks with the intrinsic oddness of these pandemic Olympics, the disconnect between sports and sickness, rhetoric and reality, visitor and local will be hard to miss for many here.

Just how a reluctant Japan will weather a high-risk experiment that might come to define the coronavirus pandemic in future years, however, must wait until the visitors pack up and go home. Only then will the true price that the host nation must pay for these Surreal Games come into focus.