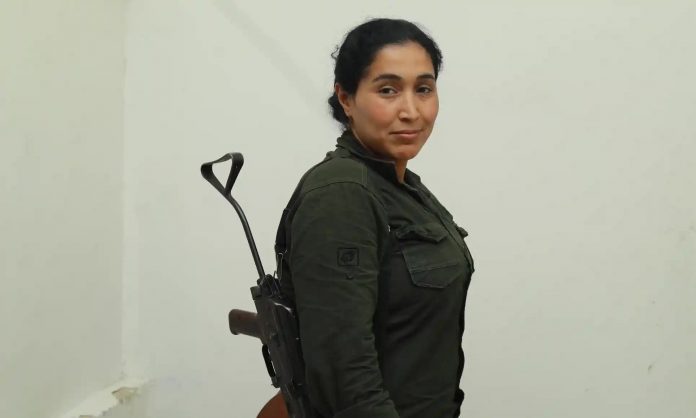 Zeynab Serekaniye, a Kurdish woman with a gap-toothed smile and a warm demeanor, never imagined she’d join a militia.

The 26-year-old grew up in Ras al-Ayn, a town in north-east Syria. The only girl in a family of five, she liked to fight and wear boys’ clothing. But when her brothers got to attend school and she did not, Serekaniye did not challenge the decision. She knew it was the reality for girls in the region. Ras al-Ayn, Arabic for “head of the spring”, was a green and placid place, so Serekaniye settled down to a life of farming vegetables with her mother.

That changed on 9 October 2019, days after former US president Donald Trump announced that US troops would pull out of north-east Syria, where they had allied with Kurdish-led forces for years. A newly empowered Turkey, which sees the stateless Kurds as an existential threat, and whose affiliated groups it has been at war with for decades, immediately launched an offensive on border towns held by Kurdish forces in north-east Syria, including Ras al-Ayn.

Just after 4pm that day, Serekaniye says, the bombs began to fall, followed by the dull plink and thud of mortar fire. By evening, Serekaniye and her family had fled to the desert, where they watched their town go up in smoke. “We didn’t take anything with us,” she says. “We had a small car, so how can we take our stuff and leave the people?” As they fled, she saw dead bodies in the street. She soon learned that an uncle and cousin were among them. Their house would become rubble.

After Serekaniye’s family was forced to resettle farther south, she surprised her mother in late 2020 by saying she wanted to join the Women’s Protection Units (YPJ). The all-female, Kurdish-led militia was established in 2013 not long after their male counterparts, the People’s Protection Units (YPG), ostensibly to defend their territory against numerous groups, which would come to include the Islamic State (Isis). The YPG have also been linked to systematic human rights abuses including the use of child soliders, forced displacements and looting.

If these people come here, they will do the same to us. We will not accept that, so we will stand against them

Serekaniye’s mother argued against her decision, because two of her brothers were already risking their lives in the YPG.

But Serekaniye was unmoved. “We’ve been pushed outside of our land, so now we should go and defend our land,” she says. “Before, I was not thinking like this. But now I have a purpose – and a target.”

Serekaniye is one of approximately 1,000 women across Syria to have enlisted in the militia in the past two years. Many joined in anger over Turkey’s incursions, but ended up staying.

“In discussions [growing up], it was always, ‘if something happens, a man will solve it, not a woman’,” says Serekaniye. “Now women can fight and protect her society . This, I like.”

According to the YPG, a surge in recruitment has also been aided by growing pushback against and awareness of entrenched gender inequality and violence over recent years. In 2019 the Kurds’ Autonomous Administration of North and East Syria passed a series of laws to protect women, including banning polygamy, child marriages, forced marriages and so-called “honour” killings, although many of these practices continue. About a third of Asayish officers in the Kurdish security services in the region are now women and 40% female representation is required in the autonomous government. A village of only women, where female residents can live safe from violence, was built, evacuated after nearby bombings, and resettled again

Yet evidence of the widespread violence that women continue to face is abundant at the local Mala Jin, or “women’s house”, which provide a refuge and also a form of local arbitration for women in need across Syria. Since 2014, 69 of these houses have opened, with staff helping any woman or man who come in with problems they’re facing including issues of domestic violence, sexual harassment and rape, and so-called “honour” crimes, often liaising with local courts and the female units of the Asayish intelligence agency to solve cases.

On a sun-scorched day in May, three distraught women arrive in quick succession at a Mala Jin centre in the north-eastern city of Qamishli. The first woman, who wears a heavy green abaya, tells staff that her husband has barely come home since she’s given birth. The second woman arrives with her husband in tow, demanding a divorce; her long ponytail and hands shake as she describes how he’d once beaten her until she had to get an abortion.

The third woman shuffles in pale-faced and in a loose dress, with rags wrapped around her hands. Her skin is raw pink and black from burns that cover much of her face and body. The woman describes to staff how her husband has beaten her for years and threatened to kill a member of her family if she left him. After he poured paraffin on her one day, she says, she fled his house; he then hired men to kill her brother. After her brother’s murder, she set herself on fire. “I got tired,” she says.

The Mala Jin staff, all women, tut in disapproval as she speaks. They carefully write down the details of her account, tell her they need to take photographs, and explain they plan to send the documents to the court to help secure his arrest. The woman nods then lies down on a couch in exhaustion.

Behia Murad, the director of the Qamishli Mala Jin, an older, kind-eyed woman in a pink hijab, said says the Mala Jin centres have handled thousands of cases since they started, and, though both men and women come in with complaints, “always the woman is the victim”.

A growing number of women visit the Mala Jin centres. Staff say that this doesn’t represent increased violence against women in the region, but that more women are demanding equality and justice.

The YPJ is very aware of this shift and its potential as a recruitment tool. “Our aim is not to just have her hold her gun, but to be aware,” says Newroz Ahmed, general commander of the YPJ.

For Serekaniye it was not just that she got to fight, it was also the way of life the YPJ seemed to offer. Instead of working in the fields, or getting married and having children, women who join the YPJ talk about women’s rights while training to use a rocket-​propelled grenade. They are discouraged, though not banned, from using phones or dating and instead are told that comradeship with other women is now the focus of their day to day lives.

Commander Ahmed, soft-spoken but with an imposing stare, estimates the female militia’s current size is about 5,000. This is the same size the YPJ was at the height of its battle against Isis in 2014 (though the media have previously reported an inflated number). If the YPJ’s continued strength is any indication, she adds, the Kurdish-led experiment is still blooming.

The number remains high despite the fact that the YPJ has lost hundreds, if not more, of its members in battle and no longer accepts married women (the pressure to both fight and raise a family is too intense, Ahmed says). The YPJ also claim it no longer accepts women under 18 after intense pressure from the UN and human rights groups to stop the use of child soldiers; although many of the women I met had joined below that age, though years ago.

Driving through north-east Syria, it is no wonder that so many women continue to join, given the ubiquitous images of smiling female shahids, or martyrs. Fallen female fighters are commemorated on colourful billboards or with statues standing proudly at roundabouts. Sprawling cemeteries are filled with shahids, lush plants and roses growing from their graves.

The fight against Turkey is one reason to maintain the YPJ, says Ahmed, who spoke from a military base in al-Hasakah, the north-east governorate where US troops returned after Joe Biden was elected. She claims that gender equality is the other. “We continue to see a lot of breaches [of law] and violations against women” in the region, she says. “We still have the battle against the mentality, and this is even harder than the military one.”

Tal Tamr, the YPJ base where Serekaniye is stationed, is a historically Christian and somewhat sleepy town. Bedouins herd sheep through fields, children walk arm-in-arm through village lanes, and slow, gathering dust storms are a regular afternoon occurrence. Yet Kurdish, US and Russian interests are all present here. Sosin Birhat, Serekaniye’s commander, says that before 2019 the YPJ base in Tal Tamr was tiny; now, with more women joining, she describes it as a full regiment.

The base is a one-storey, tan-coloured stucco building once occupied by the Syrian regime. The women grow flowers and vegetables in the rugged land at the back. They do not have a signal for their phones or power to use a fan, even in the sweltering heat, so they pass the time on their days off, away from the frontline, having water fights, chain smoking and drinking sugary coffee and tea.

Yet battle is always on their minds. Viyan Rojava, a more seasoned fighter than Serekaniye, talks of taking back Afrin. In March 2018, Turkey and the Free Syrian Army rebels it backed, launched Operation Olive Branch to capture the north-eastern district beloved for its fields of olive trees.

Since the Turkish occupation of Afrin, tens of thousands of people have been displaced – Rojava’s family among them – and more than 135 women remain missing, according to media reports and human rights groups. “If these people come here, they will do the same to us,” says Rojava, as other female fighters nod in agreement. “We will not accept that, so we will hold our weapons and stand against them.”

Serekaniye listens intently as Rojava speaks. In the five months since she joined the YPJ, Serekaniye has transformed. During military training in January, she broke a leg trying to scale a wall; now, she can easily handle her gun.

As Rojava speaks, the walkie-talkie sitting beside her crackles. The women at the base were being called to the frontline, not far from Ras al-Ayn. There is little active fighting these days, yet they maintain their positions in case of a surprise attack. Serekaniye dons her flak jacket, grabs her Kalashnikov and a belt of bullets. Then she gets into an SUV headed north, and speeds away.