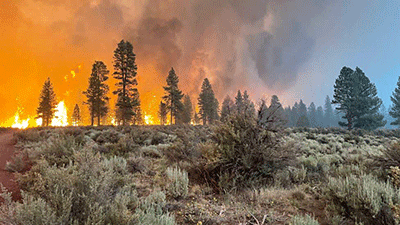 In the US state of Oregon, the nation’s largest active wildfire has burned through more than 300,000 acres, prompting thousands of evacuations.

Over 2,000 fire-fighters are tackling the so-called Bootleg Fire – one of the largest blazes in Oregon’s history.

Since starting on 6 July, it has already scorched an area larger than the city of Los Angeles.

It is one of more than 80 major fires raging across 13 US states, spurred by heat waves and high winds.

The Bootleg Fire, named after the nearby Bootleg Spring, has forced at least 2,000 residents from mostly rural areas to abandon their homes. At least 160 homes and buildings have been destroyed so far.

Authorities said that a quarter of the fire’s perimeter had been contained.

The fire, burning 300 miles (480km) south-east of Portland has destroyed over 160 buildings and threatens thousands of others.

Two evacuation centres have been set up for residents in several cities, including Klamath Falls and Redmond.

This week’s forecast is unlikely to help efforts to control the fire. Temperatures are expected to be between 10 and 15 degrees above normal and there is drought too.

Wildfires have already torn through more than 1.2m acres of the country this year, mainly in western states, according to the National Interagency Fire Center.

More than 4,000 blazes have been recorded by the organisation so far in 2021, which is almost double last year’s total.

In California alone, five times as many acres have burned compared with the same period last year.

One of the state’s recent fires, called the Dixie Fire, has been linked to PG&E – a utility firm whose power lines were blamed for starting the 2018 Camp Fire, the deadliest in California’s history.

The spate of fires marks a heavier-than-normal start to the wildfire season in the western US, and has coincided with record-breaking heat waves in recent weeks.

Meanwhile in neighbouring Canada, more than 150 new fires started burning in this past weekend alone, according to the Canadian Interagency Forest Fire Centre.

Experts have told the BBC that due to a multi-year drought, the potential for a historic 2021 North American wildfire season is “sky-high”.

Many scientists say that climate change increases the risk of the hot, dry weather that is likely to fuel wildfires.

The world has already warmed by about 1.2C since the industrial era began and temperatures will keep rising unless governments around the world make steep cuts to emissions.