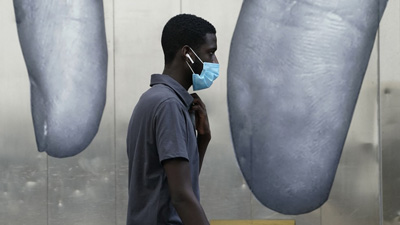 As a journalist, John Scott Lewinski hustles around the world, writing for more than 30 international news organization covering news, lifestyle and technology. As an author, he is represented by the Fineprint Literary Agency, New York.

There’s no need for fully vaccinated people to wear masks, so why are places like Los Angeles and New York bringing back mandates on them? People will vote with their faces, and reject these petty attempts to still be controlled.

The narcissistic pencil-pushers Covid-19 thrust into undeserved positions of power will never freely accept the loss of that attention, adoration, and control. It’s not in their nature. The pandemic is the finest event of their adult lives, and they will mourn for these days when they finally pass. They will use any excuse, any statistic, and any rationalization they can find to maintain their esteemed position.

As a result, the Western world is witnessing a tragically predictable retreat from the virus once again, despite the clear decline of Covid-19 in the face of massively successful vaccines.

Like every other living thing on this planet, a virus fights to survive, and it’s doing so now by attacking the willfully unvaccinated or the inadequately treated with variants. Those people are quite literally the only hosts left, with as many as 75% of adults already possessing immunity in many settled regions of the hemisphere. Still, that viral surge kicked up case numbers, and the health officials and government advisers breathed a gleeful sigh of relief.

Right on their witless, simpering cue, they rushed to the podium to reassert their dwindling authority and relevance. Los Angeles and New York are moving toward reinstating full mask mandates. The US State Department is ordering citizens to avoid certain foreign travel. You can see the excitement in their eyes and hear the dishonesty in their voices when they pretend to lament the need for clamping their claws back down on societies struggling to recover from several rounds of on-again, off-again interference.

We’re past this nonsense now. Effective vaccines have remained freely available for six months. There remain ample stockpiles. If anyone you meet is not vaccinated, it is either because they acquired natural immunity or because they made the conscious choice not to have it. If you took the vaccine, you are all but scientifically and legally immune from the effects and restrictions of the pandemic.

Ordinary people will resist these strictures, in ever increasing numbers.

The only way this stops anywhere, in any country, within any socio-political system, is if the citizenry refuses to tolerate it. Only open rebellion will eventually restore any shade of governmental sanity by forcing them to realize their warnings no longer exercise any gravitas. They must be made to choose between discontinuing their unwelcome and unnecessary interference in the lives of the vaccinated –  or finally giving into their passionate desire to apply force to make other human beings obey them. Make them get ugly. Drive them to reveal their true selves.

Consider: regardless of their psychological or political makeup, these autocrats are still health professionals. They know, yet continue to ignore, the widespread and obvious evidence that the pandemic is vanishing from our daily lives. They have access to the facts that any current spike in cases is largely hitting young people who chose not to get the vaccine because Covid-19 exacts a mild toll on people under 50. Most importantly, the feckless lords and masters realize full well the fully vaccinated cannot give or get the virus, except in a small number of cases.

Still, they look past all of this when there’s an opportunity to exercise any available authority. They are despots, unaware of their own tyranny while they wrap themselves in a smug, self-worshiping blanket of faux compassion.

So, again, people will rebel.

We’re not talking about armed insurrection, Molotov cocktails, and assassination-studded coup d’etats. You don’t have to scribble something on a sheet of torn cardboard, walk in the street and take a selfie to advertise your anger. There’s no need to call for violence or endless recall elections, even if your heart longs for revenge on the panic-prone dictators who thought nothing of ruining countless lives with their whims and science-raping declarations.

The process of rebellion is as simple as rejection, and rejection is as simple as an individual choice not to accept endless directives randomly issued by often unelected authorities. People who have got that vaccination card in their pocket, or the app on their phone that proves they took responsibility for their own health, will quietly, and in ever growing numbers, refuse to wear a mask. They will venture where they like during any lockdown. Travel anywhere they choose while the borders are open. Do whatever they must to live and whatever else they choose to keep that fire of resistance burning.

If a business or private venue mandates masks, so be it. They have a right to do so, and you have the right to choose whether you want to enter or patronize such a business.

Such resistance frightens the Covid kings and queens more than infection rates or ICU occupation. They dread that moment when they look out from those podiums and realize no one who took the jab cares about a single word they say – that no one will change any aspect of behavior based on their edicts. That’s death to them and their 18 months of prestige, limelight, and notoriety.

Regardless of your political affiliation, if you are a man or woman who values freedom of thought and action as not only valuable, but as essential to the human spirit as food, water. or air is to the body, this sort of quiet refusal to cower, bow, and scrape to clear insanity is an absolute good.

It is long past the time that sensible, responsible, men and women who played along during the pandemic – those who masked up, kept their distance, got the vaccine, etc. – can be made to suffer punishment for those too foolish or lazy to do the same. If the coronavirus survives in those unwilling to take the basic steps required to avoid it, I wish it well – and those who suffer from it can live with its symptoms.

There is no scientifically supported reason for vaccinated people to wear a mask or avoid public spaces. If you count yourself amongst that number, you will resist and reject any new mask mandates declared in response to Covid-19. People will do that not because they’re healthy. Not because they’re conservative or progressive. But because they’re free, rational human beings who will no longer be subject to the passing fancies of the irrational few who long to control and be controlled. These people will embrace and celebrate the virus as long as we allow it.