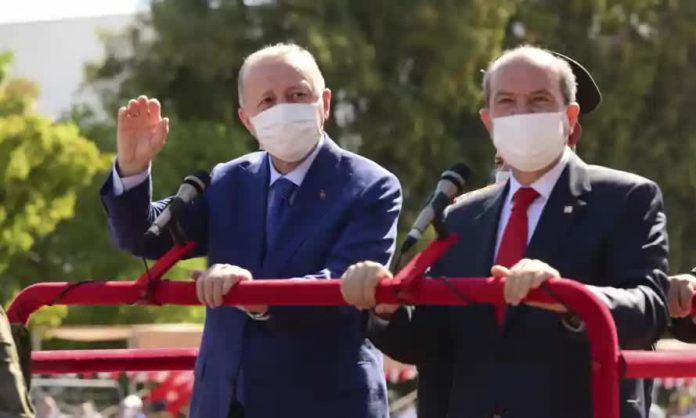 Turkey’s president, Recep Tayyip Erdoğan, left, with the Turkish Cypriot leader, Ersin Tatar, at a military parade on Tuesday marking the 47th anniversary of Ankara’s invasion of the northern portion of Cyprus following a coup by the Greek military. Photograph: Nedim Enginsoy/AP

The EU’s foreign policy chief has criticised Turkey’s president, Recep Tayyip Erdoğan, for his statements while reopening the town of Varosha in Cyprus.

On Tuesday the EU’s top diplomat, Josep Borrell, said plans announced by Erdoğan and the Turkish Cypriot leader, Ersin Tatar, to further open the former resort, abandoned since Ankara’s invasion of the island in 1974 and viewed as a ghost town, constituted an “unacceptable unilateral decision”.

“The EU once again underlines the need to avoid unilateral actions in breach of international law and renewed provocations, which could raise tensions on the island and compromise a return to talks on a comprehensive settlement of the Cyprus issue,” Borrell said in a statement.

He added that the EU bloc would monitor how a closed-door consultation on Cyprus went at the UN security council on Wednesday and “decide on next steps accordingly”.

Erdoğan vowed that life would restart in Varosha as he took an uncompromising stance during a visit to mark 47 years since the invasion that split the island of Cyprus.

The east coastal resort of Varosha, once the playground of celebrities and nicknamed a “jewel of the Mediterranean”, was left as a fenced-off ghost town, with luxury hotels abandoned to the weeds. The invasion emptied the town of its Greek Cypriot residents.

Turkish troops had seized the northern third of Cyprus in response to an aborted coup in Nicosia aimed at attaching the country to Greece. The island has since been divided between the Greek Cypriot-run Republic of Cyprus and the Turkish Republic of Northern Cyprus, which is recognised only by Ankara.

Tatar, standing by Erdoğan’s side, announced the second phase of a plan to expand the reopening of Varosha.

The Turkish army last year restored public access to parts of the Varosha beachfront, and a main thoroughfare, Demokratias Avenue, has been cleared.

The internationally recognised government in Nicosia has stressed that Varosha is “a red line not to cross”, and strongly condemned Erdoğan’s visit to northern Cyprus last November.

Erdoğan, in his speech on Tuesday, insisted on a two-state solution for the island, an idea firmly rejected by the republic of Cyprus and Brussels.

Borrell said in the statement: “The EU remains fully committed to the comprehensive settlement of the Cyprus problem on the basis of a bi-zonal, bi-communal, federation with political equality.”