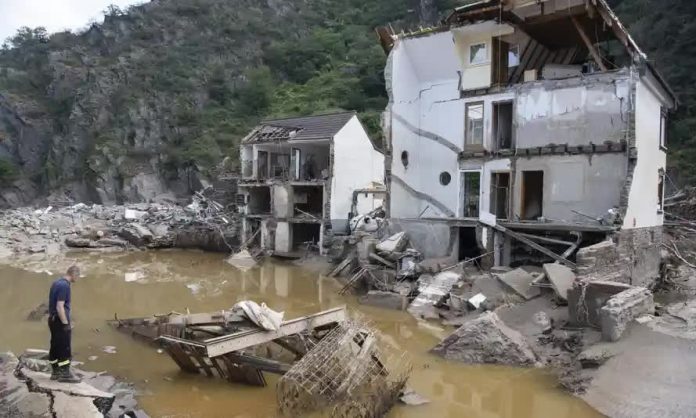 A fireman stands in front of a completely destroyed house in the village of Mayschoß, Germany. Photograph: Boris Roessler/AP

The Guardian-Philip Oltermann in Berlin

It was a slogan that cut to the chase: “Everybody is talking about Germany. We talk about the weather.”

The provocative message – itself an inversion of the title of an essay by Red Army Faction terror group founder Ulrike Meinhof (“Everybody talks about the weather. We don’t”) – was at the heart of the West German Green party’s 1990 election campaign, but has rarely felt more relevant than today as catastrophic floods in western Germany have brought extreme weather events to the centre of the national debate little more than two months before federal elections.

And yet the German Greens in July 2021 are noticeably cautious of drawing an explicit link between the climate emergency and weather that has devastated towns across the country and claimed the lives of at least 164 people.

Annalena Baerbock, the Greens’ candidate for chancellor, cut short her summer holiday to visit the affected area last week but declined to take TV camera crews with her. Her co-leader, Robert Habeck, sent a video message from northern Germany: “Now is the time of rescue helpers and not politicians like me, who would only stand in their way”, he said.

One Green delegate, Konstantin von Notz, on Wednesday posted a picture of upended cars amid floodwater and debris on Twitter, criticising other parties’ reluctance to commit to carbon reduction measures and insisting only his party would make climate protection “priority number one”. Within 24 hours, Von Notz deleted and apologised for his “polemical tweet”.

When Baerbock finally spoke up on Monday, giving an interview to news magazine Der Spiegel, she listed “ambitious climate protection” measures only as the third of three steps required to address the situation: centralising the country’s disaster management system and adjusting the design of German cities and waterways to prepare for future floods, she insisted, were of equal importance.

The strategic thinking rests on the hope that the electorate will draw its own connection between the increase of freak weather events and a climate crisis unfolding over the long term. Making the link explicit would open up the Greens to charges of politicising a catastrophe before the bodies of the dead have been recovered, and playing into its image as a Besserwisserpartei, a party of know-it-alls.

And although its “we talk about the weather” slogan may hit a nerve in 2021, in 1990, the year of German reunification, it played disastrously with the electorate. The Greens only maintained a presence in the Bundestag thanks to an alliance with ecological outfits in the former east.

Since Baerbock and Habeck took over the party leadership in 2018, the Greens have worked hard to come across a party that does not only talk about the weather, but also about Germany. In this election’s poster campaign, launched earlier this month, they go out of their way to sway voters who fear radical policies could damage the economy: “Effective climate protection: secure jobs”, reads one poster, “Economy and climate without crisis” another.

After the launch of its campaign in April led the Greens to briefly leapfrog the Christian Democratic Union (CDU) of Angela Merkel and her designated successor, Armin Laschet, into the top spot, the environmental party has in recent weeks struggled to get on the front foot, hampered by a prolonged public debate about Baerbock’s qualifications and plagiarised passages in a non-fiction book bearing her name.

The hope in the Greens’ camp is that events of the last week could change the dynamics of the campaign trail and finally allow its candidate to play to her strengths. Even then, few Green supporters are confident their party can close the 10-point gap to the Christian Democrats.

In postwar German history, floods have often made or remade political careers – if those politicians had their hands on the levers of power at the time. Decisive handling of the flooding of Hamburg in 1962 raised the profile of Helmut Schmidt, then the city’s senator of the interior, later Germany’s chancellor. In 2002, the leadership of the incumbent chancellor, Gerhard Schröder, during the flooding of the River Oder wrenched victory from the jaws of a widely expected defeat at the hands of the conservatives one month later.

At a time of national crisis, as the Greens know, parties in opposition can only wait in the wings while the executive bestrides flooded plains in wellington boots, and hope for their opponents to shrink rather than rise in the electorate’s estimation in the process.