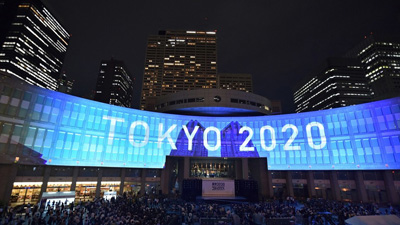 Robert Bridge is an American writer and journalist. He is the author of ‘Midnight in the American Empire,’ How Corporations and Their Political Servants are Destroying the American Dream. @Robert_Bridge

Thanks to Covid and some bizarre rule changes, Tokyo 2020 will be a sterile event sorely missing the vibrant international pulse we’re accustomed to. Sadly, this charade should have been canceled, not just postponed.

In what appears to be a last-ditch attempt at damage control, Thomas Bach, the International Olympic Committee (IOC) president, has called Tokyo the “best ever prepared” city to host the Olympics with just hours to go before the official lighting of the flame.

Unfortunately, few people will be able to put that statement to the test since spectators have been summarily banned from attending the event after Japan declared a state of emergency due to a spike in Covid cases. A mere handful of athletes have tested positive for the virus in the Olympic village. Will testing negative for Covid be included among the sporting events?

Joking aside, it should be remembered that the participation of athletes is just as crucial for a successful Olympics as the presence of spectators, the living witnesses to historic acts of glory.

Take a moment to reflect upon the most memorable part of the Games – the grand opening ceremony, when thousands of athletes parade into the stadium sporting costumes inspired by their national customs and cultures, with a throng of ecstatic spectators cheering them on.

Well, pack those memories away for another year, because they won’t be seen in Tokyo. Of course, the opening ceremony will take place, but that supercharged moment between athletes and spectators is set to be replaced by a general sense of disappointment and defeat that no TV engineer can hope to eradicate.

But not for lack of trying, of course. NBCUniversal plans to beam back some 7,000 hours of content from the Olympics, a feat that will force broadcasters “to grapple with whether viewers notice the difference [in the coverage] without spectators,” CNBC reported.

Of course, nobody will notice tens of thousands of missing fans! Perhaps to pull off this bit of stagecraft they’ll inject some ‘artificial blood’ into the background by way of cardboard fan cutouts, as the National Football League and Major League Baseball did last year, together with artificial sound in the broadcasts to “mimic crowd noise.” Or maybe NBC can call up Hollywood to inject some of its dazzling special effects into the production? Whatever tricks they employ, the sleight of hand will have to be damn good to keep consumers/spectators back home watching deserted stadiums as the lonely athletes adjust their shorts in preparation for some high jump, or javelin throw, or whatever.

After all, that’s what this major sporting event is all about, watching the best athletes on the planet compete on the field of dreams in fair competition. Yet, in addition to spectators, that’s another thing that will be sorely missed at the Games this year: fairness. That’s because the International Olympic Committee has taken the radical step of permitting New Zealand transgender athlete Laurel Hubbard, who was born a male, to compete among female weightlifters. This decision comes despite scientific evidence proving that natural born males enjoy distinct advantages over females when it comes to strength and speed, regardless of the scientific interventions.

This is Kuinini ‘Nini’ Manumua, the woman who was ultimately displaced by inclusion of Laurel Hubbard.She’s 21, and it would have been her first Olympics. pic.twitter.com/l8RH0q0njz

Proponents of the decision argue that transgender athletes can keep their testosterone levels artificially low enough to compete fairly alongside females. That theory appears to be in desperate need of further testing. According to one study, published in the prestigious British Journal of Sports Medicine, “transwomen still had a 9% faster mean run speed after the 1 year period of testosterone suppression that is recommended by World Athletics for inclusion in women’s events.”

Dr. Emma Hilton, a developmental biologist and university lecturer confirmed that “even five years past transition and their testes long gone [transwomen] retain more muscle mass and remain much stronger than reference females.” [Note: surgical removal of the testes is no longer required by the IOC as it once was, so long as male testosterone levels are kept within a certain threshold].

I am not sure how many fans have been turned off by the inclusion of Hubbard in the competition, but it convinced this jaded American to avoid the Olympics this year, and possibly forever. Personally, I would be in favor of creating a separate category of competition for transgender persons where the competitive rights of females are not infringed upon. But, of course, such a suggestion will trigger the ‘inclusive’ Left into a collective conniption fit. Incidentally, when it is considered that Russian athletes will not be able to compete under the Russian flag and anthem in Tokyo because of unnecessarily harsh punishments for doping charges, yet fully kitted males are now free to compete against females, then it is clear that something is out of whack inside of the IOC.

So, what happens in the event that Ms. Hubbard or some other Olympic star excels in competition? Like the games of Olympics past, these athletes will proceed to the podium where they will be awarded their gold, silver or bronze medals amid raised flags and blaring anthems. But this year, in keeping with the pervasive climate of fear that has infected every square inch of Planet Lockdown, social distancing regulations will prevent medal bearers from placing medals on the Olympians, who rank as some of the healthiest and fittest humans on Earth. What this means is that the champions will have to put their medals on themselves.

“They will be presented to the athlete on a tray, and then the athlete will take the medal him or herself,” IOC president Bach said. “It will be made sure that the person who will put the medal on [the] tray will do so only with disinfected gloves so that the athlete can be sure that nobody touched them before.”

It probably goes without saying that we won’t be seeing many photographs of winners taking playful bites out of their gold medals this year.

Amid this frigid climate of sterility devoid of humans and the human touch, it should come as no surprise that debunked rumors of ‘anti-sex beds’ for athletes residing in the Olympic village were readily believed.

Beds to be installed in Tokyo Olympic Village will be made of cardboard, this is aimed at avoiding intimacy among athletesBeds will be able to withstand the weight of a single person to avoid situations beyond sports.I see no problem for distance runners,even 4 of us can do😂 pic.twitter.com/J45wlxgtSo

One rumor that will not be debunked, however, is that the Tokyo Games, which have been postponed since last year, will rank as one of the greatest Olympic flops of all time. In ticket sales alone, Japan stands to lose around 800 million dollars, which is mere peanuts compared to the revenue that has been lost in the hotel, restaurant and service sectors. And let’s not even mention the refrigerator magnet and T-shirt business.

Perhaps the most ominous sign of impending disaster, however, came this week as Toyota, the major Japanese car producer, announced it will not air commercials during the Games, citing floundering support for the event among Japanese. I guess it’s possible that banning spectators and killing the festive atmosphere might just produce such an undesirable effect. Now it remains to be seen whether other fair-weather corporate sponsors, afraid of being associated with such an event, will also make a dash for the fire exits.

Personally, I’d love to have seen Tokyo welcome the international community to the Games with open arms, and even hugs, instead of effectively destroying it with excessive fears over a virus that enjoys a remarkably high survival rate.

In 490 BC, following the Battle of Marathon, the Greek soldier-courier Philippides is said to have run from Marathon to Athens to report the news of the Greek victory over Persia. He is said to have exclaimed, after an arduous run, “hail, we are the winners!” before collapsing and dying from sheer exhaustion. The physical feat was said to have been so astounding, covering some 80 kilometers (50 miles) in about a day, that the term ‘marathon’ is still used to this day to describe the Olympic race.

By comparison, can the world truly view itself as ‘winners’ at this point in the Games? Will our modern Olympic marathon contenders be forced to participate in a mask? Although things may eventually play out differently, the sense of heroism and courage that has defined sport throughout the ages appears to have been overshadowed by a shroud of fear and dare I say cowardice. It is a veil of defeat the ancient Greeks, the founders of the first Olympiad, would not have worn well.