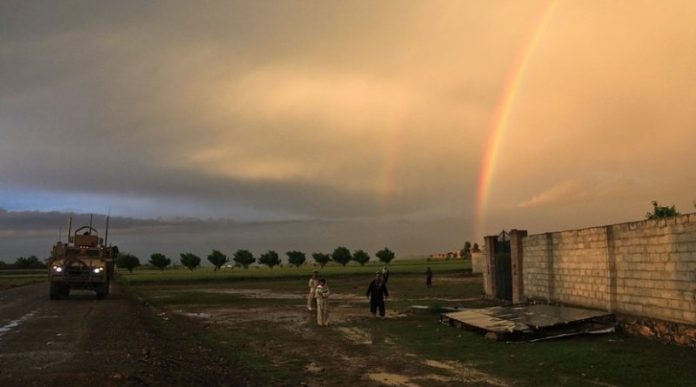 Over the past month, the crisis in Afghanistan has arrived at a critical juncture as the US pushed on with its planned withdrawal from the country to finally end a 20-year-long war. Kabul has, meanwhile, upped the ante against its neighbour Pakistan over Islamabad’s strong support for the Taliban, both at the negotiating table in Doha and on the battlefield.

Over the past week, President of Afghanistan, Ashraf Ghani, sparred with Pakistan’s Prime Minister Imran Khan while attending a conference in Tashkent, Uzbekistan, on expanding trade and connectivity between South and Central Asian states. As the war of words spread between the neighbours, two historically important countries around this conflict that were also attending the conference have curiously maintained a distance from these developments. The countries in question here are Saudi Arabia and the United Arab Emirates (UAE).

Both Riyadh and Abu Dhabi, who have had historical connections with Afghanistan and Pakistan alike, including with the Taliban, have maintained a relative distance from the negotiations that began in 2018 in Doha, Qatar. The UAE had maintained a small military presence in Afghanistan since 2003 on the sidelines of the post-9/11 US invasion and Washington DC’s larger ‘War on Terror’ narrative.

Saudi Arabia, meanwhile, was looking into Afghanistan from a strong theological lens, specifically from the perspective of Riyadh’s significant influence in Pakistan and attempts to expand the same into Afghanistan. In 2012, Saudi was looking to expand its funding of Islamic institutions in Afghanistan for a stronger footprint in the country as it stabilised under the US security umbrella. Historically, the Gulf region was a critical provider of both finances and human resources for the Mujahideen fighting in Afghanistan against the Soviet Union between 1980 and 1989, when Moscow finally withdrew back over the Amu Darya river. According to Pakistani journalist Ahmed Rashid in his book titled ‘Taliban’, the Saudis provided nearly “US $4 billion in aid to the Mujahideen between 1980 and 1990, which did not include unofficial aid from Islamic foundations, charities, private funds of Princes, and mosque collections.” Other scholars, such as Thomas Hegghammer, are more sceptical of such claims due to the lack of documentation and record keeping. However, beyond methodological roadblocks, Hegghammer does point towards the Saudi state giving subsidies on flight tickets meant for aid workers, a system also taken advantage of equally by those funded by private charities, mosques, and so on to join the Mujahideen ranks.

However, in 2021, things are very different in the Gulf. The missing narratives from Saudi Arabia, the UAE, and others in the region on Afghanistan come from certain fundamental shifts taking place in the Middle East that today preoccupy leaderships in Riyadh and Abu Dhabi. Over the past few years, the UAE has become a major financial hub in the region, attracting vast amounts of trade, business and investments from across the world, and it is positioning itself as the ‘Singapore of the Middle East.’ This shift has been critical for the UAE to pull itself away from being an economy dependent on oil and diversify its economic portfolio to prepare for a rapidly evolving global economy and political order. The successes achieved by the UAE in this field are now being aspired to by Saudi Arabia under the auspice of the often controversial king-in-waiting, Crown Prince Mohammed bin Salman (MbS), who has initiated fundamental, critical, and difficult reforms in the kingdom to diversify from being an exclusively oil-reliant economy.

The trajectory of ‘opening up’ for the likes of Saudi Arabia does not only involve economic liberalisation, but, perhaps, even more importantly social and theological reorientation as well. Such disturbances to traditional state structures do not sit well with its previous geopolitical postures towards the likes of the Mujahideen fighting in places such as Afghanistan, or even its relations with Pakistan, which have fundamentally changed since MbS became the de-facto leader in Riyadh.

To put this in perspective, the UAE under the leadership of Prince Mohammed bin Zayed, has taken an aggressive posture against the ideological expanse of the Muslim Brotherhood, a near century-old Islamic movement founded in Egypt by scholar and imam Hassan al-Banna. The UAE going against the conservative and often radical ideologies of the Brotherhood saw Abu Dhabi tacitly support a coup in Egypt in 2013 which unseated the Brotherhood-backed, electorally-elected government of Mohamed Morsi. In June 2017, both the UAE and Saudi Arabia orchestrated a blockade against their Gulf Cooperation Council (GCC) partner Qatar on the back of Doha’s support for the likes of the Muslim Brotherhood and what Riyadh and Abu Dhabi, in general, considered the Qatari leadership punching above its weight in regional affairs. This complicated the prospect of any significant role that Saudi or the UAE wished to play in and around the Afghan peace process, which officially began in Doha in 2018, pushed through by then US President Donald Trump.

The ideological shifts in the Gulf come laden with immense challenges to domestic security for these states. Saudi Arabia, perhaps, has the biggest domestic challenge relating to these changes, of maintaining peace as it ideologically attempts to reorient itself, risking pushback by the conservative section of society, which also includes a significant part of its youth.

For example, the only Al-Qaeda linked terror attack on US soil since 9/11 took place in December 2019 in Florida when a Saudi Air Force personnel, then 21-years old Mohammed Alshamrani, shot at 11 people at a base, killing three. This happened at a time when MbS had been moving Saudi towards a more moderate Islamic view, one that will be much more palatable globally. In May, Saudi Arabia ordered mosques to lower volume of loudspeakers and switch them off after the call to prayer was made. Rules regarding mandatory closing of shops and businesses during prayer time have been relaxed, and the infamous Saudi religious police, or the muttawa, has been reigned in, moving into an advisory role rather than one that admonishes people publicly for breaking religious etiquette.

These changes taking place in the Gulf’s power centres has put them at drastic contrast to the kind of support they were able to mobilise during the Afghan war against the Soviets. The subtle movements away from theocratic absolutism towards developing a more open economy means that traditional public opinion of states such as Saudi Arabia, seen by the outside as an ultra-conservative and regressive polity, will need to be overturned on its head if MbS’s vision of a more open and economically liberal state is to be realised. The UAE has to a large extent shown that it can be done successfully without ruffling too many feathers, all the while maintaining an Islamic system. The crisis emitting from a civil war in Afghanistan is a challenge on the domestic front for states such as Saudi Arabia. To maintain its image as an upcoming investment mecca, Riyadh will have to make sure it does not once again become home to mass migration of fighters flying in and out of the Afghanistan and Pakistan theatres or become a hub of funding enabling extremist activities.

On Afghanistan specifically, religious scholars from Saudi Arabia, Afghanistan, and Pakistan, under the framework of the Muslim World League (MWL), met in Mecca in June and labeled the violence in Afghanistan as ‘unjustified,’ saying the conflict waged by the Taliban “had no justification and couldn’t be called jihad.” Prior to the MWL meet, the Secretary General of the Organisation of Islamic Cooperation (OIC), Yousef Al-Outhaimeen, also had termed the Taliban-led violence as a “genocide against Muslims.” This posturing often led by Saudi Arabia is in tune with its refreshed goals.

Between Saudi Arabia’s plans to develop the world’s most futuristic city in Neom from scratch at a marketed cost of US $500 billion to the UAE hosting Expo 2020 in Dubai to expand its place in global trade, all-encompassing security and stability will have to become the new mantra. Significant strides to achieve this have already been made, with the signing of the Abraham Accords normalising relations between the UAE, Bahrain, and Israel on one side and Saudi Arabia and Iran holding intermittent talks to try and smoothen the biggest ideological and geopolitical crevasse in the region between the Shia and Sunni seats of power on the other. In the 90s, along with Pakistan, only Saudi Arabia and the UAE had officially recognised the Taliban government in Kabul. In 2021, history of the Afghanistan conundrum may have very limited room for manoeuvre in the Gulf.

The views expressed above belong to the author(s).