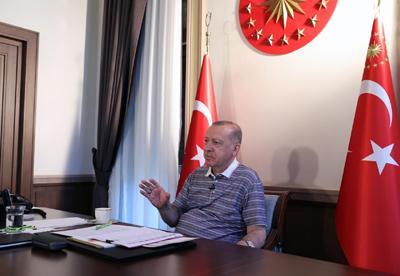 Ankara will continue its efforts to secure international recognition for the Turkish Republic of Northern Cyprus (TRNC), Turkey‘s president said on July 21.

“We will make every possible effort to ensure recognition of the Turkish Cypriot state as soon as possible,” President Recep Tayyip Erdoğan said in a video address to members of the Justice and Development Party (AKP) on the Muslim holiday of Eid al-Adha.

He stressed that the only demand of Turkish Cypriots in international talks on the Cyprus issue is for “their sovereign state status to be recognized,” a recognition currently only given by Turkey.

“All other offers and proposals are not valid anymore,” Erdoğan added.

The Turkish president returned from a two-day visit to the TRNC on July 20, where he reiterated Ankara’s support for a two-state solution to the Cyprus issue and the need for both sides of the island to be recognized as equals.

“No one should expect the Turkish Cypriots to give up their equal status and sovereignty, and to accept to live as a minority as per the will of the Greek Cypriots,” Erdoğan said at an event on the island, adding that the Turkish Cypriots would not compromise on their independence and freedom.

“First of all, the sovereign equality and equal status of the Turkish Cypriots should be confirmed. This is the key to the solution,” he said.

Later in the day, Erdoğan said any new Cyprus talks that fail to guarantee the vested rights of the island’s Turkish Cypriots are doomed to fail.

“The time has come for the negotiations to be conducted between two states, not between two communities,” Erdoğan told reporters en route from a visit to the Turkish Republic of Northern Cyprus (TRNC).

“For this reason, we’re determined not to bring third parties between us, and we cannot accept such a thing.”

Erdoğan stressed that the Turkish side opened a new page on the Cyprus issue without changing their constructive understanding.

Instead of sticking to parameters that have proved not to provide a solution on the island – seeking a federation of communities – Erdoğan said the Turkish side put forth a fair, sustainable, and realistic solution.

When asked if the Greek Cypriots could join NATO, Erdoğan said it cannot join the military alliance unless Turkey gives a “positive answer.”