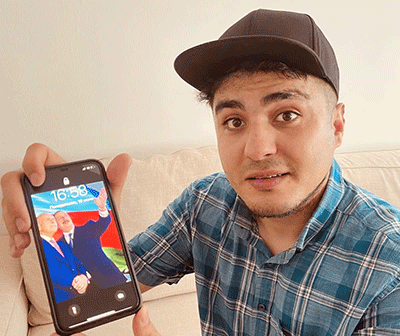 The list of journalists and activists reportedly spied on using the Israeli-made Pegasus software continues to grow. But Baku is keeping quiet.

Azerbaijani activist Mehman Huseynov, reportedly targeted by a massive phone-spying program, makes light of the situation with a Facebook post showing his phone with a photo of the current and former presidents of the country. (photo: Facebook, Mehman Huseynov)

The Azerbaijani authorities have remained virtually silent on an explosive report that the government has been spying on the phones of hundreds of journalists and opposition figures.

On July 18, Organized Crime and Corruption Reporting Project (OCCRP) published an investigation reporting that 50,000 phone numbers in 24 countries were accessed and spied on by their respective governments by means of an Israeli-made software named Pegasus.

Azerbaijan was one of the most prominent countries in the report, which found that the government has been spying on more than 1,000 journalists and opposition figures for two years. The report confirms and names 74 of them and says that the investigation is ongoing to determine the identities of the remaining ones.

The list includes many people long harassed and followed in Azerbaijan, most notably Khadija Ismayil, an investigative journalist who was blackmailed over sex tapes in 2012 and spent a year and a half in prison from 2014-6 because of her work. Young reporters also were targeted, such as 20-year-old Fatima Movlamli, who also has been targeted using hacked personal videos.

In its report, OCCRP says that while there is no evidence proving that the Azerbaijani government was a client of NSO Group, the Israeli company that sold the phone-spying software to governments around the world, the volume of cases involving Azerbaijanis suggests that it was.

Another journalist on the list, Sevinj Vagifqizi of Meydan TV, said that as part of the investigation, IT experts found the Pegasus software on her phone. She told RFE/RL that she intends to sue the government in Azerbaijani courts, and if that doesn’t bear fruit, will pursue the case at the European Court of Human Rights.

Many of the reported targets reported not being surprised that they were spied on, but concerned that others they have been in contact with could be compromised.

“Everyone doing political work in Azerbaijan is under the government’s watch,” said Bakhtiyar Hajiyev, an activist and former opposition candidate for parliament. “But this is a spying program, it turns on your phone camera and microphone when you’re with your family and friends, it’s an extreme violation of your private life,” he told Meydan TV.

On her Facebook page, Ismayil shared tips for cybersecurity that she had learned from her colleagues at the OCCRP, including “getting an additional phone only for calls, not using SIM cards, and limiting mobile internet use.”

Some took the report with some humor. Prominent activist Mehman Huseynov posted a photo on Facebook of himself with his phone, on the screen of which was a photo of President Ilham Aliyev and his father and predecessor, Heydar Aliyev.

“I don’t know about you but I’m not worried,” Huseynov wrote. “I and my phone have been reforming for a long time, we are on the right path. The national security service always protects me.”

Not only opposition figures were spied on: Several journalists known for their pro-government views appeared on the list as well, including Mirshahin Aghayev of REAL TV and Rauf Arifoghlu of Musavat.com. In an interview with BBC Azerbaijani, Arifoghlu called the report “a joke” and “absurd.”

“Half the people on the list are not worth listening to, especially for the government,” he said. “The list is either exaggerated or completely fake.”

The authorities themselves, meanwhile, have been relatively silent on the allegations, and journalists who have sought comment have for the most part failed. Only Elshad Hajiyev, the spokesperson for the Ministry of Interior Affairs, told RFE/RL that the publication was “baseless” and “fake,” adding that “the ministry is willing to investigate any allegations upon request.”

The OCCRP also reported that NSO Group, the Israeli company that created Pegasus, did not answer specific questions regarding Azerbaijan.

Heydar Isayev is a journalist based in Baku.