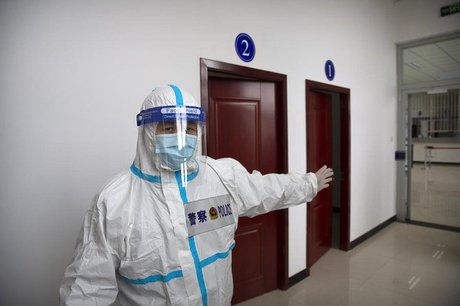 China on Thursday said a WHO proposal to audit Chinese labs as part of further investigation into the origins of the coronavirus pandemic showed “disrespect” and “arrogance towards science.”

Last week, the World Health Organization said a second stage of the international probe should include audits of Chinese labs, amid increasing pressure from the United States for an investigation into a biotech lab in Wuhan.

The proposal outlined by WHO chief Tedros Adhanom Ghebreyesus included “audits of relevant laboratories and research institutions operating in the area of the initial human cases identified in December 2019” — referring to the Chinese city of Wuhan.

But China’s vice health minister Zeng Yixin told reporters Thursday that he was “extremely surprised” by the plan, which he said showed “disrespect for common sense and arrogance towards science.”

Long derided as a right-wing conspiracy theory and vehemently rejected by Beijing, the idea that Covid-19 may have emerged from a lab leak has been gaining momentum.

Beijing has repeatedly insisted that a leak would have been “extremely unlikely,” citing the conclusion reached by a joint WHO-Chinese mission to Wuhan in January.

At the same time, Chinese officials and state media have pushed an alternate theory that the virus could have escaped from the U.S. military research lab at Fort Detrick, Maryland.

Nationalist tabloid Global Times said it had collected five million signatures from Chinese web users on a petition to investigate the U.S. lab.

Top officials have also amplified theories that the virus may have been imported with frozen food.

Yuan Zhiming, director of the National Biosafety Laboratory at the Wuhan Institute of Virology, told Thursday’s press conference “no pathogen leakage or staff infection accidents have occurred” since the lab opened in 2018.

Zeng hit back at what he called “rumors” about the lab, insisting that it had “never carried out gain-of-function research on coronaviruses, nor is there a so-called manmade virus.”

His comments were in reference to the type of research that has featured heavily in theories about a possible lab leak.

China has in recent days faced accusations from the WHO that it had not shared the necessary raw data during the first phase of the investigation, with Tedros urging Beijing to “be transparent, to be open and cooperate” on a second phase.

Tedros on Friday also called for more studies of animal markets in and around Wuhan.

The U.N l. health agency has been under intensifying pressure for a new, more in-depth investigation of how the disease that has killed more than four million people around the world first emerged.

The WHO was only able to send a team of independent, international experts to Wuhan in January, more than a year after Covid-19 first surfaced there, to help Chinese counterparts probe the pandemic’s origins.

Thursday’s comments come ahead of a weekend trip to China by U.S. Deputy Secretary of State Wendy Sherman to address deteriorating ties between the two countries.

It is the highest-level visit under President Joe Biden and comes amid tensions between the two powers over issues including the pandemic’s origins, human rights and cybersecurity.