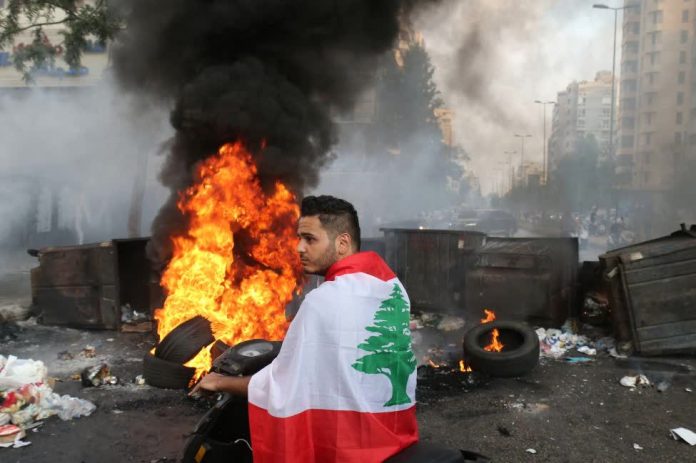 A Lebanese man drives as protesters block the roads with garbage bins and burning tires during protests after Lebanese Prime Minister-designate Saad Hariri stepped down, abandoning  his effort to form a new government, on July 15 in Beirut, Lebanon. Photo by Nabil Mounzer/EPA-EFE

BEIRUT, Lebanon, July 22 (UPI) — International pressure and threats to impose sanctions on Lebanese political leaders to force agreement on the formation of a new government to deliver reforms and save the country from crisis are leading nowhere.

After nine months of trying to form a new Cabinet, Prime Minister-designate Saad Hariri simply gave up. Hariri announced July 15 that he decided to step down shortly after President Michel Aoun rejected his new Cabinet line-up of 24 nonpartisan specialists. It was their first meeting in four months but their 20th since Hariri was named prime minister by a parliamentary majority last October.

The two leaders have been unable to agree, trading accusations and blaming each other for the continued obstruction in a fierce battle over prerogatives and who is to name the ministers. While Aoun is a close ally of Hezbollah and controls the largest Christian bloc in parliament, Hariri remains the top Sunni leader.

In line with the 1989 Taef accord that ended the 1975-90 civil war, the prime minister holds parliamentary consultations to form the Cabinet and co-sign with the president its formation decree.

Hariri argued in a post-resignation interview with New TV, a local TV network, that Aoun still wanted a blocking third, a veto power that would allow him and his son-in-law Gebran Bassil, who heads the Christian Free Patriotic Movement to control the Cabinet. Moreover, he said, the FPM would not give Cabinet confidence.

“Hariri’s resignation will complicate the crisis more and more. We are on a precipice and heading down to total chaos,” Amin Kammourieh, a journalist and an independent political analyst, told UPI.

Although Aoun decided to hold binding parliamentary consultations to appoint a new prime minister next Monday, it would be hard to find an acceptable Sunni personality to replace Hariri. Under Lebanon’s political system, the president should be a Christian Maronite, the prime minister a Muslim Sunni and the House speaker a Muslim Shiite.

“An agreement over a new prime minister is expected to take a long time, and most probably the political leaders won’t be able to name anyone,” Kammourieh said. “Hariri stepped down. I wish all the others do the same…There is no salvation or solution unless they all leave.”

Even if they are able to pick a new prime minister, forming a new Cabinet is not guaranteed, taking into consideration Aoun’s demands and the fact that Hezbollah is in no hurry, awaiting the outcome of the U.S.-Iran nuclear talks.

Hariri’s resignation came as a disappointment to many international players who have been urging the Lebanese leaders to swiftly form a new Cabinet and start implementing reforms as a prerequisite to unblock financial assistance and prevent the country’s total collapse. All such calls, mainly by the European Union led by France, the United States, the United Nations, the World Bank and some Arab countries, have been unheeded.

According to the latest World Bank Lebanon Economic Monitor released last month, Lebanon’s economic crisis is likely to rank in the top 10, possibly top 3, most severe crises globally since the mid-19th century.

It cited “colossal challenges, continuous policy inaction and the absence of a fully functioning executive authority” that are further threatening dire socio-economic conditions and a fragile social peace “with no clear turning point in the horizon.”

The Lebanese people, who are battling hunger and deep poverty after their national currency lost more than 90 percent of its value, do not have the luxury of time.

The international community has been showing solidarity with Lebanon, providing life-saving aid delivered directly to the population and maintaining pressure on the ruling political class.

But their efforts, including two visits by French President Emmanuel Macron over the past year, have failed to change the top leaders’ positions.

“There are many pressures being exerted on Lebanon, but there is no joint effort,” Joseph Bahout, director of the Issam Fares Institute for Public Policy and International Affairs at the American University of Beirut, told UPI. “The French are pressuring to have a government, the Americans are pushing, but they don’t want Hezbollah in the Cabinet, while the leaders in the Gulf don’t care if Hariri succeeds or not in forming a new Cabinet. Not all are focusing on the same thing.”

Moreover, Bahout said that despite the dramatic situation in the country, the U.N. Security Council fell short of “recognizing that Lebanon is in a crisis that necessitates joint effort or a resolution.”

“We are on hold, on an artificial respirator, waiting for many things, internally and regionally, to come together so we can have a kind of a solution, not a solution,” he said. “It is scary and sad.”

It is unclear whether the new French-U.S. rapprochement over Lebanon, that started with a visit of U.S. Secretary of State Antony Blinken to Paris last month and the subsequent talks held by the French and U.S. ambassadors to Lebanon with the Saudi officials in Riyadh will result in a more coordinated and unified strategy.

“They are trying everything they can to avoid collapse because such a collapse will harm their own interests,” a former Lebanese diplomat told UPI on condition of anonymity. “They will keep on trying but seems there is no solution.”

In an interview with Al Hurra TV this week, U.S. acting Assistant Secretary of State for Near Eastern Affairs Joey Hood said the United States was working on unifying international efforts in “what could be called an alliance” not only to offer incentives but also to continue exerting pressure on the Lebanese officials.

The EU is close to targeting Lebanese officials accused of corruption with sanctions, travel bans and asset freezes.

Foreign ministers from the EU’s 27 member states, who met in Brussels on July 12, agreed to set up a sanctions regime for Lebanon, hoping that its legal framework will be completed by the end of July. It wasn’t clear when the measure could be implemented.

“We have been hearing of the European sanctions for four months and still nothing,” Bahout said. He questions what “tools” the international players will use to force the general elections scheduled for next spring, which are expected to bring new faces from the civil society, who revolted against the corrupt political class in October 2019, to the parliament.

Last year, Bassil and two former ministers, Youssef Fenianos and Ali Hassan Khalil, were hit by U.S. sanctions for engaging in corruption and making political and economic favors to Hezbollah.

However, the EU sanctions could be more “painful” to the corrupt politicians than the U.S. ones, according to the Lebanese diplomat.

“The Lebanese politicians travel more to Europe, where they have their money, properties and luxurious yachts,” he said.

Until then, Lebanese political leaders are likely to continue business as usual, waiting for a U.S.-Iran settlement, Iran-Saudi new understanding, a solution to the crisis in neighboring Syria and eventually a new regional order.

Fadia Kiwan, director general of the Arab Women Organization and a political science professor, said there should be “a kind of truce and an understanding over a transition phase” with a government that could prepare for the upcoming parliamentary elections, contain the economic crisis, stop the dramatic deterioration in living conditions and curb the uncontrollable U.S. dollar’s rise.

“It is not the time for big solutions but for short-term solutions to minimize the damage,” Kiwan, who was named foreign minister in Hariri’s last Cabinet line-up rejected by Aoun, told UPI.