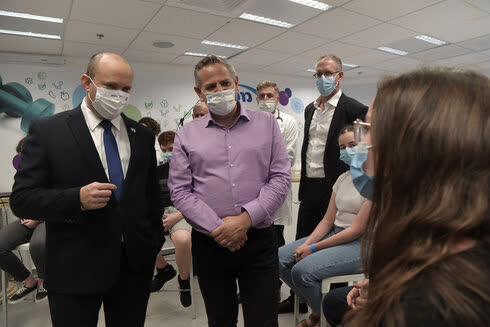 Opinion: In this time of uncertainty, our leaders should not be taking great risks either with all-out closure or by refusing any mitigation measures at all; but we seem to be stuck in stasis and barely anything is being done to address the spiraling COVID spread – and that is very risky indeed

With the coronavirus making a massive reappearance in the country, Israel finds itself deep within the realm of uncertainty, doubt and conflicting information.

From the start of the epidemic, there has been no such confusion among the experts themselves, who are torn between the latest data dump from the Health Ministry, data in the field, data from the nation’s hospitals, and divergent information coming in from the UK.

On Tuesday, Ynet reported that the team for handling pandemics was given disturbing data on the possibility of a significant reduction in the vaccines’ ability to protect from infection and serious illness, and that the director-general of the Health Ministry would convene a special debate on the issue out of deep concern over this new information.

At the same time, however, a series of academics tried unsuccessfully to reproduce the results of the Health Ministry analysis and (thankfully!) produced data showing much higher efficacy for the vaccines.

Are we seeing a decline in vaccine efficacy due to the passage of time from the vaccination date, is it the strength of the Delta strain (whose viral load is hundreds of times higher than previous strains) or is it actually statistical noise?

Furthermore, is this an increase in cases that do not present the risk of an inpatient crisis, serious illness and of course a high number of dead, as in the previous waves?

Analysts are having a hard time deciphering a trend on this, simply because the margin of error is still so large.

One thing is quite clear: in this situation of widespread uncertainty one should not take great risks. A major risk would be the closure of the economy or large parts of it while the data is still unclear and when 85% of adults in Israel are vaccinated. Indeed, no one is proposing such a closure.

But an equally large risk would be to continue with the economy fully open and without any precautions, given that the infection rate is so high and initial analysis points to the danger of vaccine resistance.

And what is the government doing? It did not want to risk financial and moral harm, so it became addicted to the second risk – leaving the economy untouched with no new restrictions.

We keep hearing the same refrain from the coronavirus cabinet: “We have time, it’s too early.”

They will keep saying that it’s too soon to take such a step up until the moment it’s too late.

Given the above state of affairs, the experts agree: we cannot let the disease just keep spreading among us, for the price would have to be would be very high indeed.

Yet the Bennett-Lapid government now seems inclined not to do too much on the reintroduction of restrictions, if at all.

Take Ben-Gurion Airport for example. In the month of July alone, 1 in 10 cases detected in Israel was someone who had returned from abroad. That’s a sizeable amount.

Their contribution to the infection rate in Israel is considerable, and the solution is obvious: either we quell the desire for foreign travel or make all returnees from abroad go into isolation for a defined period (the current options are four days or seven days).

So far, so good. But this is where the Israeli government comes into the picture. Despite the massive increase in COVID-19 cases and despite the rather spectacular data on the contribution of returnees from abroad to the spread of the disease, the government is either unable or unwilling to impose more stringent quarantine regulations.

And even if Prime Minister Naftali Bennett himself was in favor of such a step, it is doubtful that it would win majority support in the coronavirus cabinet.

Certainly, many ministers have been occupied in recent days with the increase in cases and in seriously ill patients, but in reality, apart from these consultations, the government is not doing anything substantial.

It has decided to introduce the “Revelry Pass,” which everyone knows is unenforceable, and that’s more or less it.

At the start of the pandemic, the director of the World Health Organization’s response to the pandemic, Dr. Mike Ryan, directly addressed decision makers around the world.

(Dr. Mike Ryan addressing the need for a speedy response to coronavirus, March 2020 )

“Perfection is the enemy of the good when it comes to emergency management,” he said.

The new government should print this out and hang up it in clear view. Because right now Israel’s ministers are paralyzed – and the clock is ticking.