80 Proposals in 8 Chapters for a Strong Economy, Stable Rule of Law and Advanced Democracy

Based on their firm conviction that permanently increasing prosperity in Turkey is possible through a stronger rule of law, and that the greatest responsibility in this regard lies with the judiciary, the Better Justice Association has shared a comprehensive document consisting of 80 proposals with the public. The Better Justice Association is a politically neutral non-governmental think tank founded to identify problems in the Turkish judicial system and to design solutions grounded in core principles such as the rule of law, independent judiciary, transparency and accountability of legal institutions and to raise informed social debate with the aim of reaching social consensus.

Better Justice Association’s President Mehmet Gün said: “We find it promising that President Erdoğan has said that the necessary actions will be taken to address the issues of Economy, Law and Democracy. We are also encouraged that government ministries have sought the opinions of Turkish businesses. This signals a valuable window of opportunity for radical solutions to the most important issue facing our country: improving the judiciary. As a contribution to substantially reforming the rule of law and democracy, which we hope will in turn strengthen our country’s economy, we have formulated 80 concrete proposals, organised into 8 chapters, and have already presented them for the attention of Mr. Lütfi Elvan, the Minister for Treasury and Finance and of Mr. Abdülhamit Gül, the Minister of Justice, and have also shared them with the public. We would like to emphasize that we will continue to work to promote these important reforms and we are ready to play our part in helping our country become an advanced democracy through a stronger rule of law, and increase its prosperity to a level currently enjoyed by the most prosperous nations in the world.”

“We think, however, that these proposals should be implemented within a reasonable framework and in order of priority. Precedence should be given to the proposals concerning the rule of law. The judiciary must be fit for purpose, by which we mean that it must be efficient, transparent and accountable and more focused on protecting fundamental rights and freedoms. By making these improvements, more people will trust judicial institutions and services, and the judiciary in turn will be able to add greater value to society, and deserve full independence and self-governance. When this is done, while our economic success will increase, our country’s democracy will also become stronger and function more effectively.”

The reform package of the Better Justice Association, consisting of 80 proposals, were collected under the following 8 chapters (All recommendations can be accessed on the website http://www.dahaiyiyargi.org/ )

1) Creating value by delivering high quality judicial services is the obligation of the judiciary. Without delivering this, it cannot claim legitimacy. Therefore, the courts and their adjudication procedures need to be improved by ensuring that they function efficiently and deliver their services to a high standard.

For this purpose: A National Disputes Database should be created and each dispute must be given a unique number, similar to an IBAN; courts’ expertise must be concentrated in the centres of 26 development zones; judicial preparatory courts should be established to both improve the preparation of cases and bring the delivery of judicial services to the public’s doorstep; 90% of the burden of trials should be taken off the judges and transferred to the advocates (attorneys at laws) who make up almost 90% of the jurists in the country; cases must be finalised within 3-5 months at a single hearing and the judiciary must fully embrace the benefits that technology can bring, including creating a “platform for Turkish legal artificial intelligence”.

2) All issues adversely affecting freedom of expression, and therefore also the climate for innovation and the public’s confidence in the rule of law, must be eliminated.

3) Courts must use experts solely where they can offer relevant insight from their academic or professional field. The judiciary should be prevented from using court appointed experts as if they are judicial assistants. The distortion that the corrupt court appointed expert system at present must be immediately eliminated from the judiciary. Courts should only maintain a ledger of experts, thus making them truly accountable.

4) All judicial organs and individuals – including The Council for Judges and Prosecutors, the Court of Cassation, and The State Council – must be made fully transparent, held truly accountable and assessed on merit. Any and all acts or decisions concerning their appointment, performance review, promotion, designation and disciplinary matters must be made open to judicial review. For this review, a specialised court with bespoke and swift procedures must be established and have jurisdiction to try all individuals employed by or involved in the judiciary. The regulation and practice of concealing the appeal review reports of the reporting judges in the Court of Cassation should be abolished, thus by ensuring full transparency and true accountability the public’s confidence in the justice system should be strengthened.

5) A General Administration Procedural Law must be enacted to define how politicians and other government employees should use their authority and to make public administration more compliant with the law. To make public servants more accountable to the law and equal with the ordinary members of the public before the law, Article 129 of the Constitution and the Law 4483 and the requirement for their superior’s permission to prosecute public servants must be abolished.

6) The public’s right to participate in and have a say in the governance of state affairs should be improved. To this end, the delegate system in the political parties and public professional associations should be abolished; block list practices in elections should be prevented; the discretion of leaders and central management to select candidates should be limited to 10%; political party candidates for single person positions should be determined through two round elections; and the resolution of the Supreme Election Council should be made subject to judicial review by the Constitutional Court.

7) All organs and elements of the judiciary should be strengthened to become fully independent, capable of robust self-governance and of preserving its own independence, as well as able to improve the performance of its members. Public professional associations for legal professionals should be regulated as judicial professional associations within the judicial chapter of the Constitution. Managers and governance organs must be democratically appointed solely by the members of the profession. A regulatory institution should be established to oversee the supply of judicial services in accordance with the needs, preferences, and priorities of society. It should have a sufficient number of members with the skills needed for it to function properly, appointed by all stakeholders of the judiciary fairly representing the whole of society. The composition and total number of its members should ensure that it cannot be influenced by any group of coalitions. Duties and authorities performed by the Ministry of Justice and the Council for Judges and Prosecutors should be transferred to this institution.

8) For the making of a new and civil constitution that Turkey needs a specific framework law must be passed, setting out the methodology for establishing a new constitution; creating the procedures needed to determine the public’s preferences fairly; the secretariat; and operational procedures so that the long-term efforts are not interrupted and do not go to waste. Constitution is the most basic societal agreement ensuring compromise, tolerance, and peace in society. For this reason, work towards creating a constitution should commence only after public confidence in the rule of law, especially in the freedom of expression is strengthened significantly, in other words, after the environment and conditions for building a constitution have matured. Making a constitution cannot be the result of an initiative of a person or one group. It needs to be a nationwide undertaking and resolution.

Noting that democracy essentially means the rule of law and advances beyond the foundation of law, Mehmet Gün highlighted the special relationship between democracy and the economy; democracy, on the one hand, reinforces confidence in the rule of law, and on the other hand, enables the actors of the economy to produce goods and services at the highest level. “Therefore, the rule of law produces a levelling effect, directly and indirectly, through democracy in the production of goods and services. The importance of this relationship can be witnessed by examining the course of democracy and the rule of law and national income levels over a number of years, both around the world and in Turkey; it is impossible to overlook the importance of this relationship.” 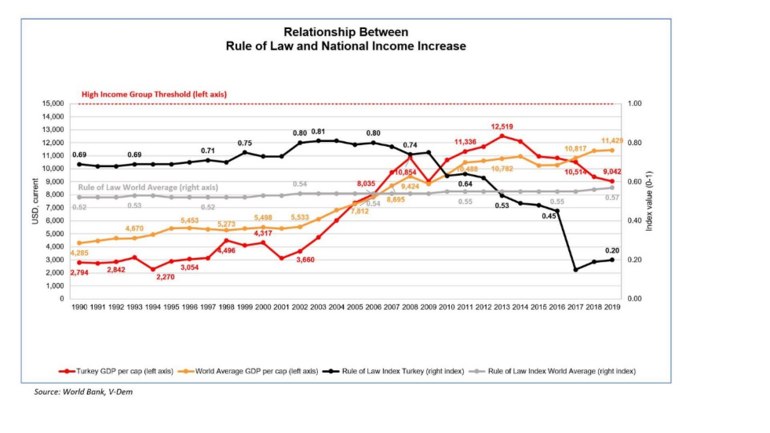 Recalling that the combination of the statements made by the executive concerning the judicial process at the time of Pastor Brunson trial and the repeated postponement of the trial caused the 2018 economic crisis; Mehmet Gün noted that the extraordinary decrease in the value of the lira alone caused our country to lose 57 billion TL (11 billion USD) in the 3-month period between August 2018 and October 2018, due to imports.

“As I’m sure the public will appreciate, improvements to the rule of law and democracy, which will in turn improve the economy, will require long-term work, patience and resolve, as well as radical and innovative solutions instead of relying on outdated methods. This will require all the relevant stakeholders to engage with the issues and be included in discussions. Their views must all be fairly evaluated, and the participation of civil society groups should be encouraged and a proper process must be put in place to ensure that the groups receive feedback on their input, regardless of whether or not their ideas are adopted. In this respect, we think that it will be beneficial to establish a relatively small taskforce that can work efficiently to appraise and evaluate all the suggestions submitted to the relevant ministries during this process. We think it would be beneficial if this working team is resourced with expertise from both ministries and has easy access to political officials. Our team working on reform within our association is ready to work with the teams or commissions formed by the ministries to assist in this process.”