The ongoing military operation in Syria’s north by the Turkish military may speed up the return of Syrian migrants in Turkey to their home country, according to the mayor of Gaziantep, a Turkish province of the Syrian border that is now home to hundreds of thousands of Syrians.

“When the Euphrates Shield started, as soon as the region became secure, people began to return [to their homelands],” Gaziantep Mayor Fatma Şahin has told the Hürriyet Daily News recently, referring to a military operation by Turkey in 2016 that cleared off Islamic State of Iraq and the Levant (ISIL) militants around Syria’s Jarablus.

“Currently, we are very hopeful for Afrin. Looking at the experience in Jarabulus and al-Bab, we have seen that a lot of Syrians are waiting to go back to their homelands,” Şahin added.

Gaziantep is in the midst of a new promotion campaign to attract more tourists to the city, yet a new military operation has started in its vicinity. How has the city been affected by the military developments?

This process has started with Operation Euphrates Shield. Our people were very happy when the Euphrates Shield operation had started. When Syrians had fled their homes for their lives, terrorist organizations like Daesh (the Arabic acronym for the Islamic State of Iraq and the Levant), the PKK (outlawed Kurdistan Workers’ Party) and the PYD (Syrian Kurdish Democratic Union Party) had started to settle in the lands they had left behind. In turn, that created serious security problems for us. There was a need for a stability corridor; a secure area cleansed from a terrorist organization for the peace of this region. When the Euphrates Shield started, as soon as the region became secure, people began to return (to their homelands). The population of Jarabulus went up from 3,000 to 50,000. The population in al-Bab increased to 100,000. Those who fled to save their lives preferred to go back to their homeland once they felt safe.

Currently, we are very hopeful for Afrin. This corridor needs to be fully established. Looking at the experience in Jarabulus and al-Bab, we have seen that a lot of Syrians are waiting to go back to their homelands. This is very important for us because it has been seven years of tremendous sacrifice. Seven years have put big burden on Turkey.

The statements from Ankara have suggested the operation will continue until all Syrians return. But we had just come to the point of accepting that Syrians are here to stay. Is it realistic to think that all will return?

We have plan A, plan B and plan C. We have to create the conditions for their return as well as take the necessary measures in case they will not return. We are working for all options.

What are your expectations in terms of the likelihood of those who would like to go back?

Have they said they are ready to return?

Everyone is waiting but the conditions (for return) need to come around. Once the conditions have been met, there will be a very speedy return. It has taken 15 days to return to Jarabulus. In only 15 days, the population of Jarabulus increased to 50,000.

But we have provided our support for the conditions to be ripe, from providing water and electricity, to repairing schools. We have worked a lot as a municipality, as a result of which, there has been speedier return.

Tell us about how the city handled the refugee issue.

Gaziantep’s population is 2,000,000 and there are 500,000 Syrians. First, we had an emergency action plan. We tried to address their fundamental needs without jeopardizing the living quality of our people. But as we realized the region will not regain stability in a short time, we started midterm planning. We strengthened the institutional capacity and established a department in the municipality, the first of such in a municipality in Turkey. We then carried out a thorough screening of each home to find out who they are, what their needs are, what their education level is and what profession they are in. In light of the results of this study, we realized there were 100,000 children below 18. They will become a lost generation and might be recruited by terrorist organizations if left untouched. When I started as a mayor, 3,000 children had been enrolled in schools.

We went to the Ministry of Education, we made amendments to the decree and thus, opened our schools to Syrian children. Currently, school enrollment for primary education is around 90 percent.

Second, we have included Syrians in the health care system. Greater municipalities in Turkey did not have schools or hospitals; whereas we have a school and a hospital. We thought employment is important. We asked for a new decree from the Labor Ministry to employ Syrians.

Have I understood correctly: Some of the steps that have been taken at the governmental level have come as a result of your initiatives?

We went to Ankara. Due to my former experience as a minister and my connections, we were able to explain the problems and talk about solutions.

In addition, with our initiatives in employment, the issue of social integration and harmony have come next. Whatever activity we had undertaken as a municipality, we made it available to the Syrians. If we provided professional training courses, we made it available to Syrian women too. If we provided day care support, we included Syrian children too. We had to work on the concept of living together to prevent them from becoming ghettos. We set up a consultation center to give them guidance on what they need to know to live in this city. After all, there were cultural differences. We encouraged them to learn Turkish and we made Turkish courses available.

When it comes to our own people, when there had been speedy arrivals (of Syrians), there had been an increase in the demand for housing. As the demand exceeded the supply, rents went up, water shortages started. We told our people to be patient and that we are building a huge dam. We started a housing project for 50,000 with the Housing Development Administration of Turkey (TOKİ).

In other words, we had dual management. We told our people to be patient; that on the one hand, we are investing in new projects while on the other hand, that they (the Syrians) are starting to return.

And to the Syrians, we provided them with guidance on life here.

But certainly, people must be complaining about the fact that while in the past, three children used to sit at one desk in school, now four of them have share; or when they used to wait half an hour at the hospitals, they now have to wait one hour.

That’s why we are building bigger hospitals and schools.

But how do you find the funding?

Some of it comes from the United Nations. The EU’s funds have not come as quick as we had hoped. We have made use of Japan International Cooperation Agency (JICA). We have used funds from Kuwait. Wherever there are funds available, we have worked to get them here to our city.

We have tried to manage this problem with the least damage possible. We have approached this issue not by constantly crying and complaining but by turning it into an opportunity.

Have you been able to turn it into an opportunity?

We have very strong trade and industry chambers. There are 900 Turkish-Syrian companies. Sixty to 70 industrialists who work closely with Syrians are registered in the (Gaziantep) Chamber of Industry.

That means a big human capital with people who know English and Arabic, creating an important opportunity for international trade.

You want to lure tourists but only a few years ago, Gaziantep suffered a lot due to terrorist activities that harmed its image as a safe city.

We were tremendously unhappy about it during that period. And there has also been a disinformation campaign against us. But all this had been reversed with the Euphrates Shield operation.

We have constructed a big security wall equipped with modern technology, have taken border passages under control and have carried out inside operations against terrorists. Very serious measures have been taken. Currently, the risk the city harbors is no different than any other city in Europe or the United States. Last year, we hosted one million tourists. Some 3.5 million people visited the zoo.

What makes Gaziantep attractive to tourists?

We say it is time to come to Gaziantep. It is home to five big civilizations, from the Romans to the Ottomans. It is a historical city. With 500 different dishes, it has tremendous potential for culinary tourism. We have started a project with the EU and set up an Anatolian Archeology Institute in the city.

WHO IS FATMA ŞAHİN 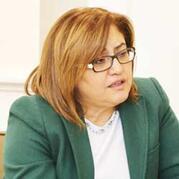 Fatma Şahin was born in the southeastern province of Gaziantep in 1966. After finishing high school in Gaziantep she studied at the Istanbul Technical University’s Chemistry and Metallurgy Faculty. Following her graduation from the university she worked in the private sector for 18 years.

Şahin in 2001 became a founding member of the ruling Justice and Development Party’s (AKP) provincial chapter of Gaziantep and was elected into parliament in the 2002 general elections. She represented Gaziantep in the 22nd, 23rd and 24th parliamentary terms.

In 2007 she was elected to head the women’s branch of the AKP.

Şahin became the family and social policies minister in the 61st cabinet in 2011. She resigned from the ministry in 2013 to become a mayoral candidate for the Municipality of Gaziantep. She won the elections on March 30, 2014 with 54.7 of the votes and became one of the first women to head a provincial municipality.