There had been a positive change in gold sentiment in 2019, particularly so in the second quarter, supported by renewed global economic and political uncertainties, an escalation of a trade dispute between the United States and China, falling inflation expectations and, importantly, a shift in the mood among the world’s key central banks towards looser monetary policy. Indeed, the ECB extended its pledge to keep interest rates at record lows until the middle of 2020 and signalled a possibility of a fresh stimulus and even rate cuts if the economic slowdown and weak inflation persist. Likewise, the U.S. Fed expressed its openness to easing, with growing market expectations that the rate cut will take place at the next Committee meeting at the end of July. The gold price recorded a strong rally in June, appreciating by 9% since end-May and hovering around a six-year high by the end of the second quarter. That said, when compared on a year-on-year basis, it was down by 1% in the first half of the year due to a relatively strong performance in the first quarter of 2018.

Looking at professional investor activity, CFTC figures demonstrate some interesting shifts in gold sentiment; net managed money positions switched from two consecutive weeks of net shorts in the second half of April to a net long of 714 tonnes by the end of June. The outright longs went from 285 tonnes in late April to 795 tonnes at end-June, the highest level since September 2017, while the outright short plunged by 85% during this period to just 54 tonnes, the level last seen in February 2018. There is therefore plenty of scope for long liquidation, which leaves gold in a vulnerable position if the Fed fails to deliver a rate cut and adheres to a “wait-and-see” mode for a longer period. ETF investors had also been warming up to gold, adding 32 and 69 tonnes of gold to their holdings in the first and second quarters respectively, representing a net dollar inflow of $4.2bn for the six-month period.

Retail investment, which is the sum of physical bar investment and all coins, slipped by 1% year-on-year in the first half of 2019, with a drop in bar demand offsetting higher coin offtake.

Physical bar investment dropped by 4% to 364 tonnes. It is interesting to note that demand in China and India, which together account for 40% of the global total, remained stable in the first half of the year. In the case of China, a strong start to the year was followed by months of moribund demand due to a remarkable performance in the domestic stock market. India, on the other hand, saw lower offtake in the first quarter, before sales improved in the second quarter on rising marriage and festival demand. Excluding these two countries, gold bar demand in the rest of the world fell by 6%. Strong equity markets performance and the gold price rally, particularly in May-June, saw European investors liquidating some of their gold assets to lock in profits, most prominently in Germany and Switzerland, which combined represent 15% of global bar demand.

Coin fabrication rose by 4% to 98 tonnes, led by strong gains in Africa and Asia, partly offset by weaker demand in Europe and North America. Demand for medals & imitation coins jumped by 11% to 41 tonnes, driven by strong offtake in India.

Jewellery fabrication slipped by 3% in the first six months, with losses recorded by all the major regions, with the exception of South America. Chinese offtake was down by 5% as the economic uncertainty put pressure on consumer spending, while this was partially offset by a 2% rise in Indian jewellery demand. Jewellery demand in Europe posted the largest drop of 13%, as long-term structural factors, along with slowing economic growth and higher gold prices weighed on consumption.

Central bank purchases rose by 39% to 260 tonnes in the first two quarters; Russia remained the largest single buyer of gold for the fourth year in a row, while China reported an increase of 64 tonnes in official gold holdings since January, compared to zero in the same period last year.

Global mine production rose by 51 tonnes or 7% year-on-year in the first quarter of 2019. The largest increase was posted in Oceania and Europe, which increased their combined production by 28 tonnes. The biggest losses were reported in Indonesia and Burkina Faso, mainly following lower grades and lower throughput at Grasberg mine, while the transition to underground mine continues. We estimate production in Q2 will reach 829 tonnes, representing a 2% rise from last year.

The global producer hedge book contracted by 25 tonnes on a delta-adjusted basis. Most of the hedging activity currently is being undertaken by Australian-based companies, which are trying to secure high gold prices in local currency, after the depreciation of the Australian dollar. According to our estimations, 30 companies took a net de-hedging position, while only ten increased the size of their hedge book.

Price Outlook: We expect gold to average $1,350/oz in 2019, with a possibility to test and move beyond $1,500/oz later in the year, particularly should we see further escalation of global economic concerns and major central banks reverting to monetary policy easing. That said, if the Fed fails to deliver a rate cut at the July FOMC meeting and leaves its policy unchanged for a longer period, there could be a swift change to a stronger dollar and a sharp drop in the gold price, particularly given the current speculative positioning. While economic uncertainty may hurt gold demand in China, a convincing recovery in the gold price will likely attract investors. Meanwhile, Indian gold consumption will depend on the current monsoon progression, although elevated gold prices may keep demand in check. 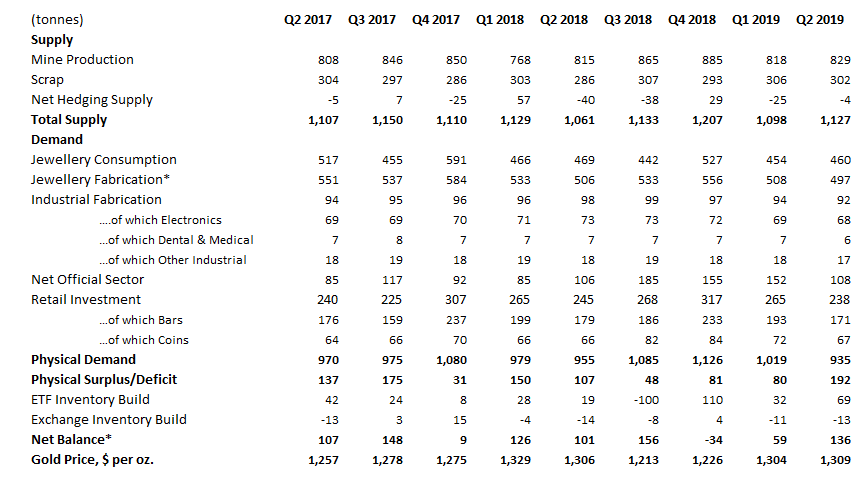 Source: GFMS, Refinitiv; *Jewellery Fabrication is used in the collation of the Physical Surplus / Deficit and Net Balance
Totals may not add due to independent rounding.  Net producer hedging is the change in the physical market impact of mining companies’ gold loans, forwards and options positions.

To see a copy of the report, arrange an interview with our analysts, or if you have any questions, please contact: