As the pandemic takes its toll across the globe, refugees and asylum seekers, who were already in a fragile position, deal with the crisis in much more difficulty, according to the World Food Programme (WFP) representative for Turkey.

In an interview with Hürriyet Daily News, Nils Grede said that as much as the pandemic is a health crisis, it has also become an “economic crisis.”

“Refugees, like in any society, tend to live close to the poverty line, just beneath or above it. They are very vulnerable to any economic shocks. The refugees are always among the first as the poor population, at the bottom of the social pyramid that get affected by any such crisis,” he said.

“Now with the coronavirus, in Turkey refugees are very well cared for due to the collaboration between Turkey and other countries, such as the EU,” he said.

With the beginning of the brutal war in Syria nine and a half years ago, Turkey began to host many refugees and asylum seekers, and today the country ranks first with the 4 million refugees it houses.

Even though the refugees in Turkey are being well-cared for, this does not mean that they are “wealthy,” according to Grede.“They still live a precarious life,” he added.

Underlining the economic impact of the pandemic, Grede said that although tens and thousands of refugees obtained work permits in Turkey, many of them work in the informal market.

“Most of the refugees depend on informal labor. In the informal market, the wages are lower. You do not have social security, you do not contribute to the pension scheme; so, it’s a lot more precarious,” he said. 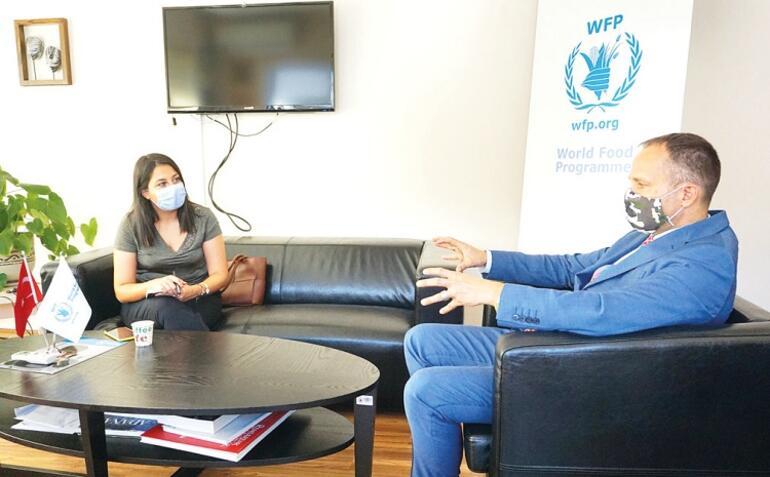 Grede also said that while some refugees have reliable jobs, some are trying to earn money to make ends meet with day or seasonal labor.

Grede conveyed that in the summer of 2018, with the fluctuating exchange rates, refugees were impacted “significantly” because it led to them losing their jobs in the informal market.

“What happened with the COVID-19 is a lot worse. Because, given that the economy shut down for several months, that informal labor market disappeared to some extent. So, the income that many refugees were partially or fully relying on disappeared,” he said.

Grede also said with the pandemic and its economic impact of refugees, people start to engage in “negative coping behaviors.”

Elaborating these behaviors as incurring debt, selling assets to buy food, taking children out of school so they can “beg or generate income,” Grede said that these behaviors tend to go up as the economic situation of refugees deteriorate.

Before the pandemic, the WFP had several projects to assist refugees in Turkey yet with the outbreak, it also started to adapt to the changed circumstances.

The WFP piloted a project last year called the “Kitchen of Hope,” or “Mutfakta Umut Var” in Turkish. The project is a culinary training programme, currently being carried out in nine cities. The project consists of three months of vocational training and three months of on-the-job training, which initially targets the participants to become assistant chefs.

However, with the pandemic, the Kitchen of Hope was also impacted.

According to the WFP representative, with the pandemic, many of the industries in which refugees work in have been “quite affected.”

Turkey banned layoffs in April, shut borders and intercity travel since the beginning of the outbreak and adopted a partial lockdown until June.

Nevertheless, with the closure of the service and tourism sectors until summer, many members of the poorest households were left without jobs, and these include refugees as well.

When virus measures were increased around April, “restaurants and hotels basically had to close because of the virus [and] of course we were concerned,” Grede said.

“Due to the COVID-19, we added one more program. We interacted with soup kitchens that are often run by municipalities and prepare food for the poor, the Turks usually, not the refugees,” he said.

“And we realized that was a quit food win-win situation by associating our participants with soup kitchens in different cities, so that they could actually do their work [with] internships at the soup kitchens,” he added.

Grede also said that with the pandemic, the demand for soup kitchens also increased and with a donation from Ireland, the WFP dedicated that to support soup kitchens in seven cities across Turkey.

“Over the three months, July, August and September, we will be providing a million meals,” he said.

The WFP also partnered with GIZ PEP- Promotion of Economic Prospects Programme, and the International Organization for Migration (IOM), along with the municipalities.

“Turkey has done so much by hosting almost 4 million refugees for so long. And now that Turkey, as other countries in the world, is hit with COVID-19. I think it is a very beautiful symbol that some of the funding we have now also benefits the Turkish population,” Grede said.

Apart from the aforementioned projects, in the six refugee camps in southeastern Turkey, in which about 55,000 refugees reside, the WFP, partnered with the Turkish Red Crescent (Kızılay), provides a monthly cash transfer of 100 Turkish Liras per person, Grede said. The program is financed with mostly U.S. and Japanese funding, he added.

The e-vouchers are only available to use to buy food at supermarkets inside the camps, Grede said, adding that it compensates what the refugees are most lacking: Food. After the pandemic, a financial aid of 1,000 Turkish Liras were also given per household in April and hygiene kits were distributed twice in the last six months.

According to a WFP survey, some 68 percent of the refugee camp residents, out of 55,000, lost some or all of their income from labor, Grede said.

“For half of them, cash assistance was the primary source of income, so that means the other half had other sources of income but that has now disappeared for a few months now.”

When asked if there are any confirmed COVID-19 cases among the camp residents, Grede said that there have not been “to their knowledge.”

If such a case or a suspected case occurs, the resident would be put in isolation and the food he or she would purchase from the stores in the camp would be delivered to them, he added.